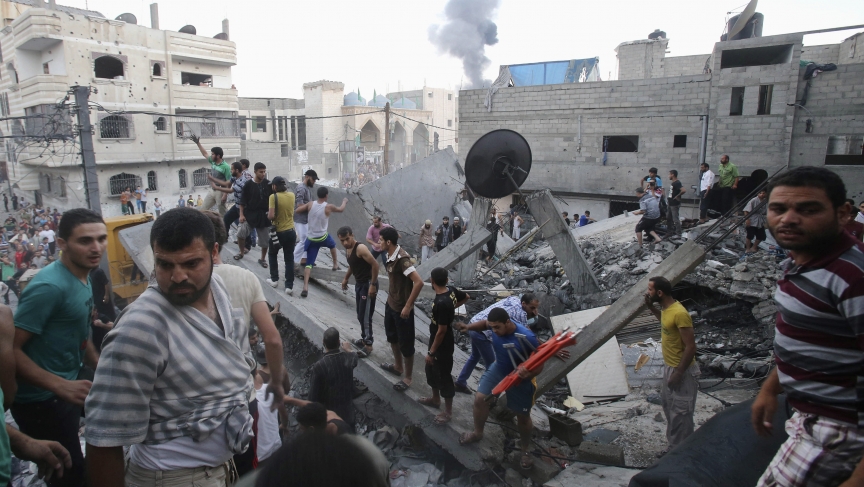 Smoke rises from buildings following what witnesses said was an Israeli air strike, as Palestinians search for victims under the rubble of a house which police said was destroyed in another Israeli air strike in Rafah in the southern Gaza Strip, on July 11, 2014.
Credit:

Even the elementary-school kids living in the Gaza Strip have been through it all twice before. The current round of violence between Israel and the Palestinian enclave is the third such outburst in just five years — nd nobody is talking about putting a stop to it any time soon.

Israel has attacked more than 1,000 targets in Gaza. In turn, Palestinian militants have fired more than 600 rockets at Israeli towns and cities. As of Friday evening local time, more than 100 Palestinians had died in Israeli air strikes, according to Palestinian officials. But there were no Israeli fatalities, thanks largely to the high-tech air defense system known as the “Iron Dome." Several injuries were reported in Israel, including at least one man who was wounded seriously in a rocket attack.

Dramatic scenes of destruction emerged from the Gaza Strip on Friday.

All the same, life must go on, as CBC reporter Derek Stoffel discovered at one Gaza City market.

Gazans go about life as bombs fall in their neighborhoods. This market was as busy as it is every Friday. #cbc #gaza pic.twitter.com/qes7Mk2tyP

But the situation is far from normal for the residents of Gaza who are living through this punishing round of military strikes.

“The situation is very confusing,” says Arwa Mhanna, a Gazan employee of the international charity Oxfam.

“All of a sudden, I can hear very huge explosions, very close to my place,” Mhanna says in an interview with PRI's The World from her home in Gaza City. “Then it goes to the calm maybe five minutes, maybe six hours. Then, it goes again to huge booms.”

The streets in her neighborhood are largely empty, and most shops are closed. “People are just staying home, because they are so scared to move around," she says.

Typically, during the month of Ramadan, which began at the end of June, Mhanna says she would be fasting during the daytime and then meeting up with family for itfar, the evening meal that breaks the fast. But she says that has not been possible lately, because moving around during the day — or even at night — is too risky.

“I have my family five minutes away from my place and I cannot even visit them since the beginning of the military operation,” Mhanna says. Instead, her relatives have been spending evenings on the phone to check in on each other.

On Friday, the United Nations expressed concern about reports of civilian casualties in Gaza. And the UN's top human rights official said Israel's air campaign might be violating international laws against the targeting of civilians.

“We have received deeply disturbing reports that many of the civilian casualties, including of children, occurred as a result of strikes on homes,” said Navi Pillay, the UN's high commissioner for human rights.

But neither Israel nor Hamas is giving any sign of being willing to be first to quit hostilities.

At a news conference Friday, Israeli Prime Minister Benjamin Netanyahu suggested that an end to the military campaign in Gaza is unlikely to come soon. “I will end it when our goals are realized," he said. "And the overriding goal is to restore the peace and quiet."

Netanyahu spoke on the phone with the leaders of some of Israel's closest allies, telling them that no country would tolerate such persistent attacks against its citizens. “No international pressure will prevent us from acting with all power,” Netanyahu said.

The Israeli legislature has authorized the call-up of 40,000 troops, the first step of a possible ground invasion of the Gaza Strip.

A spokesman for Hamas, Sami Abu Zuhri, issued a statement saying that an Israeli ground assault would be a mistake, and that “Israel would pay the price for its crimes.”