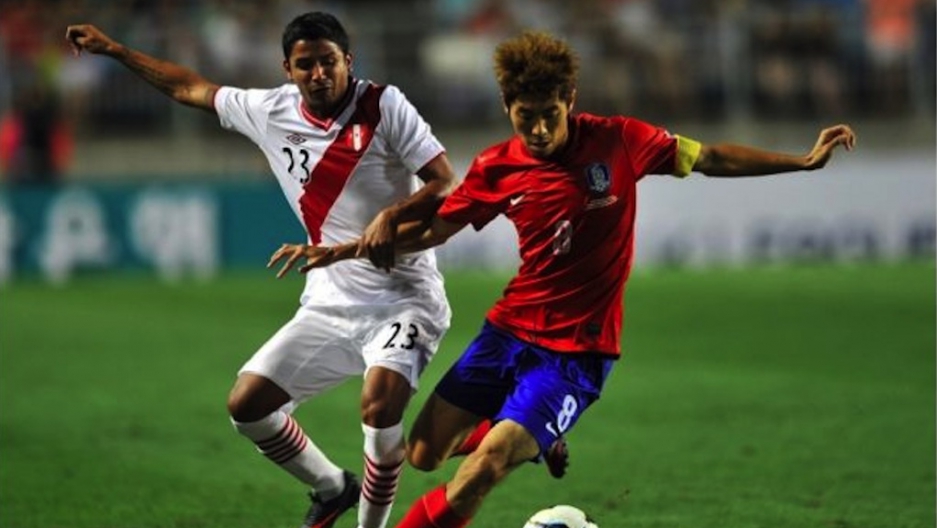 LIMA, Peru — Colombian soccer star James Rodriguez appears to have it all.

At just 22, he is the World Cup’s current top scorer, with six goals, and viewed by many as the standout player of the tournament in Brazil.

He also appears to be a good kid: hardworking, focused and grounded.

But there was a time when James (pronounced HA-mes), as he is known, labored in the shadow of an even more outrageously talented South American player, Peru’s Reimond Manco.

In the 2007 South American under-17 championship, Manco was named best player and Rodriguez runner-up.

Since then, however, the pair’s fortunes could hardly have been more different.

While the last few weeks have seen Rodriguez consecrated as a global megastar, Manco has been toiling away for Cajamarca — an Andean backwater where crowds average a few thousand — and fending off ever more unwanted comparisons with Rodriguez.

The reason appears as tragic as it is obvious. Manco, 22, just loves to party.

And not just a little bit. Here he is, caught on camera by one of Peru’s relentlessly salacious TV news bulletins, allegedly being carried home, literally, from a nightclub at 7 a.m.

As if that wasn’t bad enough, his nonchalant explanation in this interview was: “I fell asleep. What’s the problem?”

In case your Spanish is not up to snuff, Manco also adds in that interview that he expected his estranged model wife to carry on publicly accusing him of being an “alcoholic and pothead” because he would not give in to her demands for cash.

Yet Manco’s ability on the ball — when he tries — has never been in doubt.

Indeed, he possesses the kind of quicksilver trickery and Houdini-like escape skills reminiscent of Portugal’s Cristiano Ronaldo or Brazil’s Neymar, and for which top clubs in Europe pay tens of millions of dollars.

Check him out in this highlight reel, electrifying the crowds while also penetrating opposition defenses like a hot knife through butter:

After the South American youth championship, Manco was snapped up from Peru’s largest club, Alianza Lima, by PSV Eindhoven, the Dutch team that Brazil legend Ronaldo used to trampoline to mega-success in Europe.

Manco enjoyed a brilliant start at PSV, coming on as an 81st-minute substitute in his first game and in just 10 minutes inspiring the Dutch giants to draw a match they had been losing 2-0.

Manco playing for PSV Eindhoven against Everton in Liverpool, England on Aug. 9, 2008.

But things soon began to unravel. With the 18-year-old starlet unable to adapt to life in Holland, PSV Eindhoven lent him back to another Peruvian club, Juan Aurich. From there he made his way to Mexican side Atlante.

But Atlante promptly fired Manco after he turned up late for training, allegedly smelling of booze and complaining he had been kidnapped — a claim police subsequently dismissed as, well, BS.

Upon his return to Peru, instead of playing soccer, Manco managed a stint in local reality show “Amigos y Rivales” (Friends and Rivals), before the Cajamarca team eventually threw him a lifeline.

Even with Cajamarca, Manco has once again been accused of drunkenness. But, as a small club, they have been reluctant to give their star player the boot.

For Peruvians, Manco’s tale epitomizes everything that’s wrong with Peruvian soccer, and above all their players’ supposed lack of desire.

Many feel that as soon as a promising youngster from a poor family buys his first house and car — not to mention, dates his first model — he thinks: “I have already made it.”

Others blame Manuel Burga, the president of the Peruvian soccer federation, for their national side’s disastrous performances.

Peru has failed to qualify for every World Cup since 1982, no small feat for a soccer-mad Latin American nation of 30 million people.

Had Manco lived up to his enormous potential, that run just might have come to an end this year.

What’s worse, Peruvians have had to watch as neighbors — and fierce rivals — Chile and Ecuador repeatedly make it to soccer’s ultimate tournament. Even Bolivia, one of Latin America’s weakest sporting nations, qualified for the 1994 World Cup hosted by the United States.

Burga’s approval rating has been as low as 2 percent, while 97 percent want him to resign for failing, among other things, to clean up Peruvian soccer or ensure a better system to develop young talent.

Those kinds of numbers likely give Burga a strong claim to being the most hated Peruvian alive. Not bad when you consider that his rivals for that title include Abimael Guzman, the leader of the brutal Shining Path rebels, who triggered a war in which nearly 70,000 died.

As for Manco, most Peruvians just shrug at any mention of his name.