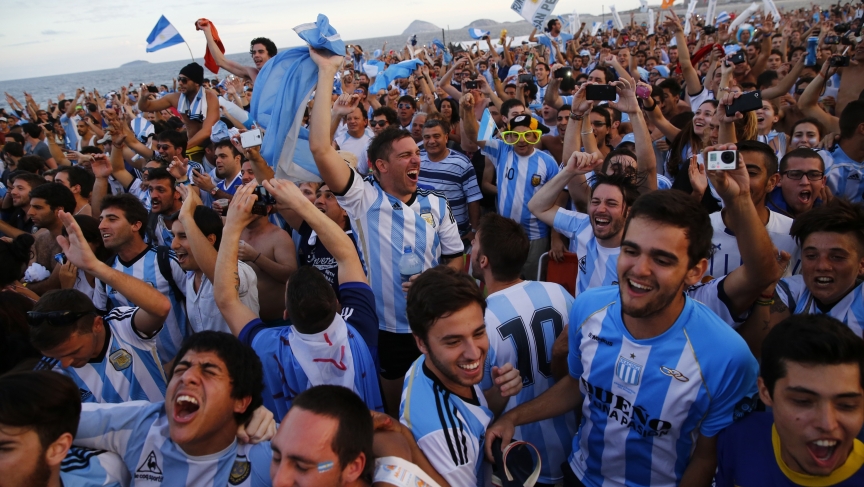 Argentinian soccer fans have descened on Rio de Janeiro for the World Cup final, and they're singing a tune that is none too popular with their Brazilian hosts.

Brasil, decime qué se siente, tener en casa tu papa — Brazil, tell me how it feels, to be bossed around in your own home.

The song uses the tune of Creedence Clearwater Revival's Bad Moon Rising and has become increasingly popular and includes references to Italy's World Cup tournament in 1990, where Germany took the title and Argentina placed second.

The song will remain popular as Argentina prepares to take on Germany in the World Cup final. Brazil, on the other hand, was ousted after giving up seven goals and scoring just one against Germany, Argentina's final opponent.

"Brazil's elimination by [six] goals, which is a huge score line for football — it's just not what we're used to in World Cup terms and the Argentina fans have kind of added joy to this," said Marcela Mora y Araujo, a journalist from Argentina.

Araujo spent a month in Brazil covering the World Cup and says the song is all anyone chants these days and has even replaced the jingles on some news shows in Argentina. The song makes references to Argentina's past soccer victories against Brazil and issues a warning that Brazil will see Argentinian soccer star Lionel Messi later in the World Cup.

Argentina only has two World Cup titles to their name whereas Brazil has five. "So a third would put them on a path to equally," Araujo said. "It has particularly added joy that the hosts are having such a hard time and have lost so badly, so historically badly. It's reignited hope of achieving glory."

The song has gone viral and Araujo points out that the chant is especially popular because it doesn't use profanity.

"It's not obscene, it doesn't use swear words, it doesn't allude to sexual acts. So that's probably why it's taken off so well in mainstream culture and maintream TV," said Araujo.