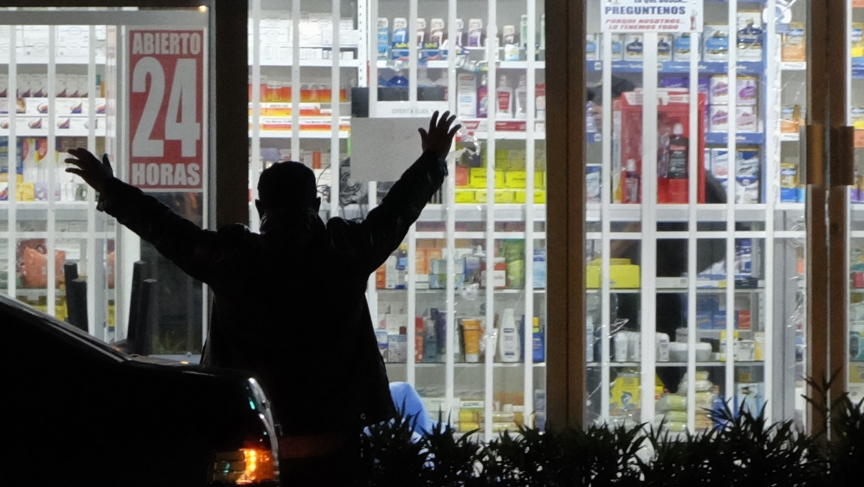 Mynor Guevara speaks to a colleague after he barricaded himself in the Guatemala City pharmacy where he shot activist Patricia Samayoa. She was the sixth friend of journalist Jill Replogle to die in the past five years in Guatemala.
Credit:

Violence in Guatemala — the same violence that has sent tens of thousands of children streaming over the border seeking refuge in the United States — is becoming so pervasive that it can touch anyone, even those who don't live in the country anymore.

On the day Guatemala's 1st lady says kids aren't fleeing violence there, a paper counts 12 murders. The next day, my good friend is a victim

But the victim, activist Patricia Samayoa — Paty to her friends — is just one of six Guatemalan friends who Replogle has seen die over the past five years. That, she says, "seems like a lot for one gringa who lived there for less than a decade." It's a measure of how widespread crime and death have become.

Samayoa once fled Guatemala during the country's civil war, which ended in 1996 after more than three decades of fighting between the government and leftist groups. "Back then she was part of a student movement that was being targeted by death squads, and so she had to leave," Replogle says.

But she later returned and spent 14 years working for the Guatemala City government, running a program that tried to empower women in poor areas to take more control of their lives. "She was really dedicated to making Guatemala a better place," Replogle says.

Then, last week, Samayoa stopped for a routine errand. "She walked into a small pharmacy in Guatemala City to purchase something and, under still-very murky circumstances, she was shot and killed by the security guard," Replogle says.

According to Prensa Libre, a Guatemalan newspaper, police said Samayoa was shot after being caught up in a robbery attempt at the pharmacy. But Replogle says there were potentially other factors at play.

"There are definitely some factors to indicate that the guard was not in his right mind," she explains. "He holed up in the pharmacy after he shot her, wouldn't let anyone near the body for about an hour and even shot and wounded one of the police officers who arrived at the scene."

Prensa Libre also reported that the company that hired the guard who shot Samayoa had been repeatedly sanctioned for failing to properly screen and train its guards. In the United States, such issues might be relatively small concerns. But in Guatemala, there are 150,000 private security guards — as many as five times the number of police.

"Almost of all of the stores, no matter how small and how little merchandise or money it seems like they might have, they almost all have armed guards," Replogle says.

At first, that glut of guards was a legacy of the long-running civil war. "After the war, there were, frankly, a lot of unemployed killers," Replogle recalls. As drug violence ramped up and gangs proliferated, she says, "the industry just boomed."

Today, while demand hasn't decreased at all, the guards come from a different source. "It's a lot of displaced agricultural workers, a lot of people from rural areas," Replogle says. "They can't find jobs there, so they move to the city and one of the easiest jobs to get is as a private security guard."

There is little Replogle can say to soften the picture of life in Guatemala. Killings like this make it harder to convince people stay and work for their country as Samayoa did.