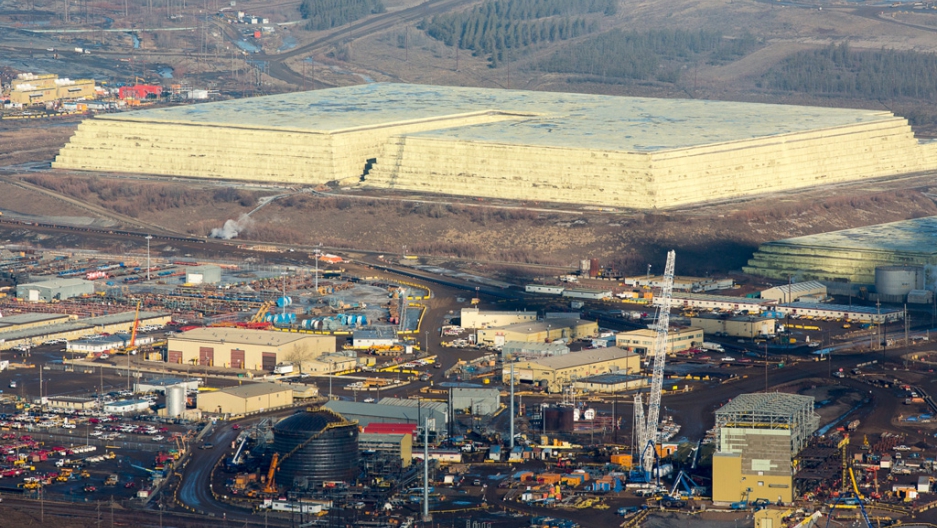 FORT MCMURRAY, Alberta, Canada — The four-seat plane we’ve hired circles one of the factory complexes owned by Suncor, one of the world’s largest processors of bitumen, a gooey crude oil found in subterranean deposits mixed with water, sand and clay.

The aircraft rolls, lifting its right side and revealing a careening panorama of industrialized land through photographer Alex MacLean’s open window. The complex in the foreground, called an “upgrader,” ingests raw bitumen ore and expels synthetic crude.

It’s a half a square mile of steel tanks, smoke stacks, hulking factories and silver pipes. An even bigger upgrader, similarly outfitted, looms in the distance. On the periphery of that one, workers have cast bright yellow blocks of sulfur — a byproduct of bitumen processing — into four huge, unfinished pyramids. Some are nearly as bulky as the Great Pyramid of Giza.

This is some of what we can see above the Athabasca (or Alberta) tar sands, also known as oil sands, the world’s largest deposit of extra-heavy crude oil. According to the Canadian Association of Petroleum Producers (CAPP), mining of tar sands has disturbed nearly 300 square miles of forest and peat marsh, known as muskeg. It has created more than 70 square miles of toxic settling ponds, most of which await cleanup. CAPP downplays and normalizes this vast land transformation of virgin forest.

Canada’s environmentally concerned citizens, often in tandem with indigenous activists, have drawn a symbolic line in these tar sands—they flat out oppose further exploitation of this huge deposit. They invoke, among other arguments, 19th-century treaties that protected Indian rights to continue such traditional activities such as harvesting walleye, moose and blueberries. Mining has obliterated hunting grounds. Over an even larger area, mercury contamination has befouled fish and birds.

From up here, 1,000 feet above a deeply gouged, gray vista of rubble that used to be bogs and forest, it’s plain that the tar mining and refining industry have turned this region inside out. The companies that profit from digging out the ore say they will clean up these huge sites after they’re done digging out ore. They say that they’ve in fact stored peat bogs that previously carpeted the land for later replanting.

Steven Smith, a vice president of Alberta Energy Regulator, the agency with primary oversight of oil sands activities, says his office requires that the sites be restored, virtually to their pristine state. He’s confident that industry will do it.

“Some of best minds and science are working toward that end,” he says.

For decades industry executives and regulators denied what seems obvious even to a casual observer of dust clouds trailing mammoth dump trucks and effluent blossoming from factory stacks: that tar sands mining and processing spreads pollution beyond company fences. In recent years, however, independent studies of air and water pollution have made such assertions impossible to defend. Now mining spokesman and regulators tout a $50 million-per-year, industry-funded monitoring program that could, in time, indicate if the industry poses any threats.

“The key for us is for the data to be out there,” says Greg Stringham, a vice president at the Canadian Association of Petroleum Producers.

Steven Smith of the Alberta Energy Authority says the monitoring campaign will help his agency do its job. “Our interest is to make sure we understand the problem well. You manage what you measure and measure what you care about.”

The aerial photographer Alex MacLean has leaned out of small aircraft all over the world. His photos offer fresh perspectives on familiar experiences. His photo of a freeway near my home in Boston, for instance, opened my eyes to the twisted knot of rush hour cars arriving at a local interchange, that unfurls farther down the road. He’s invited me join him in Alberta, flying over these Alberta mines. Few people in the US have seen tar sands. US citizens have become concerned with the Keystone XL pipeline but not generally with where the oil originates.

Yet, as Alex predicted, overhead shots of the vast destruction on the ground illustrate further the human and natural costs of the proposed Keystone XL project.

In Fort McMurray, Alex rented a Cessna 172, the most popular plane ever built. It feels flimsy — more golf cart than limousine. Alex had told me I’d be sorry if I looked down to take computer notes during the flight. Keep your eyes on the horizon — avoid air sickness, he’d said. I hadn’t listened, to my regret.

Alex is clearly in his element, though, 1,000 feet aloft above the mines. He’s not wearing his lap belt — that would restrict his movement. His door keeps popping open and he’s compensated by wedging himself into the cockpit. He flips his window latch and pokes a camera out, steadying the lens against his hand. His face stretches into a grimace pressed against the eyepiece. He clicks the shutter. “Raise the wing,” he tells the pilot, setting up for another shot.

From the vast strip mines below, dust billows behind giant dump trucks bearing 400-ton loads of newly dug tar sands ore. I see at least a dozen of the mammoth trucks below. They operate 24 hours a day. Mining companies chase bitumen veins hundreds of feet below the surface. But the profundity of these depressions barely shows from the air. The land just looks razed and scarred, from horizon to horizon across dozens of miles in every direction.

The companies’ vast factories remove unwanted liquids and solids from ore. The extracted bitumen ends up hundreds of times thicker than light crude oil, generally too viscous to transport by either pipeline or truck. Upgrader plants come next, mile-square yards of pipe, tanks and stacks. They convert the bitumen into synthetic crude oil, thinner and fit for shipment.

Light glints off scores of wastewater ponds. Many hold tailings—the dregs after desirable constituents are removed from ore. Toxic wastes emanate from each stage of oil production, from digging right on through distribution of final product. All along the way, the oil producers release waste mixed with toxic compounds into air, land and water. Through nearly half a century of such work, the huge factories have filled dozens of ponds with a combined surface the size of Manhattan and a volume that could bury that entire fuel-hungry island in two stories of poisonous sludge

David Schindler, a freshwater biologist and chemist, has been calling attention to the environmental impacts of tar sands mining for several decades. Perhaps he seemed like the boy who cried wolf at first. But his early concerns have been borne out. He’s now an emeritus professor at the University of Alberta, and at this stage of his career, he speaks bluntly of the industry’s effects.

"You could fly a plane full of village idiots selected from around the world over that area and ask them 'Yes or no, is this significant environmental impact?’ Schindler says in an office crammed with stacks of industry studies. “I don’t think any idiot would dispute that. It’s a horrible impact."

Industry spokespeople and provincial regulators constantly insist that Alberta's tar sands can be exploited without permanently polluting the region. They say the huge and growing mountains of waste materials associated with tar sands mines are stored securely and will eventually be either rendered harmless or permanently buried.

They say yes, pollutants are released into the air but that they are diluted and of no significant consequence.

View south to Syncrude's Mildred Lake site, where bitumen is extracted from oil sands. Tailing pond is in the foreground, with steam and smoke rising from the upgrading facility behind it. (Alex MacLean/GlobalPost)

Stringham, the Canadian Association of Petroleum Producers vice president, acknowledges that the industry “does have an environmental impact,” including release of pollutants. But, he says, “the levels are below concern.”

Recent studies by the Canadian government and the University of Alberta, among others, call these assurances into question, and some scientists not employed by the oil companies speculate that the oil industry’s sudden enthusiasm for environmental research — after denying for so long that contamination off site was even a possibility — is a tactic for further delay. All five representatives from aboriginal communities appointed to a committee overseeing the environmental program have resigned. A representative of the Fort McMurray First Nation said that their concerns had been ignored.

Environmentalists and outside scientists often say that government officials appear to be working in cahoots with the companies to prevent actual regulation of the industry.

A year ago environmentalists and some Canadian newspapers howled after the Alberta Minister of Energy appointed Gerry Protti as board chairman of the Alberta Energy Regulator, the agency with primary oversight of tar sands activities. Protti had served as founding president of the Canadian Association of Petroleum Producers and had held high positions at several large energy companies.

“We have a government that is basically a servant for the industry,” says Kevin Timoney, an ecologist and environmental consultant. “The whole concept of the resources being for the benefit of the people has been lost.”

This story was made possible in part by a travel grant from the Pulitzer Center on Crisis Reporting. You can support Dan and Alex's next reporting project on the tar sands here at Indiegogo.