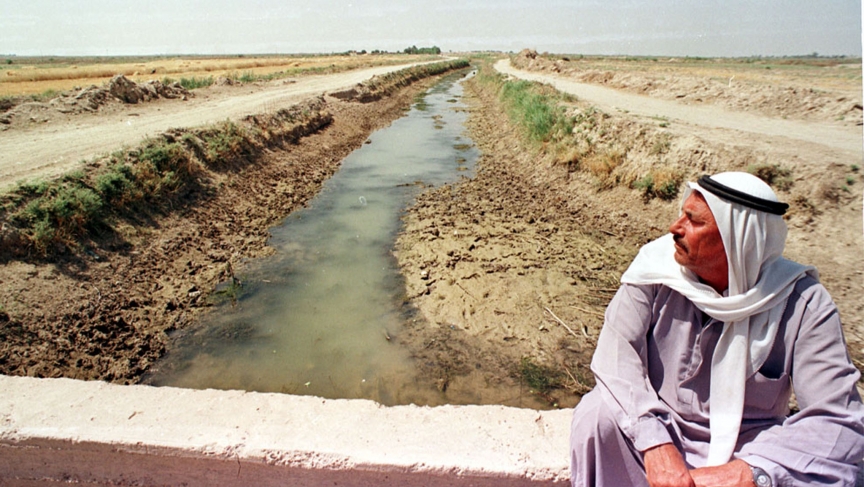 An Iraqi farmer sits beside river hit by the drought in the Iraqi province of Dayala, about 30 miles north east of Baghdad in this photo taken back in July 10, 2000. Drought has been a problem in the region for years, with some meteorologists believing parts of the Middle East could become inhospitable to live and farm.
Credit:

Natural resources — or the lack of resources — can be a potent force in war or can create social unrest that leads to political unrest. In Pentagon-speak, it's called a "threat multiplier," and water is being used right now as a multiplier in Iraq.

According to a report by meterologist Eric Holthaus, militant groups in Iraq are taking advantage of the country's drought, squeezing Baghdad by controlling the water flow to the capital. "ISIS is starting to use dams as weapon of war," he says. "So they've made [it] high on their list to take over those dams and control the water downstream."

In places like Mosul, the city in northern Iraq where ISIS (also referred to as IS) began its current string of conquests, they've already done so. That allows them to control the flow of water to the Shiite areas in the south. Reporter John Vidal, in The Mail and Guardian, explained how the Iraqi goverment is scrambling to defend its natural resources:

"Last week Iraqi troops were rushed to defend the massive 8km (4.9mi)-long Haditha Dam and its hydroelectric works on the Euphrates to stop it falling into the hands of IS forces. Were the dam to fall, say analysts, [ISIS] would control much of Iraq’s electricity and the rebels might fatally tighten their grip on Baghdad."

With the drought continuing, the amount of water will only shrink, increasing its importance and making it all the more valuable to control. And global climate change is likely to make Iraq warmer and drier, another bad sign for future stability.

In a study published the journal Science, researchers from UC Berkeley looked for links beteween aspects of climate change and violence. In every one of the previous studies they examined, they wrote, there was "a positive relationship between high temperatures and greater violence."

While the study is new, such knowledge is pretty old. The connection between weather and political unrest does and will continue to play a part in Iraq.

And while climate change certainly isn't the root cause for unrest in Iraq or the rest of the Middle East, Holthaus says that climate change isn't making life better in the region.

"If you have persistent drying and more frequent droughts, more weather instability and higher temperatures, then that's aggravating the situation," he says. "If you have an underlying tension, [climate change] gives it more and more chances for that tension to explode into violence."