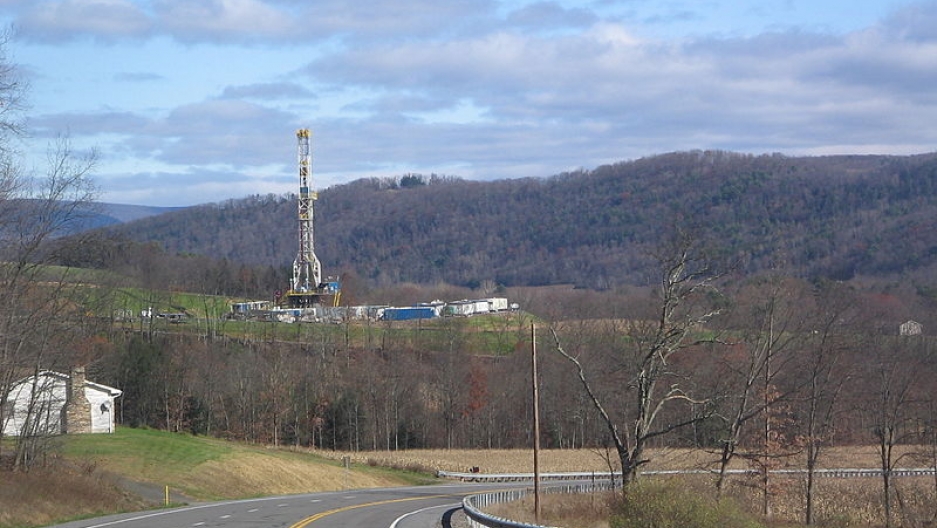 At the Chemung County landfill in Elmira, New York, piles of drill cuttings from Pennsylvania shale oil wells are scattered around the yard. The cuttings look like heaps of wet black sand, wrapped in a black plastic liner — and they're radioactive.

Those radioactive drill cuttings — the waste pulled to the surface when a new well is drilled — are opening a new front in the already-contentious battle over hydraulic fracturing, know as fracking.

All rocks have some radiation in them, explains Matt Richmond, a reporter for WSKG and the Allegheny Front, who has been following the story. But the Marcellus Shale in the eastern US, one of the regions where fracking is booming, is an unusually radioactive underground formation. A recent study found radiation levels three times higher than in other rock layers.

States in and around the fracking boom are trying to figure out what to do about all this naturally radioactive waste from drilling. Pennsylvania is conducting a study of radiation in the Marcellus Shale. West Virginia passed a law to segregate drill cuttings within landfills. New York State has a moratorium on fracking, but it accepts radioactive drilling waste from nearby Pennsylvania — and that has touched off an intense debate.

Larry Shilling, vice-president of Casella Waste Systems, which operates the Chemung County landfill, says the site has never accepted a load of cuttings that exceeded acceptable levels of radiation. In fact, he wants New York State regulators to allow the company to accept even more cuttings from Pennsylvania.

But not everyone is convinced this landfill is taking sufficient precautions. Gary Abraham, an environmental lawyer in Western New York who is working to block Casella from expanding its landfills, says there’s so much radiation in the deep shale rocks that it must inevitability be entering landfills.

He points to radioactivity readings taken by New York State regulators of the salty water found in the Marcellus Shale. This water, which comes up during and after fracking, is called brine. “The radioactivity of the brine is as high as 15,000 picocuries per liter,” Abraham says. “The background radiation at the surface of the earth in New York is about 1 picocurie per liter.”

Larry Shilling, however, argues that while brine can be radioactive, the drill cuttings he accepts at his site are benign. In fact, he says, testing his site commissioned on the Marcellus cuttings showed very little radiation. “The highest reading we got from any of those four samples was 4.3 picocuries per gram, still under the cleanup standard that EPA set for cleaning up sites,” he says.

Part of the difficulty with this debate is that the parties are talking past each other: Abraham is looking at the brine associated with the Marcellus Shale and raising the red flag; Shilling is focused on the rock and giving the green light.

Avner Vengosh, a geochemist at Duke University, looks at both sides. He says there’s a risk that, once radium locked deep underground gets into streams and rivers, it will make its way into fish and eventually into people.

The particular form of radium found in the Marcellus Shale, radium-226, has a half-life of more than 5,000 years. Once it gets into the environment, it’s there for good.

“Radium is very similar to calcium,” Vengosh says. “As a result, it would accumulate in the bone ... which would lead to bone cancer.” In a stream near one plant that processes fracking wastewater in Pennsylvania, Vengosh has found radium at 200 times the background level.

Since contaminants started showing up in streams, Pennsylvania has tightened restrictions on the disposal of wastewater. But the treatment of solid waste at places like the Chemung County landfill in New York concerns Vengosh.

“Every contaminant that’s being disposed into landfills — the solids — are subject to numerous attacks of acids and different chemicals, different solutions within the landfill,” says Vengosh. “And they’re creating what we call leachate.”

Leachate is basically "garbage tea." Anything that’s in the landfill, like radium, can get into it. What happens to leachate? It ends up at wastewater treatment plants — but the Chemung County plant that serves the Casella landfill can't test for radium.

Casella does its own quarterly radiation test of its leachate. Results showed low levels of radium-226, but each testing showed a small increase.

Fracking is still a relatively new technology and its rapid expansion has outpaced the ability of regulators and activists to track its effects on the environment. It may be years before researchers can gather enough data to draw firm conclusions.

And even then, given the polarized state of the wider environmental debate, we may never agree on what those conclusions suggest we should do.