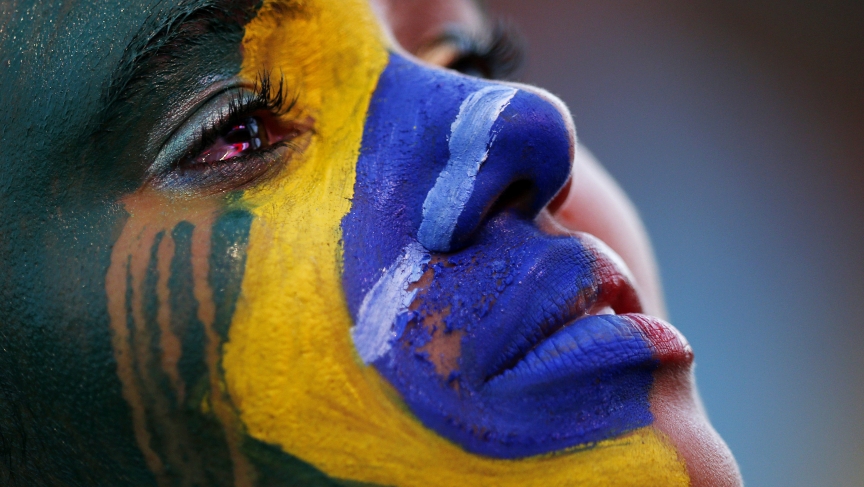 A Brazil fan cries as she watches the 2014 World Cup semi-final between Brazil and Germany at a fan area in Brasilia. Germany scored five goals in 18 astonishing first-half minutes on their way to a 7-1 semi-final mauling of Brazil on Tuesday.
Credit:

At the end of his country's brutal 7-1 loss to Germany, Brazilian defender David Luiz was in tears as he walked off the field. He and his team had hoped to bring joy to Brazil as it hosted the World Cup. Instead, the team made their countrymen cry.

“It’s not the happiest day of my life,” says Bruno de Almeida, senior editor for soccer for the Brazilian broadcaster Globo Esporte.

According to de Almeida, Tuesday’s loss will go down in history — much like Brazil's loss to Uruguay in the 1950 World Cup final, which was also hosted in Brazil. The score for that game was just 2-1 in favor of Uruguay, but it's considered a "national tragedy."

De Almeida covered yesterday's game and had to follow the golden rule of sports reporting: no cheering — or jeering — in the press box. He was forced to hold back his distraught feelings as Germany scored over and over again.

“What they said defines what most Brazilians are thinking now," says de Almeida. "The old man said, ‘It’s like I lost a beloved relative.’ It’s a very sad day, a mix of anger and shame."

The anger, he says, is about more than just a poorly-played game: “It’s about the whole World Cup, all the infrastructure that was promised and not delivered. It’s also about the hope that we had in the national team."

President Dilma Rousseff, who pushed the unpopular and expensive World Cup project, is in particular trouble as she prepares for her re-election campaign later this year. “[W]e had a very expensive World Cup and lots of infrastructure things they didn’t deliver. They promised big airports, big roads and, well, not all were delivered.”

Is this all being overblown? After all, it’s only a game.

“I have to agree it’s only a game,” says de Almeida, “but it’s difficult to say that in a culture where football is so close to our hearts."

Read our story about how Germans reacted to their unexpected win.