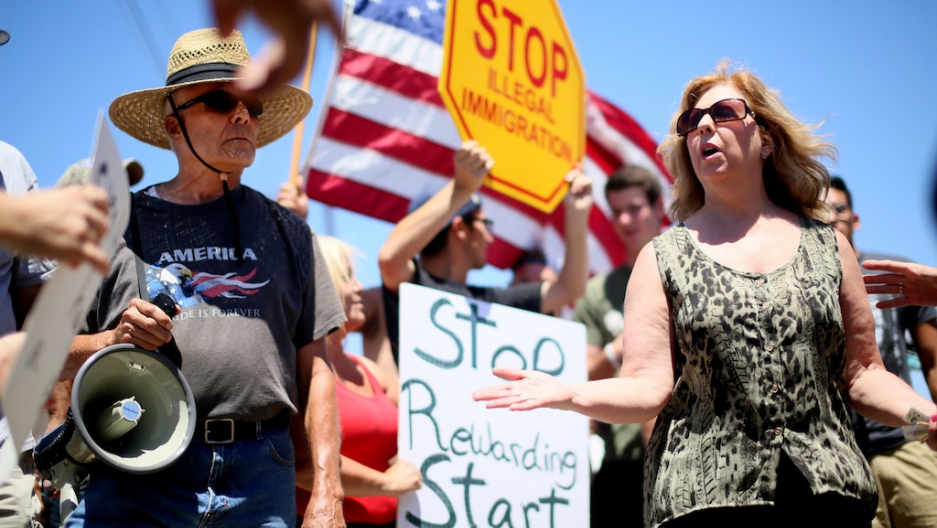 Immigrant rights activist Mary Estrada, R, debates policy issues with anti-immigration demonstrators during a protest outside of the US Border Patrol Murrieta Station in Murrieta, California on Monday, July 7, 2014. Immigration Protesters have staged rallies in front of the station for about a week in response to a wave of Illegal Immigrant children caught along the US Mexico Border in Texas and are supposed to be temporarily housed at the facility while awaiting deportation proceedings.
Credit: Sandy Huffaker
Share

The Obama administration on Monday said it plans to deport most of the thousands of unaccompanied minors that have poured over the US-Mexico border in an unprecedented surge that has overwhelmed Border Patrol, roused angry protesters and ratcheted up partisan rhetoric in DC.

The announcement came one week after President Obama assured immigration advocates that he would “keep his promise” and press on with executive action, asking Congress for $2 billion in emergency funds to aid in the housing, feeding and processing of those who have been apprehended.

More than 52,000 unaccompanied, immigrant children traveling from Central American countries have crossed the US border in Rio Grande, Texas, since October. Obama last month called the surge a “humanitarian crisis.” In its initial response, the US Department of Justice (DOJ) implemented a $2 million legal aid program to assist the children, and ordered the opening of additional emergency shelters and facilities throughout Texas, California, Arizona and Oklahoma to house the immigrants as they made their way through the legal system.

In the time since, the humanitarian crisis has spurred a policy crisis, pinning the president against a Republican-run house.

Pressure on Obama has snowballed since early June, when news of the increasing number of unaccompanied minors journeying to the US border erupted. Immigration advocacy groups have, on one side, pushed for the president to take executive action on immigration reform — to bypass a Congress that would not act on a bill passed last year by the Democrat-controlled Senate. When he did not move fast enough, Janet Murguia of the National Council of La Raza now-famously branded him the “deporter-in-chief.”

He has simultaneously been under fire from Republicans who say the president should have seen the crisis coming, and who have blamed his immigration policy for the start of rumors throughout Latin America that children arriving to the US alone would not be sent back. Democratic Texas Rep. Henry Cuellar, whose district sits alongside Rio Grande Valley, where much of the influx has taken place, said Obama has been "one step behind."

On June 24 House Speaker John Boehner reportedly told the president that there would be no votes on immigration before the midterm election, but that he should hold off on taking the matter into his own hands because “he believed there was a good chance a comprehensive bill could pass in the next congress.”

In response, the president reportedly said “sorry about that. I’m going to keep my promise and move forward with executive action soon.”

Still, he told immigration groups, “we are a nation with borders that must be enforced,” and said he had to implement the law even when it comes to difficult cases involving children.

Those who have been apprehended “will go through the immigration court process”— they will automatically be allowed to apply for asylum — White House spokesman Josh Earnest said on Monday, though it is “unlikely” that most will qualify to stay in the US.

International humanitarian aid group Save the Children has created “child-friendly spaces” within shelters housing the families while they await their court dates. In them, children can play, paint and read books written in Spanish. Though one of the organization’s purposes is to initiate programs like this one, their work most often takes them to conflict zones or emergency areas like South Sudan, Syria, or New Orleans following Hurricane Katrina. This is the first time Save the Children has worked on the US- Mexico border.

“You know, the journeys have been very hard,” Carolyn Miles, CEO of Save the Children USA, told NPR. “A lot of these families are going, you know, more than a thousand miles — buses and trains and walking for — one little boy told me he walked for three days at the end of his journey to get to the border. So the journeys have been pretty tough.”

The Obama administration also plans to devote an estimated $100 million to aid in Guatemala, Honduras and El Salvador — to go toward the safe return of the migrant children, and to improving conditions so they can stay there.

It is also putting $161.5 million toward programs intended to help Central American countries “respond to pressing security and governance challenges.”

The House Homeland Security Committee held a hearing on Thursday in McAllen, Texas — where much of the immigration story has played out — while President Obama spent the Fourth of July welcoming 25 new US citizens as they pledged their allegiance in a White House naturalization ceremony. While the president is in Texas this week for fundraisers, White House officials have said he has no plans to visit the border, despite Texas Gov. Rick Perry’s call for him to do so.