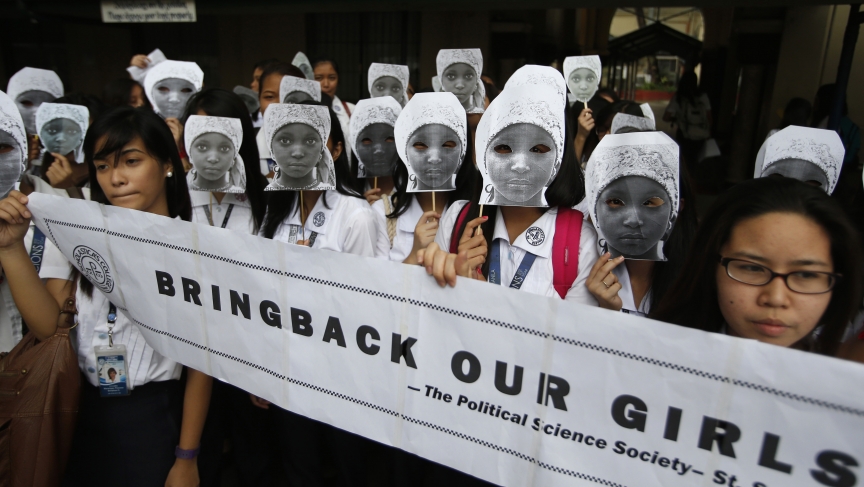 It's just shy of a hundred days since 276 girls in northern Nigeria were abducted by Boko Haram, the Islamic extremist grourp. And Nigeria has seen more bombings and abductions since the girls vanished.

Just yesterday, Nigerian officials announced that another group of girls and women, who were abducted a few weeks ago, actually managed to escape. But journalist and lawyer Chude Jideonwo says it's difficult to distinguish fact from fiction in Nigeria's many kidnapping cases.

"Three weeks ago, when these girls were kidnapped in a village called Damboa, the Nigerian security forces denied the reports that more women had been kidnapped," Jideonwo says. "So it was really strange to see the same forces now say that the women, that hadn't been kidnapped, had been released. It symbolizes the confusion behind the rescue efforts."

Jideonwo says the fate of the 276 girls kidnapped in mid-April, the ones who gained worldwide attention, is equally unclear. In May, Nigeria's chief of defence staff, Air Chief Marshal Alex Badeh, said the armed forces knew the exact location of the missing girls. But last week, another military spokesperson admitted Nigerian officials did not know where the girls were.

"It's just a pretty distressing state of affairs," Jideonwo says. "It's almost like they're kidnapping the girls again."

Daily demonstrations in support of the missing girls are still held in the Nigerian capital Abuja, under what Jideonwo calls "the most relentless, shameful attacks by the Nigerian government."

Nigerian banned demonstrations in support of the girls in early June, but protestors took their case to court and received an injunction against the government that kept the sit-ins going. In response, Jideonwo says, Nigerian authorities withdrew security protection for the protestors and shipped in counter-protestors who attacked those advocating on behalf of the missing girls.

But the Nigerian lawyer and journalist also blames his country's citizens for not maintaining sufficient resolve in the face of the abductions and explosions that now rock the country's major cities.

Jideonwo says he was appalled at the response to the bombing in June in Abuja, which happened just before the World Cup. "We tweeted for a few minutes and there was outrage, it trended and then we're back to watching football and tweeting about football," he says. "We can't afford as citizens to let this become a way of life."

He also wonders what lies ahead for his country. Jideonwo recalls a conversation he had with an Israeli stranger in an elevator, who said to him, "You see what's happening in Iraq? It looks like Boko Haram wants to do the same in Nigeria ... the Islamists want to run down your country and take over the government."

Jideonwo says his immediate reaction was disbelief. "It can never happen, you know, because it is just a fringe group in the northeast," he told the Israeli man.

The Israeli answered, "Well, that's how it started in other parts of the world. And if your government isn't winning the war, isn't stopping the bombs from spreading to other states, then give me one good reason why what is happening with ISIS in Iraq will not happen with Boko Haram in Nigeria."

Jideonwo says his ultimate response was stark. "Honestly, I take no pleasure in saying this — I honestly couldn't and still can't think of a legitimate, logical response to such a question," he says. "Because no matter what the government tries to say in Nigeria, we are not winning this war against terror."

Still, Jideonwo stays he hasn't given up hope that the girls might be rescued.

"For me, they are a symbol of a steady march toward anarchy. I take no pleasure in using bombastic words, but that is the reality of our situation," he says.

"It's a steady march. They represent for us our failure as citizens because many of us allowed the government to get away with these things. We let them divide us on the basis of religion and ethnicity."

If those girls are rescued and brought back home, he says, "then the bit of faith we have in our country and its future can begin to be restored."