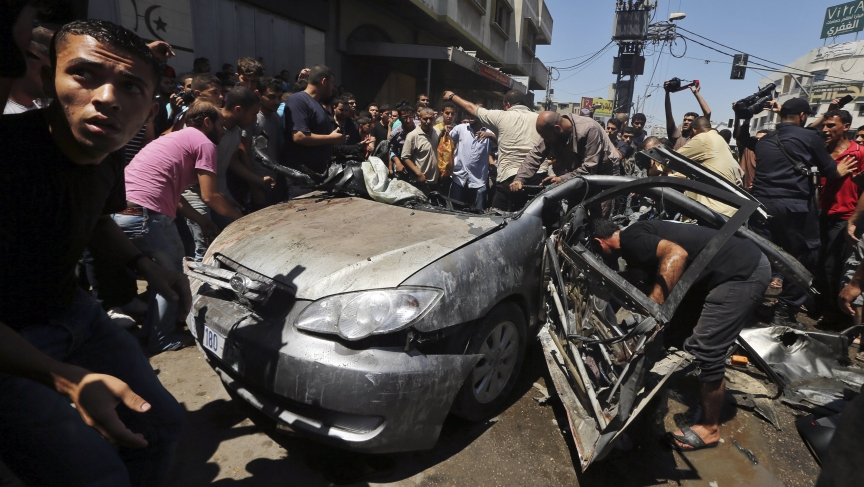 Palestinians in Gaza City gather around the remains of a car which police said was targeted in an Israeli air strike on Tuesday.
Credit:

Across Israel and the Gaza Strip on Tuesday, things looked and felt a lot like the run-up toward another war.

The Israeli military launched a major bombing campaign against Gaza, while Palestinian militants fired volleys of rockets into Israel. Air raid sirens wailed in Tel Aviv and Jerusalem, a rarity for people in those major cities, sending civilians running for cover.

In Gaza, Palestinian officials reported that at least 15 people were killed by Israeli air strikes by early evening local time. In Israel, there were no reports of casualties caused by rockets from Gaza, at least one of which was intercepted by the Iron Dome anti-missile system.

Long range rockets fired by militants in the Gaza Strip flew about 50 miles into the vicinity of Jerusalem, another rarity. This was the first such instance since late 2012 and only the second time ever that Gaza-launched rockets flew that far. Israelis consider Jerusalem their capital city, which is revered as a holy place by Christians, Jews and Muslims worldwide.

Israeli officials, including the Jerusalem mayor, broadcast emergency procedures for the Israeli public.

Red alert in Jerusalem. Residents, follow instuctions from Home Front Command re: how to respond when hearing alarm http://t.co/VsvrQY8wk1

For the latest developments, you can read more in live blogs from The Guardian, the Times of Israel and GlobalPost.