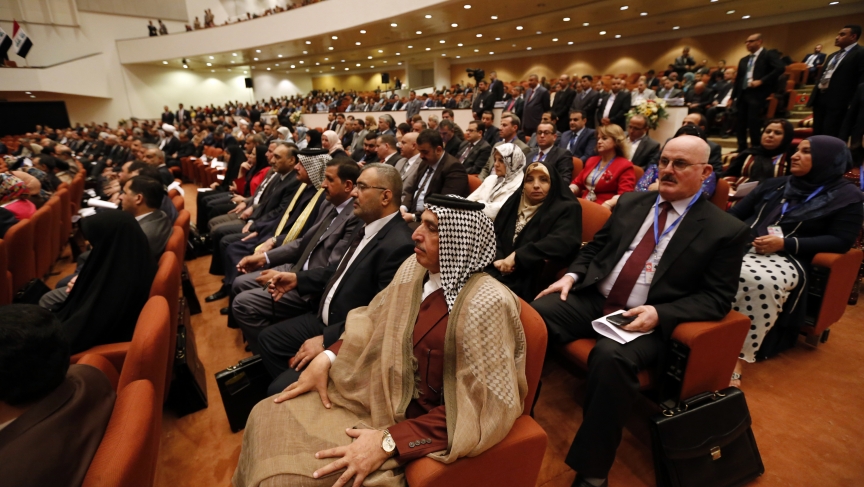 Members of the new Iraqi parliament attend a session at the parliament headquarters in Baghdad, July 1, 2014. Mehdi al-Hafidh, acting speaker of Iraq's newly elected parliament, said the first session had been adjourned without settling on a new speaker.
Credit:

Iraq is a mess right now — on many levels.

Yes, the insurgent group ISIS controls large parts of the country north and west of the capital, and Baghad has been suffering from a series of suicide attacks. But the turmoil extends into Baghdad's Green Zone — into the newly-elected Iraqi Parliament, to be precise.

Politicians there can't agree on forming the next government, starting with the speaker of the house. Once the speaker is selected, parliament has two weeks to choose a president and two vice presidents, and a month to choose a prime minister.

"The country is in a crisis," says Laith Kubba, who was a spokesman for the Iraqi government right after the fall of Saddam Hussein. "The political process has withered and it's about to fail and that's because of bad politics and bad politicians."

Kubba is now an analyst for the National Endowment for Democracy and blames the crisis on weak management by Prime Minister Nouri al-Maliki.

He says the Iraqi government had every reason to succeed. "[It] benefited from the blessing and support of the US and Iran. It benefited from oil revenues in hundreds of billions of dollars."

And he says that while insecurity and the rapid advance of the Islamic militant group ISIS complicates the political situation, it doesn't explain the dysfunctional politics in the country — which is the worse dysfunction he has seen there since the fall of Saddam Hussein.

"The presence of ISIS has made it much clearer why [Prime Minister] Maliki should go. Despite that, he's insisting on staying," says Kubba.

Kubba says the leadership requires change, and quickly. "If it doesn't come peacefully, it will come in radical forms," he warns.