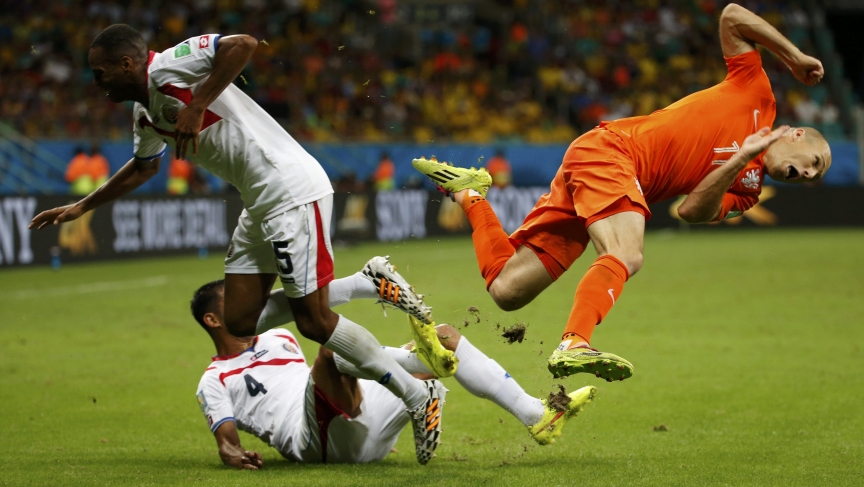 Grass flies as Arjen Robben of the Netherlands (R) falls from a tackle by Costa Rica's Junior Diaz (C) and Michael Umana during their 2014 World Cup quarter-finals at the Fonte Nova arena in Salvador July 5, 2014.
Credit:

(Editor's Note: FIFA's failure to allow the world's elite soccer players to perform on natural grass fields has led to lacerated legs and complaints of second-class treatment. In 2010 and 2014, the men had natural grass shipped in. From where? Canada, host of the 2015 Women's World Cup, where FIFA is making the women play on artificial turf that is as hot as 120 degrees. Here is our 2014 story.)

How did Brazil keep that grass of its World Cup venues looking so great in 2014 with all the abuse it took?

You know what we mean, the sliding tackles and dramatic dives that rip up bits of grass ... and the heavy action in front of the goal during corner kicks, when the grass is getting trampled and mangled.

Well, Terry Scott knows the secret. He's vice-president of Western Canada sales for Pickseed, a grass company in Manitoba, Canada. And Pickseed is an official grass seed supplier for this year's World Cup.

Choosing the proper seed variety for the soccer pitches is the first step, says Scott. The grass used in for the World Cup in Brazil is a perennial ryegrass. That's not Brazil's usual soccer grass.

"[It's] a variety that germinates very quickly in 5-7 days, so it can be overseeded on the soccer pitches that, traditionally in Brazil, are Bermuda grass soccer pitches."

Brazil's typical Bermuda grass goes dormant at this time of the year and turns brown — which wouldn't look very good on television.

But ryegrass, says Scott, is an "aggressive grass, and it's a grass that we can successfully grow with our seed production farmers up here in Manitoba, Canada."

Each of Brazil's 12 World Cup fields were grown from more than a billion perennial ryegrass seeds, says Scott.

"Perennial ryegrass is generally about 300,000 seeds per pound, and you have to put quite a few pounds on a soccer pitch, which is about 90,000 square feet," he says. "So it ends up taking about a billion grass seeds per one soccer pitch."

The ryegrass is grown on 10,000 acres of Manitoba farmland. Scott says it's well suited for hot and humid, as well as cooler, weather, which is important because the soccer stadiums in Brazil are located at different altitudes and climates. "It does manage a variety of conditions depending on the mix that we put on a specific field," he says.

Pickseed also provided its Manitoba ryegrass seeds for the 2010 World Cup in South Africa and the 2012 UEFA European Championship in Ukraine and Poland, not to mention golf courses and baseball fields around the world. Scott says Manitoba's grass farmers are proud of where their grass is being used.

“The Brazil World Cup action has been fantastic so far ... It’s probably because the drama unfolds one penalty shot at time, pitting shooter one-on-one against a goalie, and all the action takes place against a backdrop of deep green grass," he says.

As for his own front yard, Scott uses a mix of Manitoba perennial rye along with Kentucky seed. "My front lawn looks fabulous," Scott says, but won’t take all the credit for his lush yard. "There was a fair amount of rain this spring," he says, "and the turf grasses do like a lot of moisture."