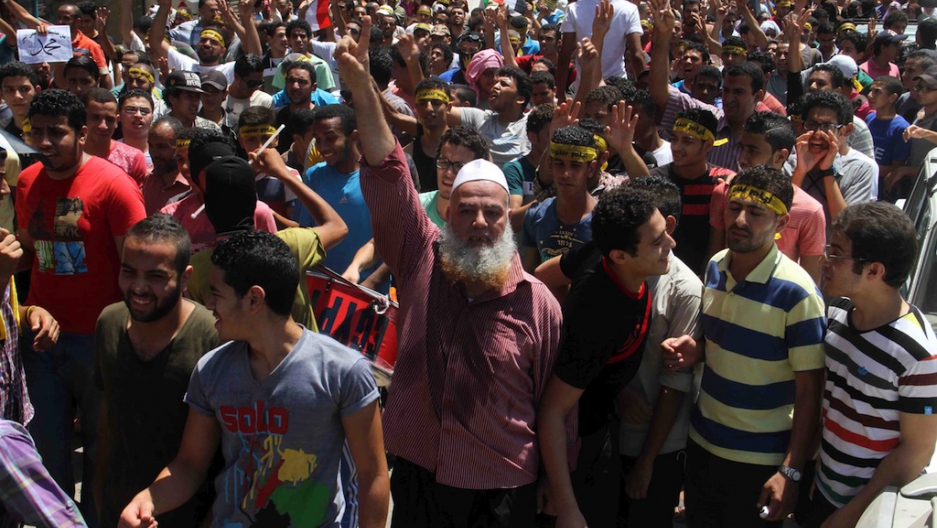 Egyptian supporters of the Muslim Brotherhood movement shout slogans during a rally to mark the first anniversary of the military ouster of president Mohamed Morsi on July 3, 2014 in Cairo, Egypt. Egyptian police swiftly quashed Islamist protests firing tear gas and arresting dozens of demonstrators, as the protests are seen as a test of the Islamists' strength, with the Muslim Brotherhood-led Anti Coup Alliance having issued an aggressive rallying cry demanding a 'day of anger' to mark Morsi's overthrow.
Credit: Khaled Kamel
Share

This is Part Five of a five-part series.

RIYADH, Saudi Arabia — The Saudi government’s March designation of the Muslim Brotherhood as a terrorist group caused many Saudis to wonder if they now risk being seen as criminals because of their longstanding sympathies with the organization.

The Ministry of Interior decree put the Brotherhood— the oldest political Islamist organization in the Muslim world — on a par with such groups as Al Qaeda even though the Brotherhood does not condone violence. Even the slightest display of support for the group, including posting online images and slogans, was outlawed.

“The government is now saying that people who are like you are terrorists?” asked Bassim Alim, a lawyer in Jeddah. While there is no Brotherhood organization in the kingdom, Alim explained, there are many people “with the Muslim Brotherhood lifestyle and outlook on life.”

The Brotherhood’s banning appears to stem from two of Riyadh’s political priorities. First, to show support for Egypt’s military junta, which declared the Brotherhood a terrorist group last December and has been aggressively arresting and prosecuting its members since then, including hundreds of death sentences. Secondly, to quash any ambitions among Brotherhood-influenced Saudi dissidents to demand internal political reforms.

“People know that [the banning] is done for the politicians’ interest,” said Mohammad Al Ojaimi, a businessman and activist in Riyadh. “They’re afraid of the Arab Spring.”

“We are shocked,” said a Saudi who works for the Education Ministry in Riyadh. “We have been raised that [Muslim Brothers] are the best and most honest people. And we are now facing the reality that they are terrorists, according to the government.”

The Brotherhood ban comes as the government is aggressively using broadly-worded anti-terrorism laws to quash activities of human rights and political reform activists. Walid Abu Al Khair, a vocal human rights activist, is the latest example. On July 6, he was sentenced to 15 years in prison and a 15-year ban on foreign travel for, among other things, “showing disrespect for authorities” and “inciting public opinion against the government,” Reuters reported.

The government’s ban on the Brotherhood also illustrates how Saudi politics are often played out in religious terms. In this instance, for the first time in decades, the government is openly challenging an Islamist group.

“I think we have a very big change nowadays, in that the government is getting rid of the Islamic movements,” said Bader Al Ibrahim, a medical doctor and activist. “For the first time in 30 years they are going into maybe a battle with these movements.”

Al Ibrahim said he expected that the government would use the traditional Salafi rhetoric of the state’s official religious establishment against the Brotherhood, noting that it is a discourse that “has always given the government Islamic legitimacy to fight their enemies inside and outside the country.”

Naming the Brotherhood a terrorist group also will have an impact beyond Saudi borders, sharpening the divide in the Salafi movement that has gained prominence in the wake of the Arab Spring. On one side of that divide are Salafi groups that eschew politics, such as the Wahhabi clerics of Saudi Arabia’s religious establishment. On the other are Salafi groups like the Brotherhood that believe seeking political power is justified and necessary to pursue the Islamization of their societies. Groups representing both trends are active in mostly every Middle East country.

In a statement from its London press office, the Brotherhood said it was “surprised” and “distressed” by the Saudi move, which “contradicts entirely with its historical relations with the Muslim Brotherhood.”

The government’s decision flummoxed many Saudis for several reasons. Most notably, the Brotherhood’s roots in the kingdom go back more than half a century when its members were given refuge as they fled persecution in places like Egypt and Syria.

Although the Saudi ban on all political parties meant that it could not openly organize, it developed well-known networks of like-minded individuals. Many in these networks became civil servants and joined educational institutions where they brought in curricula influenced by the Brotherhood ideology.

In the 1990s Islamist dissidents shaped by the Brotherhood’s vision of political Islam and known as Al-Sahwa Al-Islamiyya, or Islamic Awakening, began demanding political reforms. But they never openly challenged the government and backed down after some were jailed.

The government’s tagging of the group as terrorists may now alienate its many sympathizers, generally a well-educated slice of the population. “I think this is a big political mistake,” said Fahad AlFahad, 31, a marketing consultant and human rights activist, noting that Brotherhood sympathizers “have a reasonable weight within society.”

Some observers expressed fears that if the Brotherhood is forced into hibernation, younger disgruntled Saudis may gravitate to more militant Islamist groups.

The decision has certainly created fear. As soon as the decree was issued, Saudis began cleansing their Twitter and Facebook accounts, removing the four-finger image that has come to denote support for the Brotherhood since Egypt’s military removed President Mohamed Morsi in July 2013 and weeks later killed hundreds of his supporters in a crackdown.

Riyadh had welcomed the Egyptian coup and removal of Morsi, whom it blamed for mismanaging Egypt’s economy. As an absolute monarchy it also was glad to see an end to an elected Islamist-led government.

Not all Saudis, however, joined their government in applauding the coup. Morsi’s removal drew widespread condemnation from Saudis on Twitter and in online statements.  “Most people are not happy with what happened in Egypt...especially the Islamist groups and they are not a few people,” said activist Ibrahim. “People who are supporting democracy also are not happy. They are not with the government in welcoming the coup.”

The episode apparently persuaded the Saudi government, which is spending billions to shore up Egypt’s economy, that it had to send a message discouraging Saudis from supporting the Brotherhood.

William McCants, director of the Project on US Relations with the Islamic World at the Brookings Institution, said the Saudi break with the Brotherhood “is a big change in policy….[and] it has a lot to do with the events in Egypt. This is a sort of tsunami that’s come of the earthquake in Egypt and it’s causing a lot of unrest in Saudi Arabia.”

Mohsen Al Awajy, an Islamist activist who was active in the Islamic Awakening, called the Interior Ministry statement “a very illegal decree [that] will put everyone in a silent position.” But he added that he did not think the terrorist label would stay in place a long time. “We believe it will die out like clouds.”

Radwan Masmoudi, President of the Washington-based Center for the Study of Islam and Democracy, agreed. The Saudis are “going to realize this is futile and counterproductive for their own interest and the interest of the region,” he said. “I mean the Muslim Brotherhood represents about 30 to 40 percent of the population...across the Arab world. So what does it mean to declare 30 to 40 percent of the people terrorists?...It’s a very dangerous and illogical step.”

Part Three: The rise of atheism in Saudi Arabia, where talking about atheism is illegal