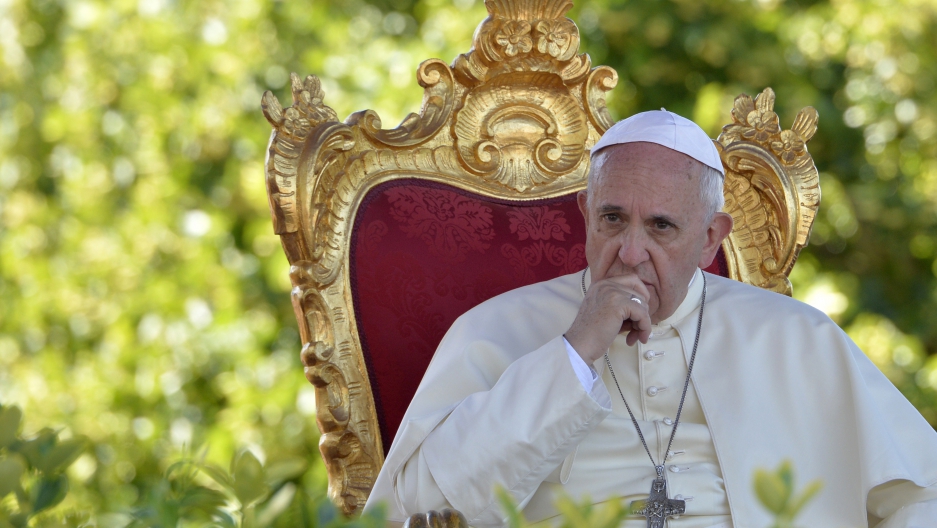 Pope Francis looks on during a meeting with youth of the diocese on July 5, 2014 in Castelpetroso, southern Italy, as part of his one-day visit in the Molise region.
Credit: Andreas Solaro
Share

Pope Francis said the clergy abuse crisis was “camouflaged with a complicity that cannot be explained” Monday in Rome.

He also used some of his most emotional language yet in a Vatican-distributed video of his sermon at a private Mass for six adults victimized by priests as children.

The survivors, two each from Ireland, Germany and the UK, spent the weekend at Santa Marta, the Vatican residential hotel where the pope lives. It typically houses visiting churchmen.

The group had breakfast with the pope, and met individually with him in sessions through the morning.

Francis compared clerical abuse of children to “a sacrilegious cult.”

The pope spoke, too, like a sinner in confession: “I beg your forgiveness, too for the sins of omissions on the part of church leaders who did not respond adequately to reports of abuse made by family members, as well as by abuse victims themselves.”

“Are sins of omissions not also crimes?” Alberto Athié, a prominent advocate for abuse survivors, said in an interview by phone from his home in Mexico City.

“Is this only about local ecclesiastical authorities, when in fact they were and are acting under the provisions of the Holy See?” ruminated Athié, who left the priesthood and a high-profile position with the Mexican bishops’ conference in 1999, protesting the cover-up of a pedophile.

“Or is the sin of omission a crime of cardinals of the Holy See, and even popes John Paul and Benedict?” said Athié, a respected moral voice in Mexico.

The question casts a long shadow over a crisis that has escalated, under three popes now, as highly-charged civil cases, prosecutions and government investigations have undercut the church’s image and moral standing in Western countries, while a more recent movement of protesters has risen in Latin America.

Athié’s remarks captured a consensus voiced by abuse survivors in many countries who are pressing Francis to transcend rhetoric and use the power of his office to forge legal policies as no pope has done. Athié left the priesthood and an influential position with Caritas, the bishops’ missionary organization, in 1999, after a protracted battle with Vatican and Mexico City archdiocesan officials for their support of Father Marcial Maciel, a powerful priest trailed by pedophilia accusations.

Athié posted an open letter July 3 to Francis demanding systemic reforms to punish perpetrators and hold bishops accountable; the manifesto signed by 128 abuse survivors, lawyers and supportive groups was announced at a news conference in Mexico City, where the newspaper La Jornada called the church’s deeds “crimes against humanity.”

The July 3 letter makes a formal demand of Pope Francis that he “dismiss Cardinal Norberto Rivera of Mexico City for his clear participation in the cover-up of [Legion of Christ founder] Marcial Maciel, and Father Nicolás Aguilar and other pederasts.”

Aguilar shuttled between Mexico and Los Angeles, trailed by accusations known to Rivera and Cardinal Roger Mahony of L.A., as a trail of documents in lawsuits have shown. The priest is wanted by police and in hiding in Mexico with extradition warrants for his return to the US on criminal charges.

Reforms in Athié’s letter echo those advocated by SNAP and similar groups in Canada, Australia and Europe: report suspected priests to law enforcement, accelerate the dismissal of predators from the priesthood and halt Vatican tolerance of complicit bishops.

The first pope from Latin America confronts a movement of abuse survivors that is growing in that hemisphere, strikingly so in Argentina, where his record as cardinal-archbishop of Buenos Aires would fall under the “sins of omission” for which he seeks forgiveness.

BishopAccountability, the online archive of abuse documents, in a statement Monday said that the pope, as Buenos Aires Cardinal Jorge Mario Bergoglio "refused to meet with victims, and he stayed largely silent on the issue of clergy sex abuse, except to issue a surprising denial that he had ever handled an abusive priest. His only known action was to commission a behind-the-scenes report to judges that sought exoneration of a criminally convicted priest by impugning the credibility of the priest's victims."

As Athié’s group in Mexico City posted its letter, a group of Argentinians – Sebastián Cuatrommo, Gabriel Ferrini, Osvaldo Ramirez and Julieta Añazco – posted a letter calling on Francis to “amend hazardous defects of ecclesiastical laws so that permissive bishops will no longer remain in office.”

Both the Mexican and Argentinian group seem frustrated that Francis chose to meet with clergy victims from northern Europe. Of her personal struggles, Añazco wrote via email: “I feel cheated, I had faith. I was able to witness the complicity that exists in the church to cases of ecclesiastical abuse. And it hurts, it really hurts.”

Francis’s soul-bearing language, taking on the sins of a hierarchy, has become a lightning rod for the alienated, angry shock troops of a survivors’ movement that has spread across the globe via the internet.

The pope’s charged rhetoric on issues of poverty, immigration and globalization has made him, arguably, the most popular figure on the global stage; yet he has been slow to engage the impact of the church’s criminal sexual underground, a crisis that has collided with the Western court system and press only since the 1980s.

By casting himself in the role of a Father Confessor seeking absolution of his own, Francis has ventured into an arena with victims pushing for a church to be subject to a secular rule of law.

Francis is on an odyssey, trying to demonstrate his capacity to change, using words to fashion an agenda that will find some resolution with a survivors’ movement that wants the church subject to an independent judiciary, not canon law tribunals that cater to the power of cardinals.

Reaction to the pope’s dramatic statement, which survivor groups in many countries had long anticipated, rolled across the media grid.

“There was no standing on ceremony. No pomp,” survivor Marie Kane, 43, who traveled from Dublin, told the Irish Times, of her 20-minute one-on-one with the pope.

“I felt very comfortable, relaxed. He seemed genuinely frustrated at what he was hearing... There was a lot of empathy. There was no looking at watches. I was the one who ended it as I had said all I wanted to say.”

Kane said that she asked the pope to remove Cardinal Seán Brady for his failures in the case of Fr. Brendan Smyth; Brady swore two boys to secrecy a 1975 church investigation. Smyth abused many victims until his arrest in 1994.

Kane told Pope Francis “cover-up is still happening and you have the power to make these changes,” as she told reporter Patsy McGarry, adding that she mentioned other church officials,, but “I didn’t want to go into a litany.”

She said that Francis told her it was “difficult to make these changes...but it’s a big thing with me that Seán Brady is gone.”

Francis said: “All bishops must carry out their pastoral ministry with the utmost care in order to help foster the protection of minors, and they will be held accountable.”

Just how accountability is achieved is crucial to Alberto Athié.

In 1994 Athié began counseling a dying man, Juan Manuel Amenábar, a former president of Anáhuac North, a Legion of Christ university in Mexico City where Father Maciel, the founder of the order appointed him. Amenábar had quit his prestigious job, quit the Legion and the priesthood to live in America. Several years later, a broken man, he lay in a hospital bed, confessing to Father Athié his hatred of Maciel for having sexually abused him when he was young.

In addition to his work with Caritas, the scholarly Athié was vice-president of the Mexican Bishops’ Commission on Reconciliation and Peace in Chiapas, the poverty-ravaged southern state convulsed at the time by an Indian revolt against the Salinas government.

In January 1995, Amenábar signed a formal statement detailing what Maciel had done, entrusting it to José Barba, who was organizing other ex-Legionaries to speak out on how Maciel had sexually plundered them as teenagers in seminaries in Rome and Spain.

Athié worried that Amenábar would die in a state of toxic anger, not peace. The priest encouraged him to forgive Maciel.

Amenábar was weeping, as Athié recalled years later in an interview. “I pardon Father Maciel,” croaked Amenábar, “but at the same time I ask for justice!”
Athié gave him absolution and the Eucharist. He presided at Amenábar’s funeral, and on that day met Barba.

On the advice of the papal nuncio in Mexico City, Athié traveled to Rome in 1999 with a documentary letter on Maciel to Ratzinger, but in several weeks was unable to get a meeting with the cardinal.

Back in Mexico, he entrusted a friend about to leave for Rome, Bishop Carlos Talavera Ramirez of Veracruz state, with the letter for Ratzinger.

Although Talavera never spoke publicly about his meeting with Ratzinger, Athié would speak to several reporters in years to come about his disgust on hearing from the bishop that Ratzinger wondered if it was “prudent” to prosecute Maciel because he had attracted so many young men to the Legion and priestly studies.

Cardinal Rivera of Mexico City, a huge Maciel defender, promptly fired Athié from his positions and ordered him to spend a year in silence for fomenting scandal. Athié ended up quitting the priesthood, and becoming one of the most public allies of sexual abuse victims in Latin America.

“My dream is for Francis to follow the model of Archbishop Desmond Tutu in South Africa,” Athié said, “and establish a Truth and Reconciliation Commission for the victims of the church.”

“But that will not work until we have justice – a church that abides by society’s rule of law.”

--
GlobalPost religion writer Jason Berry was co-producer of the Frontline documentary, “Secrets of the Vatican,” and is the author of Render unto Rome: The Secret Life of Money in the Catholic Church.