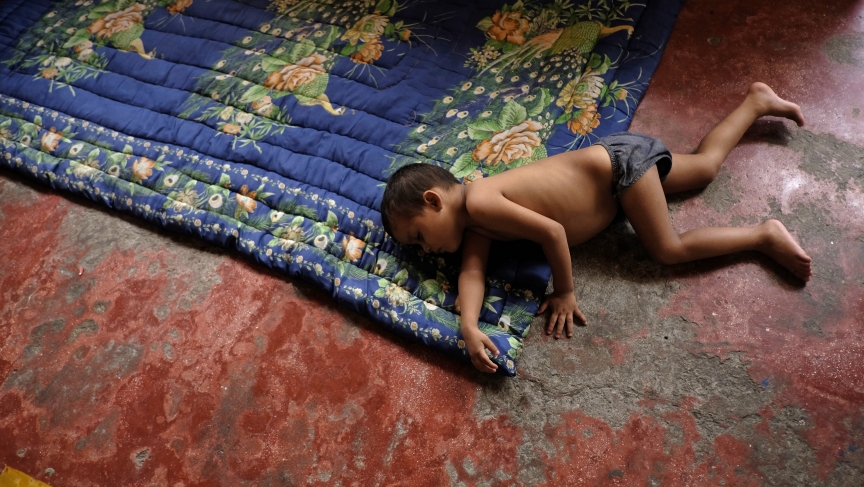 A Honduran child sleeps at an immigrant shelter in Chiapas, in southern Mexico. His is traveling with his family from his impoverished and violent neighborhood to northern Mexico or the US.
Credit:

President Obama is calling it a humanitarian crisis: Tens of thousands of children are traveling north on their own from Central America and being detained at the US-Mexico border.

Tuesday he asked Congress for $3.7 billion in emergency funds to help cope with that surge of new migrants.

The children are leaving their impoverished and crime-ridden neighborhoods to make the dangerous journey through Mexico to the United States. Many of the immigrants are young men between the ages of 18 and 25, said Franc Contreras, a reporter for CCTV (China Central Television-America). There's also been an increase in the number of women, many of whom are single and traveling with infants.

Those groups, says Contreras, are the most vulnerable to violence. On their route, migrants are exposed to muggings, theft, extortion and kidnapping.

"I interviewed a number of women who were traveling alone, and one of them was carrying an infant child who was just a couple of months old," Contreras says. "So there you go. A woman traveling carrying her baby, and compare that to a stronger guy in his mid-20s carrying his backpack. So which one would you go after? Which one is more vulnerable?"

The violence doesn't only happen after the mirgrants leave Central America.

"They’re actually targeted inside their own homes and neighborhoods," Contreras says. He recalls a Honduran couple who were having lunch in their house one afternoon when a couple of gangsters broke down the door, threatened the couple at gunpoint and then stole all their food. "Then they [the criminals] took over the house and told them if they came back, they would be murdered."

"I've heard a lot of stories from people who had this happen to them," Contreras says.

He recently returned from a trip along the Guatemala-Mexico border, where he discovered how easy it was to cross over.

"There are 12 legal crossing points: 10 are along the Guatemalan border and two are between Belize and Mexico. I was on a boat with a number of immigrants coming all over from Central America, mostly Hondurans," Contreras says. "And we came into Mexico straight in, landed the boat on Mexican shores and just walked right into the country without seeing any sort of immigration official, police officials — or anybody from the Mexican government for that matter."

Contreras said Central America is one of the most poverty stricken countries in the world, and a lot of the migrants are "just trying to find food each day."

Guatemalan President Otto Perez Molina and Mexican President Enrique Peña Nieto met in Chiapas on July 7 to come up with a program to protect Central American immigrants crossing into Mexico.