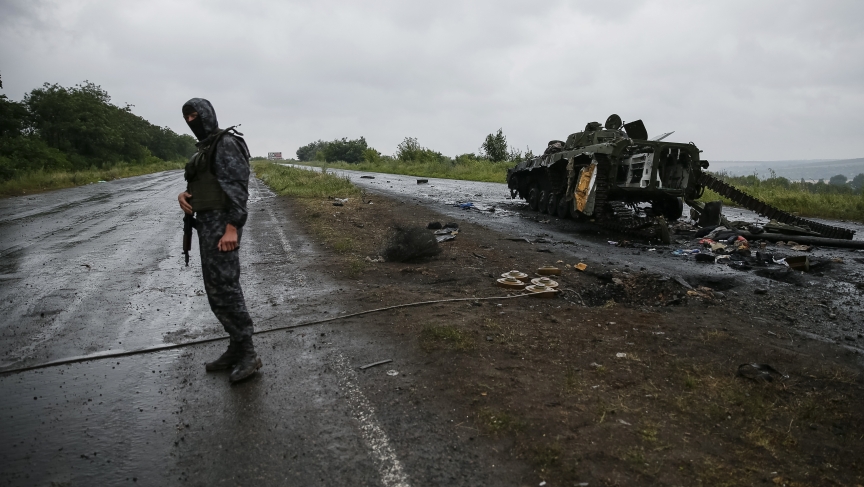 A Ukrainian soldier stands near a destroyed military vehicle of pro-Russian separatists just outside the eastern Ukrainian town of Slaviansk. July 7, 2014.
Credit:

The tide may be turning in the conflict in Ukraine. This weekend, government forces re-took several eastern towns from pro-Russian fighters, including the key rebel stronghold of Sloviansk.

“I think this is a very important turnaround for the Ukrainian Army,” says the BBC’s Olexiy Solohubenko, who just returned from a reporting trip to the battle-torn region.

“What they’ve done this time is not just recapture several cities, including the city of Sloviansk — a very iconic place for the pro-Russian rebels — but also forcing quite a large number of rebels … basically to flee.”

Solohubenko says the Ukrainian military will now likely push on toward two major regional centers: Luhansk and Donetsk. But he believes re-taking Donetsk will be a serious military challenge for the army.

“Sloviansk was a city with a population of 100,000. Donetsk is a million-plus,” says Solohubenko. “It’s a very large place. So when I say ‘militarily’ it is an important turnaround, it’s not the end of the story yet.”

Support for pro-Russian rebels in these major eastern cities is unclear now. The BBC reporter notes that a rally held this weekend in Donetsk attracted several thousand rebel supporters. But, he says, those numbers pale in comparison to the numbers seen at rallies over the few past months.

“The key concern is not so much the possible attack — [Donetsk citizens] don’t believe that there will be a mass strike by Ukrainian forces on the city — but the lawlessness and the lack of security in the city,” says Solohubenko.

Ukrainian military officials are saying that they intend to institute a blockade against the cities of Donetsk and Luhansk until rebel forces lay down their weapons and surrender.

“That means a similar situation to what happened in Sloviansk,” says Solohubenko, “I think they said that the peaceful civilians could leave and they would open the corridors for them." The rebels had the choice to either give up their weapons and surrender or take an earlier proposal from Ukraine President Poroshenko to leave and go to Russia.

Still, for civilians wishing to flee the area, leaving the city might not be so easy, suggests Solohubenko. It’s reportedly been next to impossible to buy rail tickets out of town, and some of the bridges around Donetsk have been destroyed.

When asked whether Ukraine will be unified any time soon, the BBC reporter says he thinks so, with a caveat.

“But I think it will never be the same,” he says. “If you look at the logic of what President Putin wanted to achieve just seven months ago … he wanted to bring Ukraine closer to Russia, to make it a more friendly state, to push it back from going West toward Europe and the United States.

"As the result of the annexation of Crimea and what was going on in eastern Ukraine ... I think the result is the opposite. Ukraine is more patriotic, more nationalistic ... and it’s much more anti-Russian.”