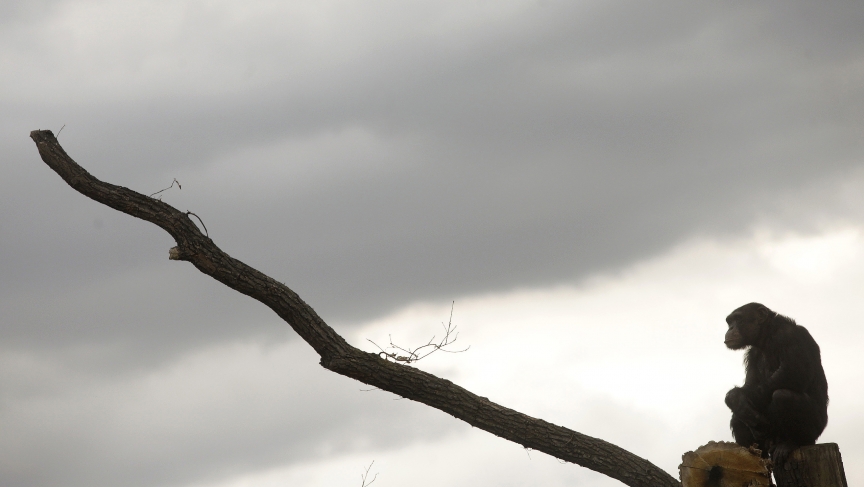 A retired former lab chimpanzee lives at this sanctuary for "traumatized" primates in Austria. Medical research on chimps and other great apes is being phased out around the world, but some researchers say Ebola vaccine experiments in US labs should continue as a way to protect wild chimps and apes from the virulent disease.
Credit:

Here’s a conundrum. As our understanding of the pain and suffering of animals grows, countries around the world have phased out the use of humans’ close cousins — gorillas and chimpanzees — in medical experiments. But that change could actually end up hurting those animals' wild relatives.

Only the US still does research on apes and chimps, and the practice is being phased out here, too. Now, some researchers want to put that phase-out on hold.

They argue that the only way to save wild populations of these animals from an even worse fate is to let medical testing on some captive great apes continue.

That worse fate? Death at the hands of the virulent Ebola virus.

An outbreak of the virus is sweeping through Guinea, Sierra Leone and Liberia in West Africa right now, with the human death toll at 400 and counting. What’s often forgotten is that the virus also can infect the great apes that live in the region and in parts of East Africa.

By one account, Ebola — which has a 90% fatality rate — has killed about a third of the world's gorillas, and thousands of chimps.

That’s why some researchers say primate medical research centers run by the National Institutes of Health (NIH) in the US should be kept open, or some alternative found, to keep research on an Ebola vaccine alive.

The hope, says BBC reporter Victoria Gill, “is that when we're looking at something like the Ebola virus, and actually lots of other diseases that are threatening very endangered primates, we might be able to develop drugs and vaccines that could potentially help save some of these endangered primates from extinction. But they would need to be tested on apes before they could be used in the wild.”

And therein lies the quandary. Medical testing on great apes is being phased out because it’s seen as inhumane. But Gill says one researcher in particular, Dr. Peter Walsh of the University of Cambridge in England, told her that “we need these primate centers, ironically, in order to be able to save some of these wild apes.”

Gill says others are calling for new research centers to be set up to continue research on captive apes.

The NIH research centers were established to test drugs that would eventually be used in humans, specifically a vaccine for HIV, Gill says. “So it's not really their goal to test vaccines for the benefit of apes.”

It’s a complex problem that could take years to resolve, Gill says. And the outcome of the conversation could hinge, in part, on how difficult it would be to eventually administer a vaccine to animals in the wild.

Gill says that could be very difficult with truly wild populations of great apes. However, some animals in parks and reserves are more “habituated” to people. “They’re part of conservation tourism programs … they're used to people being around them. So what Dr. Walsh in Cambridge is saying is that those animals would be easy to reach."

Walsh himself is developing an Ebola vaccine for chimps and gorillas.

Gill says some researchers believe “that we're so far progressed in terms of some of the vaccines … they’re so far along that clinical development path, that it wouldn't cost very much to complete that testing” on lab animals and then get those vaccines into some of the habituated wild animals, even if the truly wild ones could never be reached.

But that may only be able to happen if the rules to protect captive apes from medical testing are eased up, at least for a time.