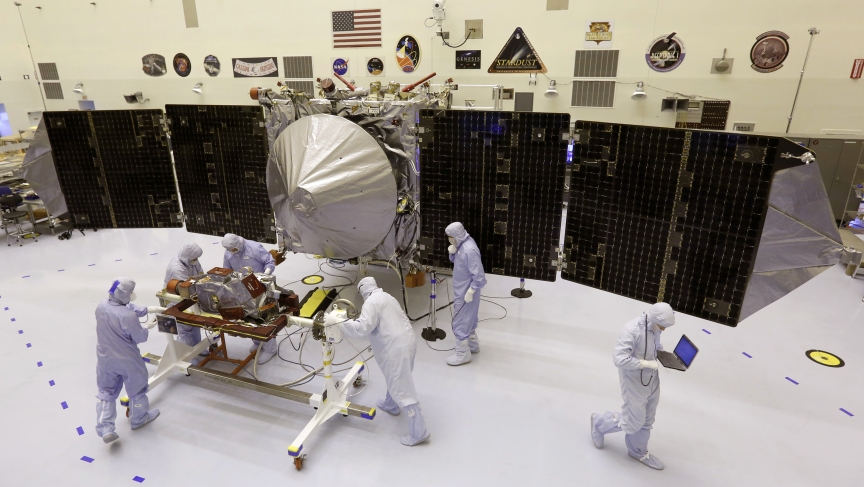 NASA technicians work on a Mars-bound spacecraft. Unmanned missions to Mars have mostly been successful, but the effort to sent a human being there is proving a harder task — and a harder sell.
Credit:

Since the days of Richard Nixon, presidents have pledged to land an American on Mars. But more than 40 years later, we're still doing it wrong.

That's according to a new report from the National Research Council (NRC), which says that NASA's current strategy for landing Americans on Mars simply isn't feasible.

"It doesn't develop some key technologies that are needed to successfully land on, and operate on, the surface of Mars," says Jonathan Lunine, the co-chair of committee that wrote the NRC report.

“What NASA is doing now is what you would call a ‘capabilities-based’ approach,” he explains. “They have these vehicles — Orion, which is kind of a souped-up Apollo vehicle, and the Space Launch System (SLS) — and they have a budget projection. So basically, they've had to say, ‘Well, what are we gonna do with this stuff?’”

Instead, the NRC recommends that NASA follow what it calls the "pathways" approach. Under that plan, NASA would develop a series of "steppingstones" — intermediate destinations that would allow it to develop the technologies needed to get to Mars in “smaller bite-size chunks.”

Congress requested the report in the NASA Authorization Act of 2010, which told the NRC to “examine the rationales for human spaceflight, identify the questions that motivate it, consider public opinion and recommend strategies by which this nation and its international partners might go to some distant place, if the nation decided it wanted to do that.”

But with all of the uncertainty contained in that mandate from Congress, why even pursue a landing on Mars at all? Lunine, who's also the director of the Center for Radiophysics and Space Research at Cornell University, says “if you look at how far humans can really go, that's really the limit — and it is a fascinating place to go at the same time. So there's a convergence there.”

And Bill Nye — known to millions as The Science Guy, but also the executive director of the Planetary Society — says creating a long-term plan that will land a human on Mars makes sense for several reasons.

“First of all, it’s inspiring,” he says. “Our ancestors, who did not have that drive to look up and out, got outcompeted by us. So that drive is deep within us.”

Secondly, he says, we should send people to Mars because humans are better explorers than machines: “What the best rovers do in a week, it is estimated a human could do in a minute."

Finally, Nye says, an ambitious, long-term mission will benefit humankind. Just as with previous manned mission, it would force NASA to create new technologies and solve scientific problems that have never been solved before.

The politicians who approve NASA's funding have to weigh those benefits not only against other budget priorities but also public opinion. While space missions — the successeful ones, anyway — usually garner broad approval, the public's support for boosting NASA's funding is typically much thinner. Nye points out that the wildly successful Curiosity Rover, a robot Mars lander, was funded through the Planetary Science Budget. That budget is currently less than $1.5 billion a year. By comparison, the cost of the Apollo moon landing program was $151 billion in 2010 dollars.

But Nye and Lunine both say that those budget-driven decisions often end up being illogical and counterproductive. For example, the first mission of the Space Launch System is scheduled for 2017. Its next planned launch? Four years later.

If politicians are worried about government spending, Nye says, they should understand that having scientists, engineers and technicians sitting around for four years waiting for the next launch is a good way “to go through a lot of cash.”

But the real problem is not misspent money — it’s lack of funding in the first place. Nye says NASA needs Apollo-level financial commitment if we want it to succeed in its current goals.

Jonathan Lunine says the NRC report is essentially laying out a challenge to those who say the US should put someone on Mars.

“If budgets are cut and you can't do it, don't do it," he says. "Don't pretend you can do it. Don't take [your] capabilities and say, ‘Well, what can we do with that?’ Set a goal and if the nation is committed to doing that, then stay on that path.”