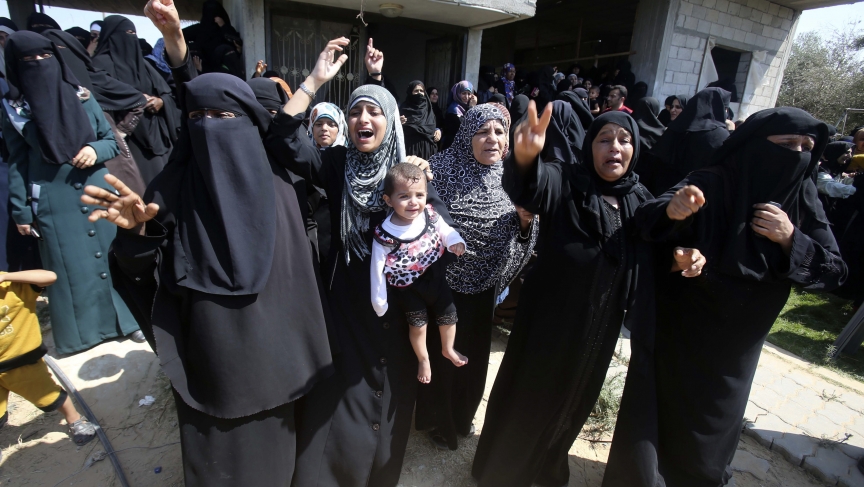 Relatives mourn during the funeral of a Palestinian Hamas militant in the southern Gaza Strip on July 7, 2014. The Israeli military killed at least five Hamas militants in air strikes carried out in the Palestinian enclave.
Credit:

Israel's investigation into the murder of a 16-year-old Palestinian boy yielded six arrests on Monday. Israeli police say all of the suspects have one thing in common: they're members of La Familia, a right-wing group of soccer fanatics who support the popular Israeli team, Beitar Jerusalem.

The abduction and killing of Mohammed Abu Khdair last Wednesday sparked several days of rioting in East Jerusalem, the predominantly Arab area of the city. Abu Khdair had been forced into a car in the Jerusalem neighborhood where he lived with his family. Less than an hour later, the teen was reportedly beaten and burned to death. His body was then dumped in the Jerusalem forest.

Israeli police suspect that Abu Khdair's killing was carried out as an act of revenge for the kidnapping and murder of three Israeli teenagers last month. The kidnapping case had Israelis riveted for two-and-a-half weeks. Then, the bodies of the teens were discovered in a shallow grave outside the city of Hebron in the Israeli-occupied West Bank.

In the wake of that grim discovery, Prime Minister Benjamin Netanyahu warned Israelis not to take the law into their own hands. But that appears to be exactly what happened.

La Familia is notorious for chanting racist slogans during soccer matches. Beitar Jerusalem, the most popular soccer club in Israel, was founded in the 1930s as an adjunct to a hardline Zionist movement. It has long been associated with the Israeli right wing and anti-Arab and anti-Muslim sentiment.

Until last season, Beitar remained the only all-Jewish team in the Israeli league. But when the club signed two Muslim players, fans expressed their disapproval by unfurling a banner that read, “Beitar will be pure forever.” A few days later, suspected members of La Familia trashed and burned their team's corporate headquarters.

“The core group of fans are well-known to the police,” said Sheera Frenkel, a Middle East correspondent for BuzzFeed, in an interview with PRI's The World. “They've acted out in the past.

“One of the police officers that I spoke to yesterday in an off-record briefing said, 'I'm surprised they didn't do this sort of thing before,'” Frenkel said.

Frenkel recently met with members of La Familia and asked them if the tit-for-tat cycle of deadly violence, culminating in the death of Abu Khdair and the arrest of six Jewish Israeli suspects, was pushing them toward a change of heart. “Absolutely not,” was how Frenkel paraphrased their response.

She said they told her, “We hope this is the first of many. These [suspects] represent us and what we think. We're quite proud of their actions. Arabs have killed us for long enough."

For other Israelis, however, the killing of Mohammed Abu Khdair has sparked a round of soul searching.

On Monday, Abu Khdair's father, Hussein, got a call from Prime Minister Netanyahu. “I would like to express my outrage and that of the citizens of Israel over the reprehensible murder of your son," Netanyahu reportedly said during the call, promising to prosecute the killers to the fullest extent of the law.

“The murder of your son is abhorrent and cannot be countenanced by any human being,” the prime minister was quoted as saying.

In the meantime, militants based in the Gaza Strip continued to launch volleys of rockets and mortars toward Israeli towns and cities. The Israeli military has carried out a series of retaliatory air strikes in recent days. The Palestinian militant group Hamas, which controls Gaza, has vowed to take revenge for the deaths of several of its fighters, which the group says were killed by “Zionist aggression.”