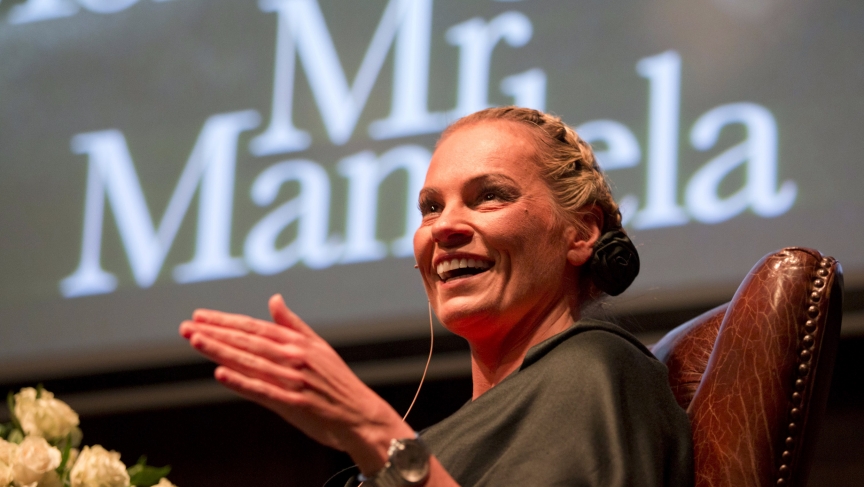 Nelson Mandela's former private assistant Zelda la Grange. Her memoir traces the 43-year-old's upbringing in an Afrikaans family that considered Mandela a terrorist to her improbable appointment to his office when he became president in 1994, and her close relationship with him until his death last year.
Credit:

It’s hard to believe we could hear anything new about Nelson Mandela. But then along comes Zelda la Grange.

"If you were born during the apartheid years and you were white in South Africa, you were born into privilege," she says. "Being a white South African middle class family, we had access to reasonably good education, schooling. We were a very ordinary Afrikaans family with certain rights because of the color of our skin. We loved apartheid, really."

She and her family “lived in a bubble," as she puts it. She knew very little about black South Africa’s struggle against segregation and even less about the man Americans knew as the symbol of that struggle: Nelson Mandela.

"The first time I heard his name was in February 1990 when he was released," La Grange remembers. "I was swimming, my dad came outside to the pool and said, ‘Now we are in trouble,’ and I said, ‘What do you mean?’

"He said, 'The terrorist is being released.’ And I said, ‘What are you talking about?’ He said, 'Nelson Mandela.' We didn’t know much about this man except what our schools and our churches taught us — and that is that this man represents the enemy. He is threatening your superiority."

Several years later, it was time for La Grange to get out of the pool and find a job. Because she was living with her parents, she needed to work close to her family's home. So she tried her luck at the capitol building in Pretoria.

"I applied for a job in the Ministry Without Portfolio and the Presidency," La Grange remembers. "And while I was busy with the interview that day, the President's private secretary ... came into the office and said, 'I need a typist. I need it right now.' And I said, 'Well, I'm available.' And they called me later to say, 'Would you be interested in a position in the President's private office?' and I really couldn't conceptualize what that could mean. I just thought, as long as it's in the Unions building closer to my parents' home, I'll take anything."

She did take it. And her life would never be the same.

Here’s where things get interesting: It was 1994 and South Africa had recently elected its first black president — Nelson Mandela.

"I was walking into his secretary's office ... and as I walked into her office, this group of people came out of her office and I nearly bumped into President Mandela," La Grange says. "And suddenly this man appears in front of you and he extends his hand and I wasn't sure whether I'm supposed to greet him or not. And I extend my hand and I said, 'Good morning, Mr. Mandela.'"

And there were further surprises in store. "He spoke to me and I couldn't understand a word he was saying," La Grange remembers. "I had to ask him, 'Please excuse me, Mr. President, could you repeat that?' because I couldn't figure out why I wasn't understanding him. And when he repeated himself, I realized he was speaking to me in Afrikaans. He was speaking to me in my language, the language of the oppressor, the last thing you'd expect of Nelson Mandela."

La Grange has just written a book, "Good Morning, Mr Mandela," which refers to that first meeting with the South African president in 1994. La Grange would go on to experience much more working for Mandela.

"At that stage [when I first started work,] I was 24 years of age," she says, "Now, he was in prison for 27 years. So I felt like, 'you know what, you don't even know what 27 years feel like and your people sent this man to jail for 27 years.' So you feel guilty, you feel responsible immediately as an Afrikaaner standing there."

After two years as a typist in the president’s office, La Grange was promoted and eventually rose to be the president’s private secretary. She spent 19 years working with Mandela and served as his personal assistant. The two became very close.

That's until Mandela's office was closed down because he wasn't able to work any longer. La Grange recalls the last visit she paid to the frail Mandela at his hospital.

"I said, 'Hello Gulu, this is Aldina [nicknames they used for each other.] I've come to say hello to you.' And his eyes just opened and gave me the brightest, biggest smile. And again, I broke down in tears," she says. "It was just too much for me, but he fixed his eyes on me and [the family at the bedside] joked and they said, 'Madiba doesn't afford other people that kind of smile but you, he smiles.' So they teased me. But because that's the most recent memory of him, that's very vivid in my mind."

Zelda la Grange — Aldina, as she was known to Nelson Mandela — told her story to our colleagues at the BBC's Outlook Program.