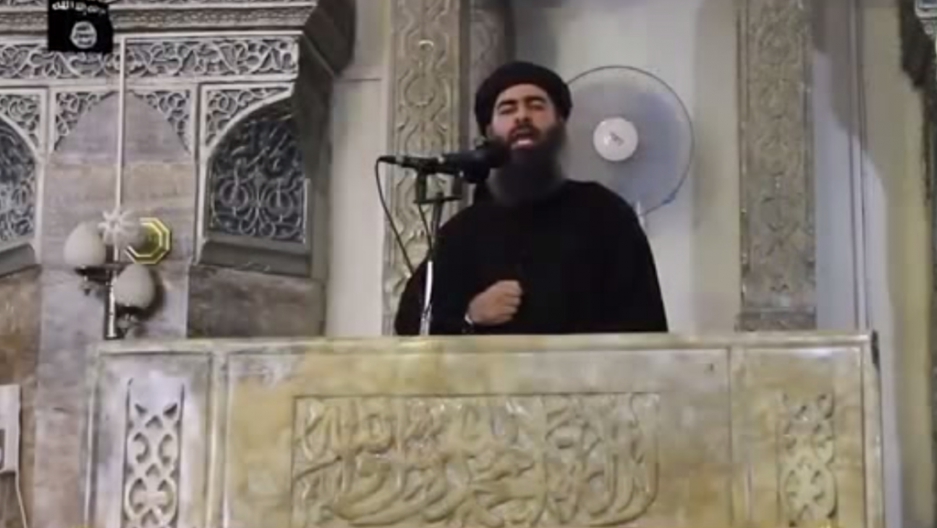 A screengrab from an earlier video appearance by Baghdadi.
Share

Editor's Note: This article has been updated since it was first published.

In the past few days, the situation has gotten bad enough that US President Barack Obama has decided to launch airstrikes. Considering the history of the US in Iraq, that decision says a great deal about conditions there.

The Islamic State has pushed north into Kurdistan and is threatening to exterminate an entire religious-ethnic group, the Yezidis, whom some Sunni Muslims consider "devil worshippers." Thousands of Yazidis have fled to the mountains, where they are dying from dehydration and exposure. Along with airstrikes, the US is dropping food and water.

So who's running this show? That would be Abu Bakr al-Baghdadi.

In a business dominated by charismatic, propaganda-loving, AK-47-toting figureheads like Osama bin Laden and Abu Musab al-Zarqawi, Abu Bakr al-Baghdadi is an unusual leader — a recluse who has maintained operational control of the Islamic State despite some of his deputies having never met him in person. He's a man without a past, it seems. Without a face, even.

So who is Abu Bakr al-Baghdadi? Here's everything we know so far.

We know that we don't know much If there's one thing to know for sure about Baghdadi, it's that we don't know much about him. Most facts about his life are unconfirmed or disputed. The basics come from an official biography disseminated on jihadist websites and social media.

He's managed to keep a very low profile despite leading Al Qaeda in Iraq since 2010. As one counterterrorism officer told Al-Monitor, "Baghdadi was keen to keep his movements very limited. He limited his contacts to a few members who know him directly. Many of the [released] detainees who are members of the organization, some of them in the leadership, have either never met Baghdadi or met him while he was wearing a face cover.” He was born Ibrahim Awwad Ibrahim Ali al-Badri al-Samarrai in Samarra, Iraq in 1971, according to Interpol. He's also gone by "Abu Dua." Baghdadi earned a master’s degree and a PhD in Islamic studies from a Baghdad university sometime around the year 2000. He lived for more than a decade in a room attached to a small mosque in a neighborhood of the capital city. He was still focused on scholarship when the United States invaded Iraq in March 2003.

There are only two known photos of him Both photos are low-resolution. This one came from the Iraq Interior Ministry. The second is below.

You can get $10 million if you help find him Do you know where Baghdadi is? Congrats, you're rich.

Since October 2011, Baghdadi has been a “Specially Designated Global Terrorist,” and the US State Department is offering a $10-million reward for information that helps lead to his capture or killing. The only terrorist worth more than Baghdadi is Ayman al-Zawahiri, the global leader of Al Qaeda. He fetches $25 million.

Above is the State Department's most-wanted poster for Baghdadi. Baghdadi took over the leadership of Al Qaeda in Iraq, also called The Islamic State of Iraq, in May 2010 after the death of its previous leaders, Abu Omar al-Baghdadi and Abu Ayyub al-Masri.

Al Qaeda in Iraq was in decline at the time, but under Baghdadi, the group grew from a local Al Qaeda affiliate into a regional force dedicated to establishing a Sunni caliphate in Iraq and Syria. That meant defying Al Qaeda chief, Ayman al-Zawahiri, challenging Syrian jihadist group, Jabhat al-Nusra, and taking full advantage of the chaos and militant-attracting environment of the Syrian civil war.

As of mid-June, ISIL had $2 billion in the bank. Not a bad turn-around.

The US once had him detained, but reports conflict about when and for how long Baghdadi spent time in a US detention at Camp Bucca near the Kuwait-Iraq border. Reports conflict about when and for how long he was there. The Daily Beast reported that Baghdadi had spent four years in Bucca before being released in 2009. Based on that story, Slate and NBC have said the same thing.

That information was based on the recollections of Col. Kenneth King, the commanding US officer of the facility while Baghdadi was there. King was surprised to learn that the quiet detainee he remembered was now leading ISIL. “I’m not surprised that it was someone who spent time in Bucca, but I’m a little surprised it was him,” he said. “He was a bad dude, but he wasn’t the worst of the worst.”

One problem: the Pentagon says Baghdadi wasn't at Bucca then.

In a statement about Baghdadi's detention, the Defense Department said this:

"Ibrahim Awad Ibrahim Al Badry, also known as ‘Abu Bakr al-Baghdadi’ was held as a ‘civilian internee’ by U.S. Forces-Iraq from early February 2004 until early December 2004, when he was released. He was held at Camp Bucca. A Combined Review and Release Board recommended ‘unconditional release’ of this detainee and he was released from U.S. custody shortly thereafter. We have no record of him being held at any other time."

When ABC News told King that a “US official” had disputed his story, King said, "I could be mistaken. But I’m 99 percent. He’s a dead ringer for the guy I had the run-in with … His face is very familiar."

So who knows. Either way, the US had him at some point and let him go. On June 29, a spokesman for ISIL announced that the group would now be known as the “Islamic State.” He also declared that "Islamic State" a caliphate and named Baghdadi its ruler. Abu Bakr al-Baghdadi thus became "Caliph Ibrahim." The title "Caliph" makes him a direct successor to the Prophet Muhammad.

He made his video debut on July 5 (maybe) This video of a man claiming to be “Calif Ibrahim, emir of the faithful in the Islamic State” appeared on social media and jihadist websites this Saturday. He spoke at the grand mosque in Mosul.

"God has granted your brothers, the Mujahideen, victory and a conquest after years of patience and holy struggle, and enabled them to achieve their objective," Baghdadi said.

“And they have rushed to declare an Islamic caliphate and to appoint an imam [leader], which is a duty for Muslims, a duty that had been lost for centuries that had been absent from reality, making many Muslims ignorant of it ... I have been afflicted by this great affair, I have been afflicted by this trust, a heavy trust ... I was appointed in charge of you, though I am not the best or better than you, so if you see me in the right, then help me, and if you see me in the wrong, advise me and put me right."

You can read an English translation of the speech here. Meanwhile, the Iraqi Interior Ministry claims the video is a fake.