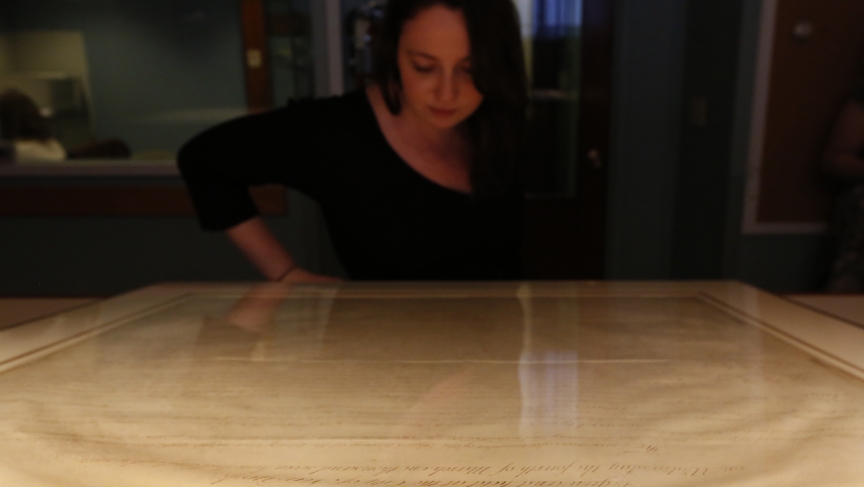 A copy of the Declaration of Independence written by Thomas Jefferson on display at the New York Public Library in 2013.
Credit:

In between tending their grills and grabbing a good viewing spot for the fireworks, many Americans take the time around the July 4th holiday to re-read their nation's founding document. But here's a shocker: There might be a punctuation mistake in the Declaration of Independence.

There's actually more than one version of the Declaration. A few decades after it was first signed, the original version started to fade, according to Danielle Allen, a professor at the Institute for Advanced Study in Princeton, New Jersey.

Allen's research suggests that when copies were being made for the sake of preservation, a period was mistakenly inserted into the vital second sentence. The period falls after the words “life, liberty and the pursuit of happiness.”

Getting rid of the period isn't about amending the Declaration of Independence, Allen said in an interview with The World: “It's merely a matter of correcting an error in the transcription."

The problematic period shows up in a critical part of the document, what Allen calls “the most important expression of American ideals that's ever been written."

“When you put a period in after 'pursuit of happiness,' it's as if the self-evident truths are only points being made about individual rights.”

Allen says the whole sentence is quite a mouthful, but she encourages people to go back and re-read it in its full splendor as a single overarching thought. “It moves from 'me' to 'we', from our individual rights to what we need to do together,” she said.

The emphasis in meaning has significance beyond America's borders, Allen said. “The idea of human equality and the fact that we build governments to protect human equality is [something] that the folks who wrote the Declaration thought belonged to all human beings everywhere.”

Here's that full second sentence, with the period in question included.

We hold these truths to be self-evident, that all men are created equal, that they are endowed by their Creator with certain unalienable Rights, that among these are Life, Liberty and the pursuit of Happiness.--That to secure these rights, Governments are instituted among Men, deriving their just powers from the consent of the governed, --That whenever any Form of Government becomes destructive of these ends, it is the Right of the People to alter or to abolish it, and to institute new Government, laying its foundation on such principles and organizing its powers in such form, as to them shall seem most likely to effect their Safety and Happiness.