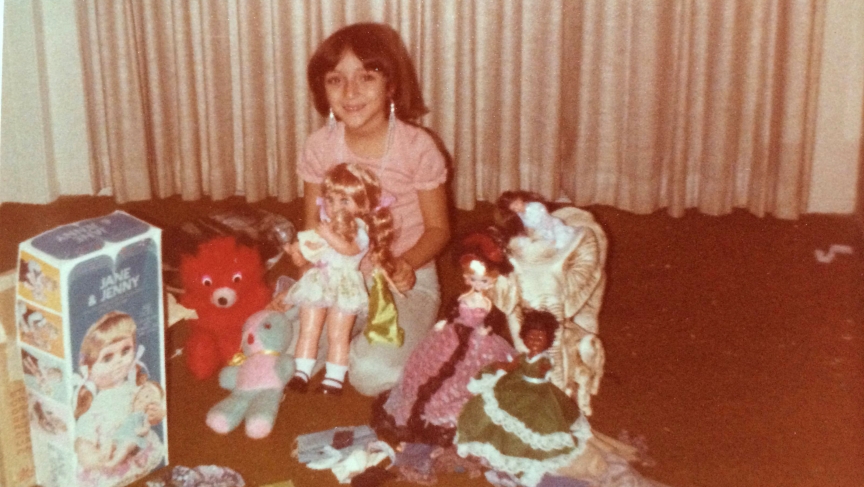 Eight-year-old Susan Cruz enjoying her first Christmas in the United States in 1978.
Credit:

We're hearing a lot of divisive debates these days about immigration, especially given the influx of unaccompanied kids streaming across the US-Mexico border.

But this is not the first time the US has seen a wave of Central American migrants running from violence. Susan Cruz was just eight years old when she and her mother left El Salvador for the US.

It was 1978 and the first rumblings of El Salvador's civil war had begun. Cruz's mother had been working with a fledgling rebel movement. Salvadoran authorities arrested her and expelled her from the country. She and her young daughter made their way to Los Angeles.

"When we arrived in Los Angeles, we literally just had one piece of luggage each, my mother and I. And we landed and all I remember was looking at my mother's face for a sense of understanding of what was going. I remember my mother having a very distraught look on her face and it felt like something very unexpected was about to come. And naturally that made me anxious as well not knowing what was going to happen next.

Even though I had grown up in El Salvador, looking at the newspapers that arrived in our home every day that would be full-blown color photographs of dead bodies, there would be pictures inside the newspapers where someone's head would be placed on top of a stick on the side of the road. While it did seem scary, it just seemed that's just the way things were.

I remember that even before we arrived, that the big thing in the movies was 'Saturday Night Fever.'

So I remember those songs very well. And it's interesting when you think of a song like 'Staying Alive' by the Bee Gees that came out in 'Saturday Night Fever.' Really, we left our country to stay alive.

I think in the very beginning my mom and I held to each other as best as we could considering my mother had been tortured while she had been detained and I didn't understand her emotional distancing sometimes. There was a time where I often wondered what I could do to make it better: whenever she would cry at night, or if she received news from El Salvador, and it was about the death of a family member. A lot of our family was killed during the war, and I didn't understand things like survivor's guilt and how my mother was probably feeling that. So I think in the beginning as a child I tried really hard to stick as close by and just have my presence there, and also because I needed her. I was a child. I depended on her I had nobody else.

I think the most important thing as a child was not being able to understand the language. There was this one incident where we were playing Four Square, and I had never played Four Square. And so all these kids are yelling at me and pointing at me to stand in the square. So I stand in the square, they pass me the ball and I hold on to the ball. I don't know what I'm supposed to do with it.

The kids are yelling at me. I don't understand them. And this girl just comes up and punches me right in the nose. And as I see blood now in my hand coming out of my nose, I react and I fight back. The two of us get sent to the principal's office and I cannot explain to the principal who doesn't speak Spanish, and I can't speak English.

I was suspended and sent home and, of course, got punished by my mom the way that kids get punished in El Salvador, which is with the belt. And so I quickly realized, 'Wow, I really need to learn English quickly otherwise this is just going to be a problem that I'm going to face every day.'

One of our very few recreational activities that we did have, we would go to this movie theater on Vermont Avenue in Santa Monica, right across the street from Los Angeles City College. It's an old movie theater called the Campus Theater. And they would show movies for a very low cost. Particularly the matinees. But it was interesting because they would also show Mexican movies.

And for me that was something that was like an oasis in the middle of all this culture clash and feeling of isolation. We would go to the Campus Theater and we would see these Mexican movies with Pedro Infante. And they were in Spanish so I could understand. Albeit some of them were very inappropriate in my opinion now for children, but the fact that they spoke Spanish and I could identify with that made me realize that I wasn't all alone.

Also at that time, 'Grease' had just come out. And in my attempt to try to cheer up my mother, I convinced her to dress up like Olivia Newton-John and I would try to mimic the last song that they play in the movie.

And my mother's older sister, she was dating this man who had a brother living in Los Angeles. When the brother met my mother he was very impressed by her and he would go look for her try to ask her out. He even bought me a skateboard it was my first skateboard I think he was trying really hard to impress my mother. But my mother was someplace else emotionally and psychologically.

And as crazy as it sounds I remember seeing the movie 'Grease' and, in my eight-year-old self, I thought I was going to play matchmaker. I was trying to get my mom to dress up like Olivia Newton-John and she complied to some degree. She wore the black blouse and the black pants and she tried to do her hair and some makeup, and I thought that would make her feel better that it would also help her to try and connect with other people and that perhaps what I couldn't do to help her perhaps somebody could.

By the way, it did work to some degree, because she ended up marrying him and they ended up having a child, my younger brother."

Susan Cruz is a forensic social worker who has testified as an expert witness in cases involving undocumented minors.

Global Nation, inspired by the South Asian American Digital Archive's First Days Project, is looking for your stories about your first days in the United States — or those of your parents or grandparents. Share by commenting here, using the hashtag #firstdays on Twitter. And scroll though all the stories that have been told so far.