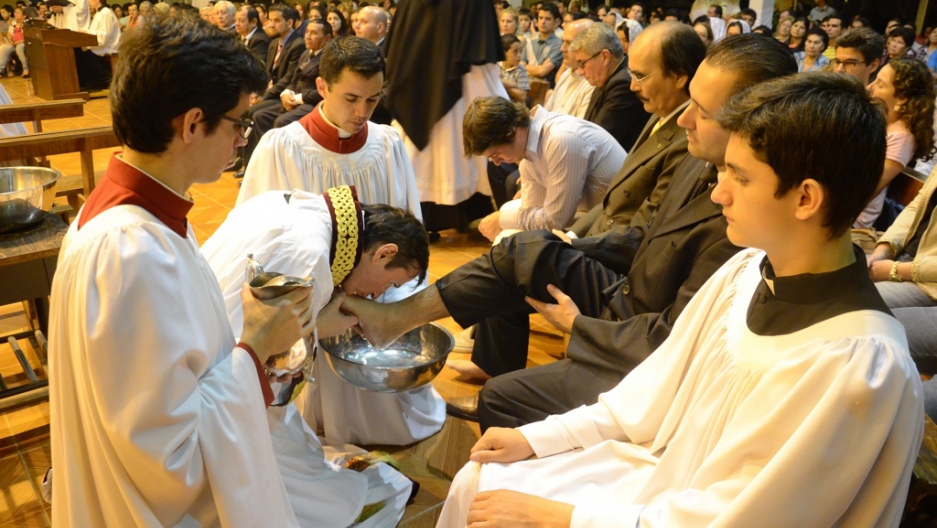 BOULDER, Colorado — Pope Francis will send a delegation this month to a city in Paraguay that’s been rocked by a priest scandal detailed in a recent GlobalPost investigative story.

The news of the trip comes two weeks after Paraguay’s chief prosecutor for youth launched an investigation into Carlos Urrutigoity, the problem priest featured in this site’s article.

Urrutigoity, who was accused of molesting young men in Pennsylvania in the early 2000s, has risen to a position of significant power since moving to the eastern Paraguayan city of Ciudad del Este.

GlobalPost’s ground reporting there last month unleashed a flood of controversy over the priest’s continued work at the Paraguayan diocese and led local activists to call for Urrutigoity’s suspension.

He has denied ever molesting anyone. He said in a face-to-face interview with GlobalPost that he is a victim of a smear campaign.

Still, the purpose of the July 21 to 26 papal envoys' visit is not immediately clear.

A Vatican diplomat in Paraguay announced the visit during a news conference Wednesday in the South American country’s capital of Asuncion, local media reported. News reports quoted him as saying it would be “a pastoral visit to find out some things.”

Paraguay’s Ultima Hora newspaper described one of the envoys being sent to Paraguay, Cardinal Santos Abril y Castello, as a “strong man of the Vatican.” It said the other will be Bishop Milton Troccoli, the auxiliary bishop of Montevideo, Uruguay.

Paraguay’s Catholic Church has been in quite a tizzy since the revelations against Urrutigoity.

Cuquejo has said that a new investigation should be opened into Urrutigoity in Paraguay. That incensed Livieres Plano, who shot back at the archbishop, accusing him of being gay and “a bad person,” while virulently defending Urrutigoity.

Things haven’t calmed down much since then.

ABC Color, the country’s largest media group, has published more than 20 stories since GlobalPost’s investigation broke on June 3, and the feud between the country’s top two bishops has been front-page news in Paraguay for weeks.

In its latest story, ABC Color quoted Livieres Plano as saying the papal dignitaries’ visit was a “coincidence” and was unrelated to the recent scandal. Livieres Plano told the outlet he’d requested a visit from the Vatican two years ago.

At the news conference Wednesday, local reporters asked a Vatican diplomat if the papal envoys’ visit was related to the Urrutigoity scandal. Eliseo Arioti, the diplomat who made the announcement, said the visit is “to find out not only what has happened lately, but also to see what’s going on in the house of Ciudad del Este.”

On June 10, Paraguay’s chief public prosecutor for children and adolescents, Maria Graciela, told ABC Color that her office was launching an investigation into whether there are victims of Priest Urrutigoity in Paraguay.

The US-based Survivors Network of those Abused by Priests or SNAP has reacted positively to the news of the delegation’s visit to Ciudad del Este.

“Had everyone stayed silent, this wouldn’t be happening,” SNAP director David Clohessy told GlobalPost by phone Thursday. “This is more proof that only when victims, witnesses, whistleblowers and journalists expose wrongdoing, only then do church officials take action.”

Urrutigoity has a long history of accusations of molesting young men.

The priest, who is Argentine, was asked to leave a seminary in Argentina in the late ’90s, but was given a “second chance” at a seminary in Winona, Minnesota, according to a 1999 letter by Urrutigoity’s superior at the time.

In Minnesota, Urrutigoity was again accused of making unwanted sexual advances toward a young seminarian, according to the 1999 letter. The Argentine priest then moved on to the Diocese of Scranton, Pennsylvania.

In 2002, he was named in a civil lawsuit, along with another priest. The two men were accused of molesting young men and creating a cult-like atmosphere at a boys’ school in Pennsylvania. The lawsuit was settled in 2004 for more than $450,000.

Urrutigoity, who was never criminally charged, left the United States and reappeared in Paraguay in 2008. After a brief controversy, he rose to become the second in command of the Diocese of Ciudad del Este.

Local activists there have been repeatedly calling on the Vatican to investigate the diocese, which one former church volunteer described as “a refuge for delinquents.”