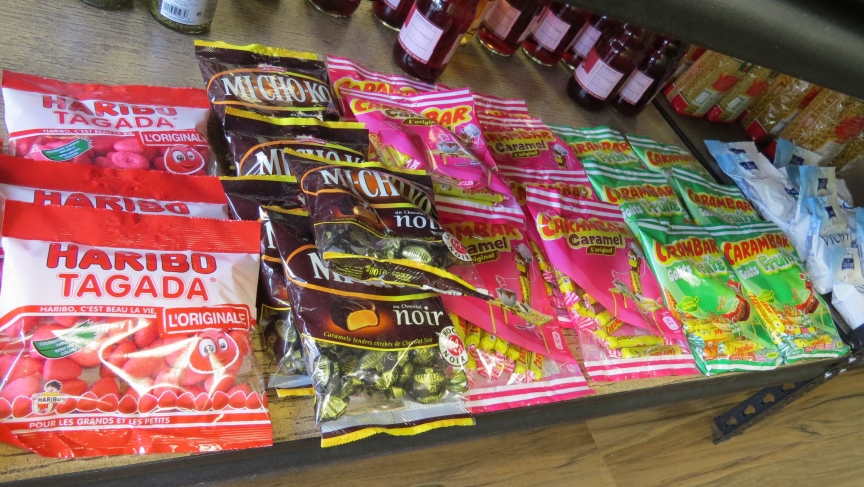 A few weeks ago, I received an email with a puzzling subject line.

And, it listed all kinds of fresh sausages for sale.

But that was no twisted joke, this email was in fact announcing the arrival of fresh sausages at one of my new favorite spots in the Boston area. 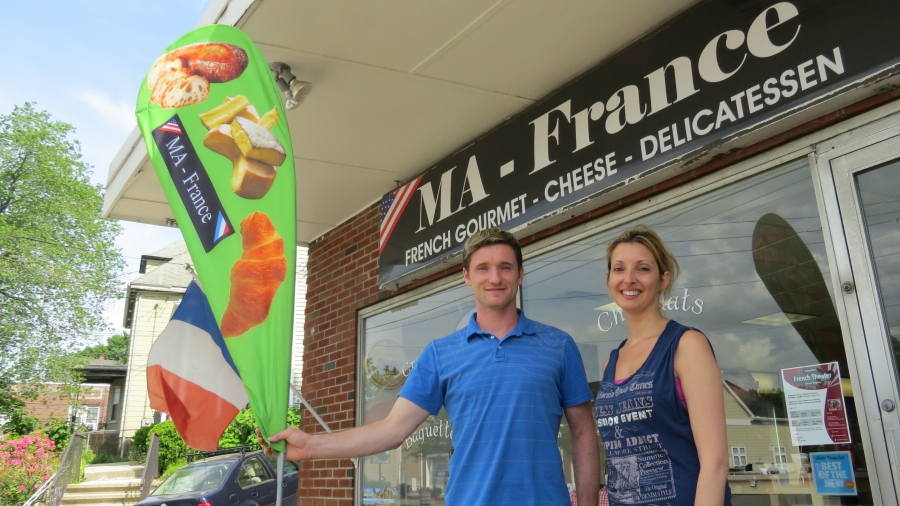 It’s a little French gourmet shop that’s been getting a lot of attention from both American and French customers. It’s called MA France, “MA” as in “my” France but also short for Massachusetts. It sells gourmet delicacies but it also offers something for French expats who yearn for everyday foods from home.

I visited the MA France store in Lexington, a suburb of Boston, on several occasions recently. And yes, I did add my name to the mailing list that keeps me up-to-date on the arrival of new items in the store. Like sausages, or cheeses, or preserves.

MA France is run by a young French couple, François and Cécile Attard, who are from the Périgord region, East of Bordeaux.

When they opened their shop last year, they hardly spoke any English. And they’re still working on that, though they do know how to greet customers warmly.

When François Attard heard from friends in the Boston area that they had a hard time finding good quality European foods there, that got him thinking, and he saw a business opportunity.

It took him two years to persuade his wife Cécile to sell her hair salon in Périgueux. You see, François was eager for a career change. 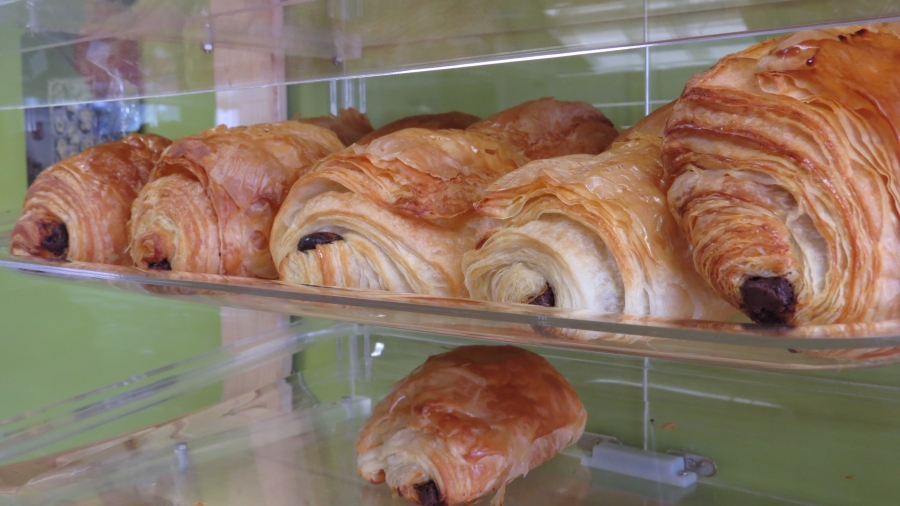 “I was a policeman,” he said. “I worked for five years in the secret service on motorbike.”

The former policeman and former beauty salon manager grew up on nice local foods from their region. From Périgord, the couple now sells duck liver pâté and goat cheeses.

Then of course there are the sausages delivered monthly, and fine pastries like silky chocolate, vanilla, and coffee éclairs, colorful macaroons, creamy Napoléons and chocolate-raspberry fondants.

The pastries are made by a retired chef, and the breads are delivered by a bakery from Cape Cod nearby. Fresh products, especially the croissants and fresh sausages, sell out quickly, so the Attards encourage customers to reserve them ahead of time. (That’s where the need for a mailing list comes in.)

But cheese may be the biggest draw here. There’s Époisse, a creamy strong-smelling cheese doused and ripened with Cognac; also, Bethmale, a goat’s milk cheese, and sheep’s milk Camembert.

Customer Eric Oldsman visited the shop to taste some of the new arrivals. He went for a semi-soft cheese from the Basque country.

“This is a fantastic addition to the community,” he said referring to the shop, “because it’s very hard to get good cheeses and they have a fantastic collection. I come here perhaps once every two weeks for the cheeses and also some of the meat. And the breads are also are very good,” he added.

I come from Burgundy in France, a region rich with wines and cheeses, so when I first walked into the shop, I wasn’t surprised to find those gourmet items. But then I noticed some things that you usually can’t find on this side of the Atlantic, the kind that spurred instant flashbacks: French junk food. 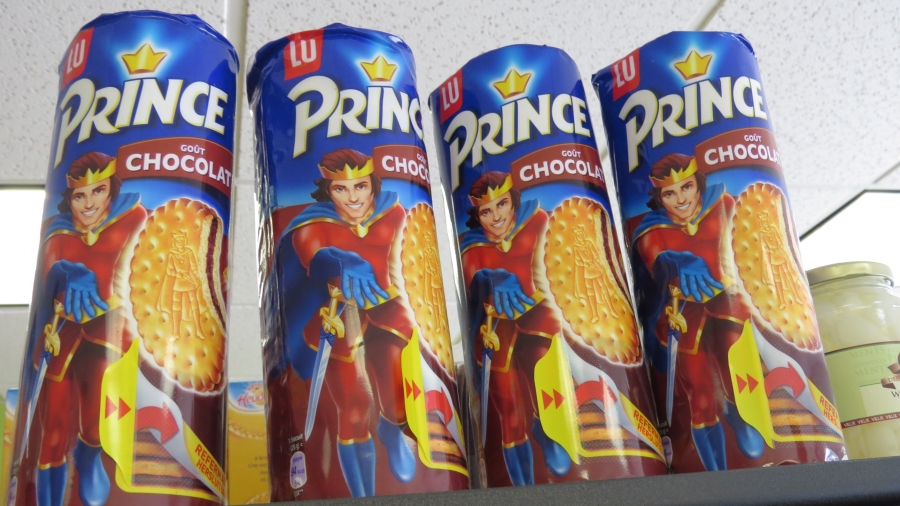 Packages of classic chocolate-covered cookies, jelly cookies, neon-red strawberry marshmallow candy, a peanut-flavored puffed snack, Carambars, the French version of tootsie rolls, and a chocolate breakfast cereal. That may be bad for your health, but it’s good for my French expat soul.

Shop co-owner Cécile Attard says they did a little crowd-sourcing to figure out what customers wanted.

“We began with cheeses,” said Cécile. “And then we developed the grocery store section with the help of a notebook where customers could write down what they’d like to see here, and what they were bringing back from France in their suitcases.”

Many would bring back cookies, teas, preserves and things like cake-mixes and baking powder, soups, even croutons, which are now sold at this store. And it’s clear the goods here are a reflection of what a whole generation of French people grew up with.

Catherine Chaulet is a regular. She says walking into the shop transported her.

“It was lovely,” she said. “It was like a little bit of home right here in Lexington, which I like.”

”The Chamonix Orange, this is something that I used to love when I was a child … soft orange jelly. They’re delicious,” she said.

And like many fans of the store, she is good at spreading the word. “As a matter of fact, yesterday I introduced this whole store to my Zumba friends at Gold’s Gym, so I’m sure they’re all coming now,” she said laughing.

But the store is not just for French people reminiscing about their childhood. Dan McGrath, a nostalgic American, lives a block away from the store. 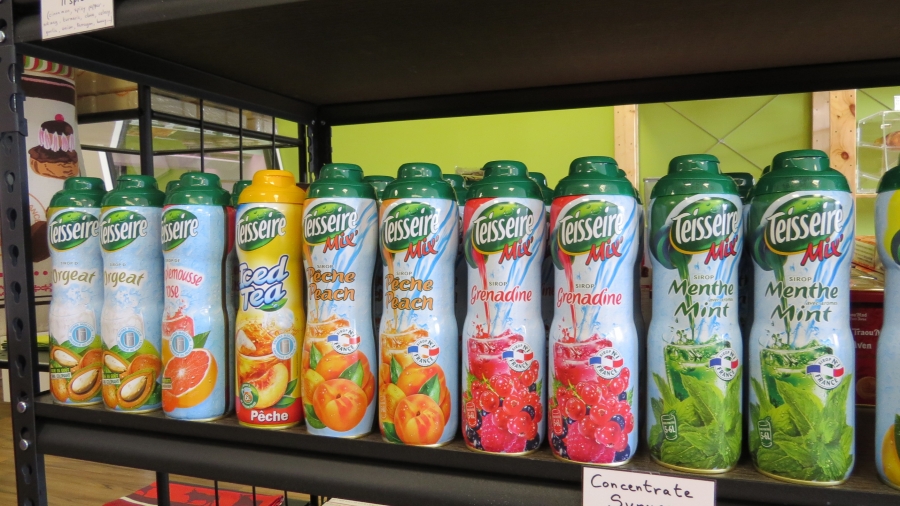 Mint and fruit syrups for mixing with water.
Credit:

He shops there for baguettes and pastries and so much more, like “things I remember from my days going back and forth to France, wandering into the markets and picking up bread, picking up cheese, picking up sausage,” he said, “and going hiking into the mountains. So this brings back memories of that.”

As for me, I was thrilled to find tins of mint or fruit syrups that you mix with water. This syrup used to be a staple of my afternoon snack, as a child.

One sip of the mint syrup evokes powerful memories of summers in France. One tall glass of it with ice cubes serves as liquid air-conditioning on a hot day.

I’ve been known to bring back those heavy tins in my luggage. And the good news is, I don’t have to do that anymore.