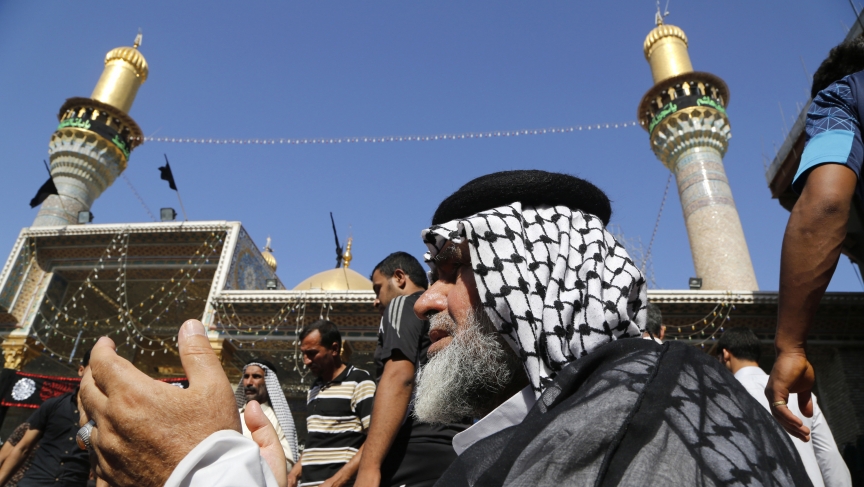 A Shiite pilgrim mourns at the Imam Moussa al-Kadhim shrine to mark his death anniversary in Baghdad's Kadhimiya district, May 25, 2014.
Credit:

It's July 4th, a holiday where we celebrate independence and the power of democracy.

That's something the US hoped would happen in Iraq after it invaded and toppled the dictator, Saddam Hussein.

And many Iraqis had hopes that after all they went through, they would end up with a stable, democratic nation. Right now, though, this seems far off.

The militant Sunni group ISIS or The Islamic State, as it now wants to be known, has been steamrolling across large parts of Iraq and killing people in its path.

For David Patel, formerly at Cornell University and now a research fellow at the Crown Center for Middle Eastern Studies at Brandeis University, what's happening there didn't really come as a surprise.

He says over the past few years with events such as the Arab Spring, Americans had tuned out of what's happening in Iraq.

But for people like him who focus on the Middle East and Iraq, things had been getting very bad for a long time.

"Since 2009-2010, there's been a steady decline in security in many places in Iraq and violence was off the charts for the past year," he says.

On this 4th of July, Patel says, he finds himself thinking about one specific Iraqi friend caught in the battle. He received a Master's degree in Archeology from Stony Brook University and lately was teaching pre-history at Mosul University.

"He was Iraq's first pre-historian," Patel says. But after ISIS took over Mosul, he had to flee his hometown and move to the north.

"He, his wife and his two daughters are in Iraqi Kurdistan and he's stuck there. He doesn't know anyone there and can't return home," Patel says.

It's not clear what will happen to Patel's friend and his family and not only in the immediate future, but also in the years to come.

Meanwhile, Patel has been researching and writing about holy Shiite shrines in Iraq for years and he says as ISIS captures territory across the country, any attack on these sites could trigger a major regional tension.

"One site that's most threatened at this moment is Samarra. It's up north and between Tikrit and Baghdad. So it's really on the front lines of this ISIS-Iraqi government confrontation," he says.

According to Patel ISIS has previously stated that one of their goals is to attack these sites.

"They achieved that goal in February 2006 when they attacked the shrine in Samarra," he adds.

The threat to attack these sites have recently prompted Shiite leaders to emphasize how important they are to Shiites.

Hassan Nasrallah, spiritual leader of Hezbollah, said recently that his group is "ready to sacrifice martyrs" to defend these sites.

Iran's president, Hasan Rouhani has also said that his country will defend these sites.

With all the tension that exists today in Iraq, Patel says it's hard to know what the future of Iraq will look like.

"The entire political order in the Middle East in many ways is being challenged by what's going on right now," he says.

Patel believes this crisis will go on at least for another decade.