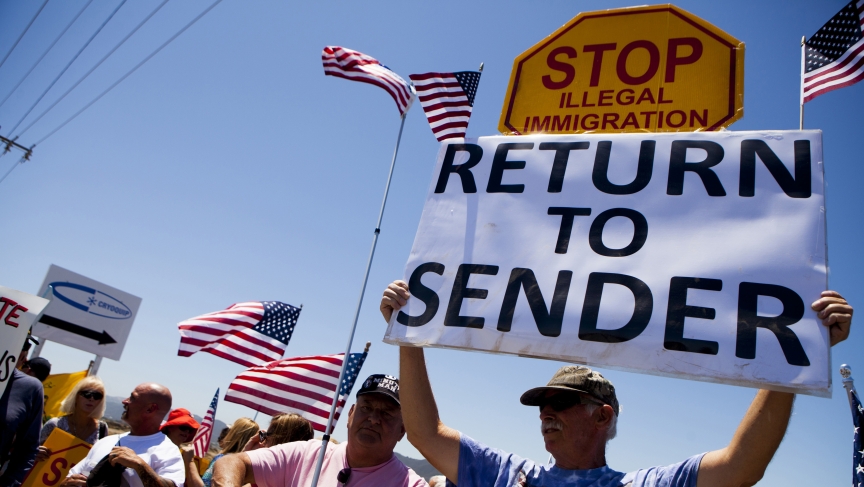 Demonstrators picketed against the arrival of undocumented migrants, mainly women and children, who were supposed to be processed at the Murrieta Border Patrol Station in Murrieta, California on July 1, 2014. The Homeland Security buses were then rerouted to the El Centro Border Patrol Station.
Credit:

Some people on the US side of the border are saying enough is enough when it comes to undocumented migrants.

The latest protests have erupted on the heels of a surge of immigrants, mainly women and children from Central America, fleeing their homes and illegally crossing the border into the US.

In the Southern California city of Murrieta, protesters blocked Homeland Security buses carrying migrants to a local federal processing facility. The buses were eventually rerouted to a facility in San Diego.

Emotions are running high. After the protest, Murrieta city officials held a town hall meeting in front of an overflow crowd. Some attendees chanted, "Send them back!" Others "booed" when President Barack Obama's name was mentioned.

Reporter Saul Gonzalez, with KCRW in Los Angeles, reported on the protest and Wednesday's town hall meeting in Murrieta. "You had a lot of very outraged people in this community meeting last night, who basically don’t want them [immigrants]," he says.

The latest numbers show more than 52,000 unaccompanied minors have crossed the US-Mexico border so far this year. The increase means the federal government's detention centers are filling up fast.

"The facilities in Texas and New Mexico are packed full, so they are flying them to other facilities in the Southwest and here in California," says Gonzalez. "They are supposed to go for a temporary period of time ... to essentially be processed and then they would be released. They would be sent to mass transit stations, where they’re supposed to go where they wanted to go and report in with an immigration judge."

He says that some of the Murrieta residents are worried that after being processed, the migrants would "just vanish into the wind ... and they might just stay in Murrieta and put pressure on their social services or educational system."

Murrieta is a predominantly Catholic, white, middle-class suburban city. But Gonzalez says there is also a Latino presence in Murietta. Those residents also voiced their concerns.

"I must admit," Gonzalez says, "it was like going from two worlds in this meeting last night, from the auditorium, which was largely white and older and anti-immigrant, to outside, where you had a lot of Hispanics who were pro keeping these families in the United States for a period of time. And it was just these two separate worlds of Murrieta. It was like looking through the looking glass from inside to outside. And all of them equally passionate."

Flyers being passed out warning people about communicable diseases from immigrants in Murrieta. pic.twitter.com/OWSYyzzfEx