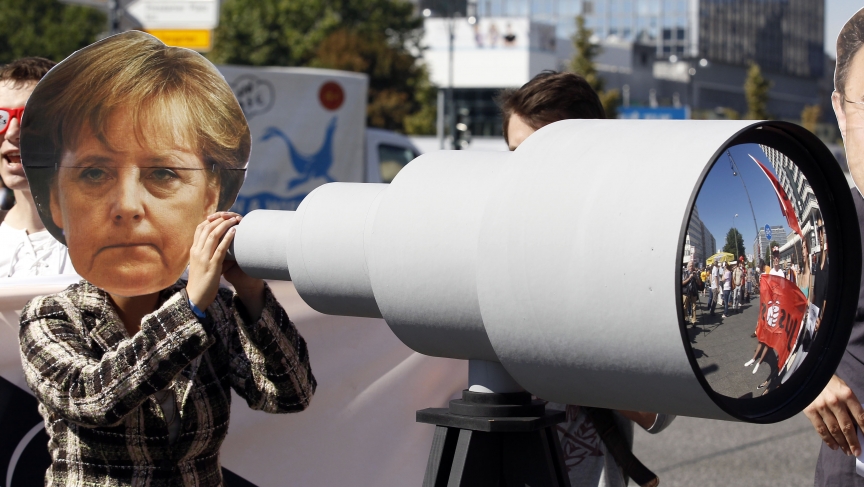 When it comes to spying on its own citizens the former East Germany certainly had a lock on things.

The Stasi secret police kept very close tabs on what East Germans were doing. And that dark past shapes the perceptions and political views of young adults living in Germany today.

Just ask Julius Mittenzwei. He's a lawyer and member of the Chaos Computer Club in Germany. Chaos Computer is hacker collective. It's a place for technology lovers to write software and gather. It's also an advocacy group committed to cross-border freedom of information.

They made big news earlier this year when they filed a criminal complaint against German Chancellor Angela Merkel. The New York Times reported:

The 32-year-old hacker group said in the complaint that Ms. Merkel’s government and German intelligence agencies violated the personal privacy of German citizens through “illegal and prohibited covert intelligence activities, along with aiding and abetting such activities” by tolerating and cooperating with the NSA and the British eavesdropping agency, known as GCHQ.

And just this week, they joined other Internet Service Providers from around the world to file a legal complaint against Britain's GCHQ. They claim the spying agency has waged attacks on their products.

The BBC outlined what the legal actions are based on:

1. Claims that employees of Belgian telecommunications company Belgacom were targeted by GCHQ and infected with malware to gain access to network infrastructure.

2. GCHQ and the US National Security Agency, where Mr Snowden worked, had a range of network exploitation and intrusion capabilities, including a "man-on-the-side" technique that covertly injects data into existing data streams to create connections that will enable the targeted infection of users the intelligence agencies used an automated system, codenamed Turbine, that allowed them to scale up network implants

3. German Internet exchange points were targeted, allowing agencies to spy on all Internet traffic coming through those nodes

Mittenzwei,  a lawyer, is one of members leading the charge on this. He says it's important for people to speak up for digital rights now, as technology becomes every more integrated into our daily lives.

"In the future every social interaction will have a component that is over the Internet," he says.

He point out that his country overcame two dictatorships. He says Germans know how much impact government could inflict by having reams of personal information on its populace. "So that's why we're so skeptical if a single person or state knows so much about you," he adds.