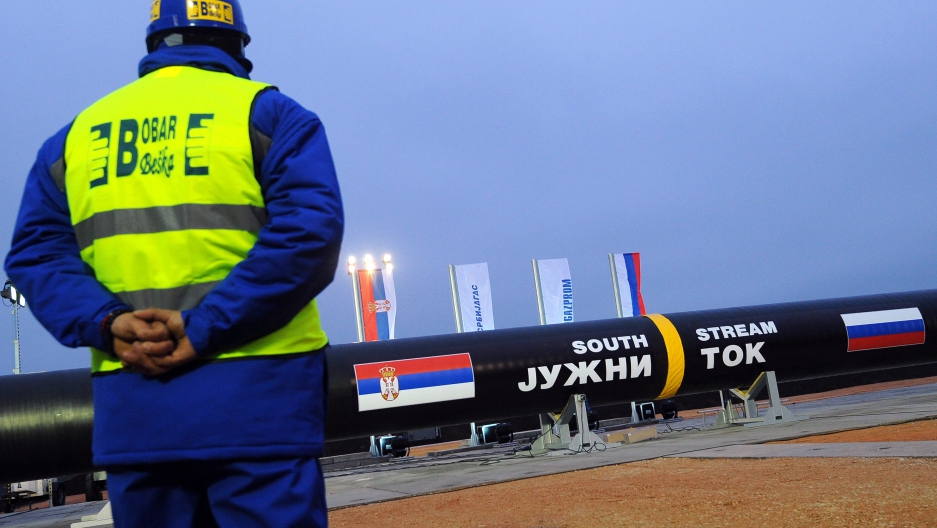 BERLIN, Germany — As the authorities in Ukraine step up assaults against separatists in the east of the country following the end of a tenuous ceasefire there, Russia is working hard behind the scenes elsewhere to dash their hopes of restoring some measure of stability.

Moscow is waging a propaganda campaign against the government in Kyiv in addition to apparently giving support to the pro-Russia rebels. But the Kremlin is showing its greatest depth in its moves to undermine unity among Ukraine’s Western supporters over sanctions and other measures that would punish Russia for meddling in the affairs of its southern neighbor.

For that, it’s relying on its most powerful trump card, a foreign policy tool it’s brandished for the last decade to stunning effect: energy.

German Chancellor Angela Merkel warned Moscow ahead of talks on Ukraine on Wednesday that economic sanctions remain an option if the Kremlin doesn't back peace efforts.

But a plan to build a major new pipeline that would pump Russian natural gas to Europe is helping drive a wedge between European countries that have so far united at least rhetorically against Russia's adventurism in Ukraine.

Moscow is hoping Austria, Bulgaria, Hungary and even Italy and France may soften their stances over Ukraine thanks to pressure from their own large energy conglomerates, which have signed very lucrative deals with Russia’s Gazprom natural gas monopoly.

“There's a legacy infrastructure problem for the European common energy market that is very difficult to reconcile,” he says.

Russia’s planned South Stream pipeline would have the capacity to pump 63 billion cubic meters of Russian gas a year directly into Southern Europe by way of the Black Sea. The route would enable the company to bypass Ukraine, where price disputes and unmonitored siphoning of gas has prompted two shutoffs that have affected supplies to Europe.

The North Stream pipeline, a similar 55-billion cubic meter conduit across the Baltic Sea that opened in 2012, has already cut the volume of gas that Russia sends through Ukraine by a quarter.

Ukraine has been able to use its role as a transit route for Europe-bound Russian gas to pressure European countries as well as the Kremlin.

But the addition of the South Stream would enable Russia to cut off supplies to Ukraine without hurting its own access to crucial European markets.

That would mean what happens in Kyiv or Crimea may no longer be of vital importance to countries like Germany that currently rely on Russian supplies for some 40 percent of their gas.

“South Stream and North Stream actually consolidate Europe's dependence on Russian gas,” she says. “If South Stream goes ahead, that dependence will be set in a pipeline under the Black Sea, so to speak.”

The pipeline could prove even more important for Kremlin-controlled Gazprom as it races to beat a growing list of of liquefied natural gas (LNG) suppliers and other competitors to a quickly changing energy market.

Mushrooming LNG terminals will soon be able to supply the entire gas demand of countries like France — which also receives piped gas from Norway and Algeria. Meanwhile, gas consumption is falling across Europe, making a drop in gas prices virtually inevitable.

At the same time, plans for a common European energy market that the EU hopes will help make diversifying energy sources easier would force Gazprom and other energy conglomerates to allow new competitors to use pipelines and electricity distribution infrastructure they built — giving the new arrivals an inherent cost advantage.

“[Gazprom] has to finance its competitors and it's selling less gas. And the unit price of gas is falling,” McKillop says. “Can you imagine a worse situation than that?”

So far, the EU has attempted to use antitrust laws that prevent gas suppliers from owning distribution infrastructure to weaken Gazprom’s control over European energy supplies.

But South Stream represents the company's bid to show Europe there's no compelling reason to diversify its sources after all.

Already, Austria, Bulgaria and other countries are demanding exemptions from the antitrust rules, and more trouble looks to be brewing.

On Tuesday, Hungary's Prime Minister Viktor Orban confirmed that Hungary will go ahead with building the section of South Stream that lies within its borders despite US and European objections.

The same day, Italy's state secretary for European affairs told Russia's state-owned news agency that his country, too, has “a strong interest in implementing it.”

More from GlobalPost: This Russian dashcam video of a biker gang attacking a motorist is insane, but not for the usual reasons

Earlier this week, energy experts speculated that rumors prompting a run on Bulgaria's largest banks and an EU move to shore up those institutions may have been salvos in a tussle over Bulgaria's section of the pipeline, which European officials ordered put on hold in early June.

“There is a basic economic role for Austria, an advantage for Austria, in supporting this project, so the political factors were sidelined,” McKillop says.

Moscow is surely hoping that logic will prevail in other European countries as the battle over Ukraine plays out in the months and years ahead.