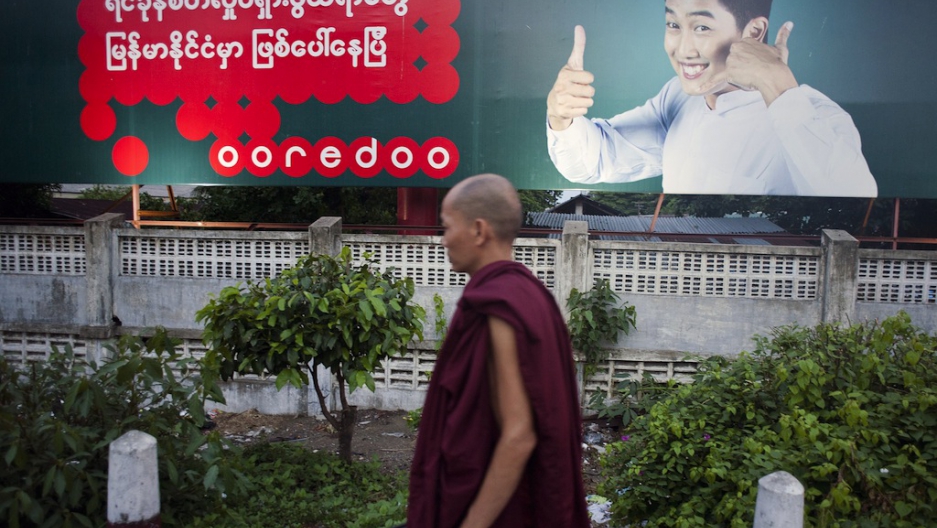 Ooredoo won one of two licenses in an emerging and lucrative telecom market, yet it is the target of a boycott, spearheaded by Buddhist monks upset that the company is owned by the government of a Muslim country.

Buddhist abbot U Parmaukha, a boycott leader, claims the phone services would “threaten the integrity of the Burmese nation and the (Buddhist) religion.” The boycott exhorts all Buddhists in Myanmar to avoid using Ooredoo’s services, and to refuse to answer any calls coming from its network.

The boycott is the latest development in the expanding anti-Muslim political activism of Myanmar’s revered Sangha (Buddhist priesthood), led by prominent monks such as U Wirathu and the xenophobic 969 Movement.

Local boycotts against Muslim-owned businesses throughout Myanmar have accompanied calls on the government to enact restrictive laws on inter-faith marriage, religious conversions, polygamy and family planning.

The government released the religious conversion draft law in late May for public review. Its text proposes wide latitude for local government officials to interfere in citizens’ right to change faiths by requiring official permission for such conversions. Opponents of the inter-faith marriage bill have been derided by Wirathu as traitors, and have received death threats.

Myanmar, also known as Burma, has been rocked by anti-Muslim violence since the persecution of the 800,000 stateless Rohingya Muslim minority spiraled into violent attacks in Arakan State in 2012. Local officials and monks were behind those organized attacks, in which more than 200 people died and another 140,000 were displaced.

Research by Human Rights Watch concluded that the attacks amounted to crimes against humanity in a campaign of “ethnic cleansing.” The violence then spread to countrywide communal violence against Muslim communities, most starkly in the central Myanmar town of Meiktila. More than 40 people, including a number of young children, were killed in March 2013 by Buddhist mobs, often encouraged by monks demonizing Muslims.

The rise of anti-Muslim and ultra-nationalist monks in politics is in stark contrast to other boycotts led by Buddhist monks at key moments over decades of military rule in Myanmar.

Monks allied with students after the military coup in 1962, and again in anti-government demonstrations in 1974, when scores were killed or imprisoned.

In the nationwide uprising of 1988, monks were pivotal moral arbiters and keepers of the peace leading the effort to quell violence by all sides. Their 1990 boycott of the military in the spiritual hub of Mandalay included a powerful boycott called pattam nikkujjana kamma, or “overturning the bowl,” in which monks refuse to accept alms from members of the military or their family. The effect of such a boycott is to excommunicate them. The spiritual danger to the military’s tarnished legitimacy led to violent attacks against the monks and the imprisonment of its leaders.

The monks’ played an iconic role in the 2007 popular protests calling for democracy that were violently suppressed by the security forces in full view of the international community. The outcry over the brutal crackdown was a contributing factor to hastening the system of “disciplined democracy” by which Myanmar is now ruled.

Prominent monks are no longer seen as barometers of social distress articulating demands for justice. Instead, they act as lightning rods for deeply rooted racism that ricochets through Myanmar’s uneven reform process.

In February, a group of 40 monks broke into a literary event in Rangoon to protest against the inclusion of two Muslim speakers in the program. The event, organized by Aung San Suu Kyi’s National League for Democracy party, was cancelled as a result.

This disquieting exercise of religious menace has deeply upset many quarters of Burmese society, regardless of faith. Buddhists feel too intimidated by the spiritual cachet of extremist monks preaching protection of race and religion to openly disagree with them; their weight of numbers — estimated at between 400,000 to 500,000 — is daunting.

Buddhist nationalists in Burma hold forth endlessly about threats to Buddhism and a future of Muslims swamping the country from neighboring Bangladesh. Yet as anyone visiting Myanmar would likely notice, Buddhism is thriving and decades of military rule have entrenched ethnic Myanmar and Buddhist elites in all key institutions, economic and social power.

Leaders of the Ooredoo phone boycott acknowledge the harm to investor confidence their campaign is having.

They have drawn mild criticism from the presidential spokesman and deputy minister of Information Ye Htut, who at times has also engaged in anti-Muslim behavior.

The more damaging fallout from the boycotts will be the amplification of anti-Muslim hate speech into discrimination and intimidation of moderate voices in Myanmar society. Political leaders will be reticent to confront rising racist nationalism that threatens to derail reforms, imperil basic freedoms and fuel further communal violence.

David Scott Mathieson is a senior researcher in the Asia Division of Human Rights Watch.