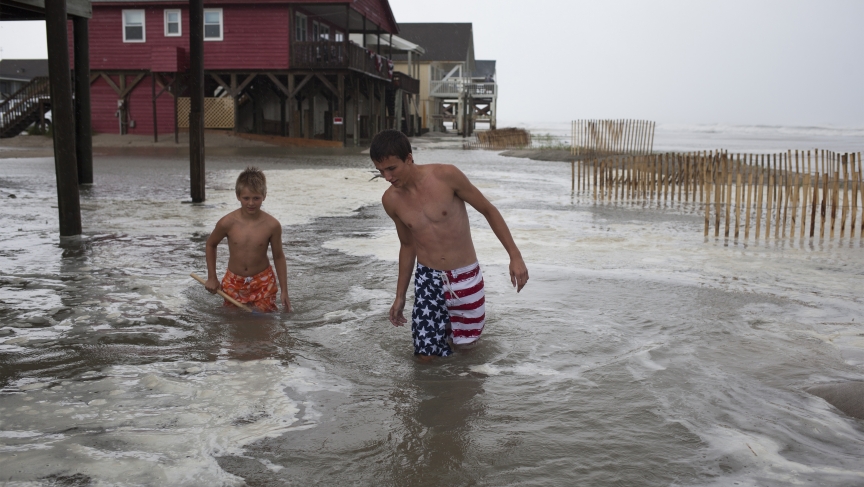 Surges from big coastal storms are a bigger and bigger problem as climate change raises sea levels around the world. That’s why a new service from the US National Hurricane Center in Miami could be so important.

“This is a pretty revolutionary step forward in our ability to predict and communicate storm surge,” says Jamie Rhome, who runs the NHC’s Storm Surge Unit.

In the past, Rhome says, the Hurricane Center relied largely on written releases to communicate on storm surges, but he says it’s very hard to talk about a hazard like storm surge on a local scale because it's so variable. "It could be one foot in one spot and then five feet of surge right down the road,” he says.

Now, with the first named storm of the 2014 Atlantic hurricane season — Hurricane Arthur, which was making its way up the east coast on Thursday — comes the first ever real-time storm surge map.

It provides what Rhome says is high-resolution mapping to let viewers zoom in and see where the water from an approaching storm could go in their own communities.

Storm surge happens whenever the winds and low atmospheric pressure of a big coastal storm combine essentially to raise the sea level along the coast and push water inshore. It's a phenomenon that most residents of coastal areas on the Atlantic and Gulf coasts of the US are familiar with, and which the rest of us got a chilling demonstration of less than two years ago when Hurricane Sandy pushed billions of gallons of sea water up and over New York City's waterfront and into its subways, tunnels and basements, causing billions of dollars of damage.

That was an extreme example, but it's the same force at work as with every big coastal storm.

Still, Rhome says it's been tough to convince residents only a short distance from the shore that it can happen to them.

“What this new map does, is allow them to visually see (that) the storm can, in fact, impact inland communities.”

The new online map is especially important because of two converging phenomena — sea level rise, and an influx of people into coastal areas.

“That means more people, more things, harder evacuations,” on the one hand, Rhome says, while on the other, rising sea levels create what he calls a “higher base” for storm surges to form upon.

“So if the sea level is rising even by relatively small amounts, say half a foot or a foot, that will make coastal communities farm more vulnerable to future storm surge events.”

The US has been hit by several catastrophic storm surge events over the past decade, including those caused by Sandy in 2012, Hurricane Katrina in New Orleans in 2005, and Hurricane Ike, which slammed the coast of Texas in 2008.

Rhome says it’s impossible to know for sure how the impacts of those storms might have been different had the new surge map been available. Still, he says, “people who were on the ground level during Sandy said that having this capability would’ve significantly changed the story.”

The new mapping system is getting a two-year trial to gauge its effectiveness and impact. If it shakes out as hoped, Rhome says the technology could find wide application elsewhere, as rising seas and tropical storms threaten more and more people around the world.

“Nothing this sophisticated and complex, to my knowledge, exists anywhere else in the world,” Rhome says.

In fact, he says, other countries have approached the hurricane center wanting to know about this approach.

“So my guess is this new capability will not only influence the future of storm sure forecasting here in the US but perhaps globally.”