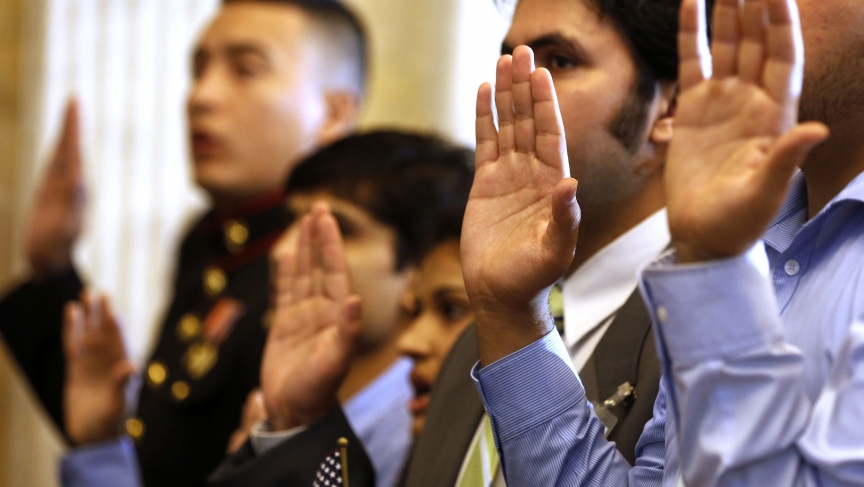 Candidates swear in as United States citizens during a Special Naturalization Ceremony for 30 US citizen candidates in the Cash Room at the US Treasury Department in Washington, July 3, 2013.
Credit:

Every year on the Fourth of July, at some point between the cookouts and the fireworks, thousands of foreign-born residents across the US become citizens through annual naturalization ceremonies.

It’s a tradition that holds great meaning for a country founded and advanced by immigrants. With Independence Day just around the corner, who makes up this latest crop of Americans-to-be? And how do they influence the politics of the areas in which they reside?

Dante Chinni, the director of the American Communities Project and a blogger for the Wall Street Journal, says the foreign-born population of the US has reached an all-time high.

Chinni says that while there may be a record number of foreign-born people currently living in the United States, these individuals are not evenly spread out across the country, concentrated in big cities and metropolitan areas.

"In the counties that hold the biggest cities in America, 23 percent of the population in those places are foreign-born," he says. "Some of the spikes are crazy — if you look at Queens County in New York, 40 percent of the population is foreign-born. ... But then when you get out of the big city areas it drops off, and it drops off pretty precipitously."

Outside of large cities — the foreign-born population is relatively small.

"These places are all below three percent in their foreign-born populations," says Chinni. "What you really see is a staggering divide in terms of how this issue, this issue of really immigration, is perceived in the United States."

Large cities tend to be the economic drivers in the United States, and they also have the highest foreign-born populations, Chinni adds.

"Texas gets very interesting," Chinni says. "What you have down there is these Hispanic centers, which is another place where you have big foreign-born populations — 20 percent of them are foreign-born. But in those places you don't really see a lot of Democratic movement in the vote because what happens is, you get down to some these counties in Texas and you're talking about places where you have such a large conservative white population that you really can't do anything."

Chinni points to places like Sutton County, Texas — almost three hours outside of San Antonio — which has a large foreign-born population of about 20 percent. However, during the 2012 presidential election, the county was a steady Republican voting block.

"What I think is happening in those places, though it would require a lot more study, is the foreign-born population is pushing the native-born Anglo or white population to be even more conservative and more Republican," Chinni says.

He continues: "The other thing to keep in mind is just the raw politics of it. These foreign-born populations moving in are very Democratic, and the population that's already there is very Republican. If anything, that forces both sides to get their backs up a bit, particularly the white native-born population that really wants to draw the line and make sure their place stays the way they think it should be in their mind, which is as Republican as it is right now."