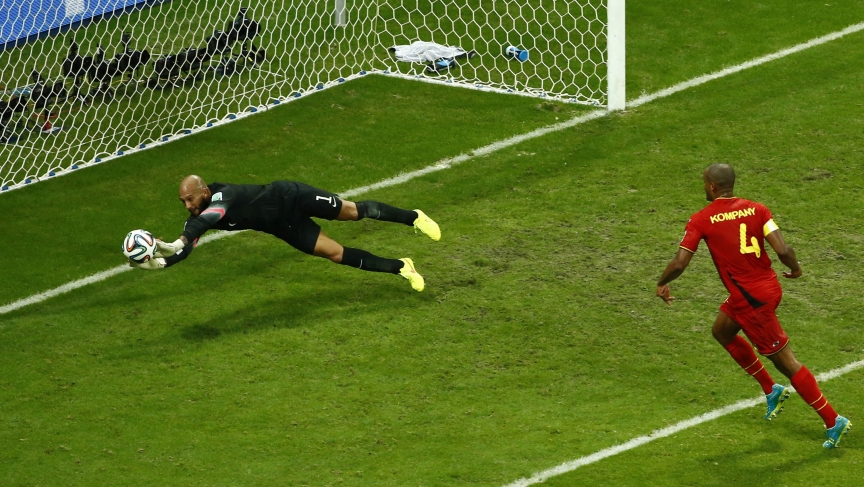 Goalkeeper Tim Howard of the US saves a shot during their 2014 World Cup round of 16 game against Belgium at the Fonte Nova arena in Salvador July 1, 2014.
Credit:

You probably know this by now, but Izzy, our World Cup predicting ocelot, was right: Belgium defeated the USA 2-1 on Tuesday, knocking the Americans out of the tournament.

Those were some bitter bamboo leaves to swallow, but he wasn't the only one tasting defeat. The World's soccer guy, William Troop, was at the game on Tuesday night in Salvador, Brazil.

“I and at least half the stadium were yelling, our throats hoarse, cheering on the US til the very, very end," Troop says. "When the final whistle went, half the stadium was celebrating — because there were a lot of Belgium fans, too — and half of us were sitting in our seats going ‘I can’t believe this is over.' So it was heartbreaking for sure."

The stadium wasn't just filled with Belgian and Americans. Troops says there were also plenty of Brazilians, many of whom adopted the US for the evening.

One of the few highlights for the Americans was was the outstanding performance of US keeper Tim Howard. He made 16 saves throughout the 120-minute game, setting a World Cup record for the most saves recorded in a single match. "He was like a bombardment victim," Troop marvels. Accolades for Howard have come in from all over the world, including a tweet from one of the players he frustated throughout the night: Belgian defender Vicent Kompany.

He certainly impressed Troop, who's a goalkeeper himself.

“They say goalkeepers are crazy, and it’s true," Troop says. "You gotta be a little crazy for the stuff you have to do to play like Howard did. Any other keeper, any other night — half of those [goals] would’ve gone in, Belgium would’ve won the game easily.”

The Americans may be out of the tournament, but this year's World Cup still seems like a huge win for soccer in the US. Record numbers of viewers watched matches in the US, and thousands of US soccer fanatics like Troop made the pilgrimage to Brazil, earning worldwide attention.

“Last night at the stadium it might’ve been 50/50 Belgians and US, but the Americans were cheering the loudest,” Troop says. “When those chants of ‘USA! USA!’ were getting going it was really goosebump-inducing.”