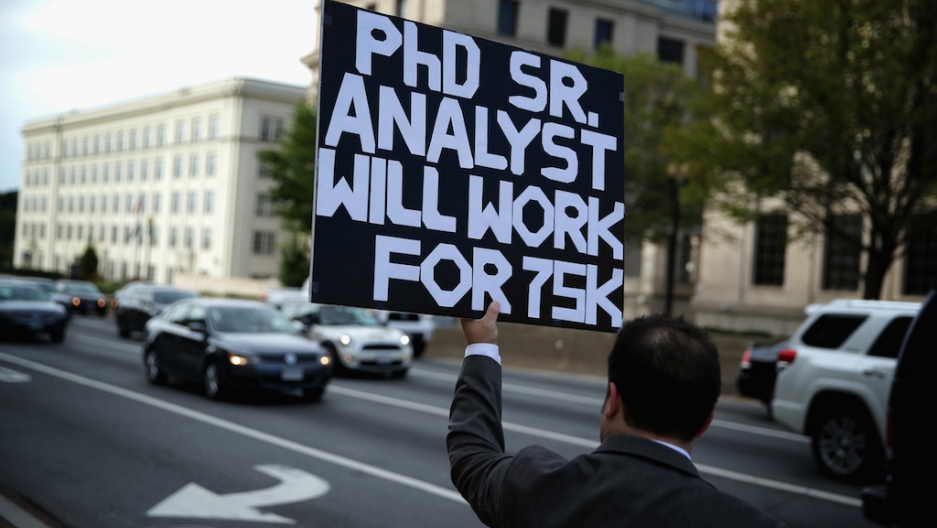 Matthew Giarmo of Alexandria, Virginia, who lost his contract job with the Department of Health and Human Services in 2012, holds up a sign seeking a job with a lower salary than he would normally ask for on a street corner in Washington, D.C. on Oct. 8, 2013.
Credit: Alex Wong
Share

It was no surprise to see these countries among the world's most fragile nations in a new report by the Washington-based nonprofit Fund for Peace.

But the United States? The world's most powerful democracy?

It didn't land anywhere near the top, but America was among 10 countries that have worsened the most over the past year, according to the 2014 Fragile States Index.

The United States came in at No. 159 among 178 nations and was rated "very stable," which was below "very sustainable" and "sustainable" but still much better than the five countries listed on "very high alert."

France was listed as the seventh-worsened country this year. The US tied with Singapore and Thailand for the eighth spot.

"The recent worsening of the United States, France, and Singapore also shows us that instability is not exclusive to developing countries," Fund for Peace said in a press release.

The United States made the list for various reasons. Here are some of the most notable:

Congress can't cooperate and can't get anything done. President Barack Obama has increasingly bypass the country's lawmakers, resorting to executive actions to deal with key issues like gay rights and immigration reform. The House and Senate passed just 67 bills last year, the fewest since records started being kept in 1947. Congressional approval ratings are also at record lows.

Last year's partial government shutdown was indicative of just how bad political gridlock has gotten in the United States. Still smarting over the passage of Obamacare, conservative Republicans refused to sign off on funding bills that didn't contain language delaying or defunding the president's health care law. The result? Shuttered national parks and monuments, stalled business loans and contracts and as many as 800,000 federal employees furloughed for two weeks. The political standoff ended up costing taxpayers $24 billion and actually decreased fourth-quarter GDP growth from 3 percent to 2.4 percent.

While the US economy has finally recovered all of the 8.7 million jobs lost during the recession that followed the 2008 financial crisis, many are still struggling with unemployment and the gap between the rich and the poor continues to widen. About 50 million Americans live below the poverty line and a record 47 million of them receive food stamps — more than when Obama took office. Through March, the economy actually contracted by 2.9 percent — its sharpest decline in five years.