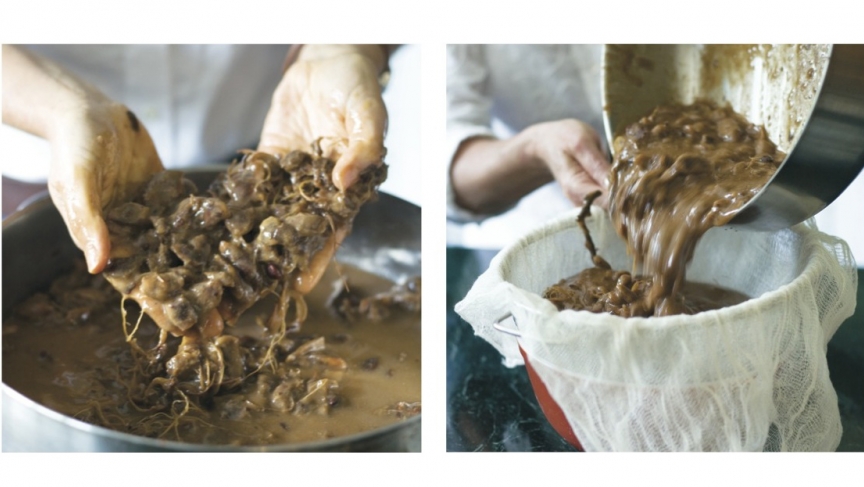 Syrian Jewish cookbook author, Poopa Dweck, soaks tamarind overnight and then strains the softened fruit to make ou'. It's a sweet and tart paste that, according to Dweck, is the secret ingredient in many traditional Syrian dishes.
Credit:

In Poopa Dweck's kitchen, everything is just so.

The six-burner stove is covered with an elegant tile range hood, with a mirror for a backsplash; a cookbook rests on a stand by the sink, next to neatly folded dish towels. She has the window open, and, even on this foggy day by the shore in Deal, New Jersey, the birds chirp pleasantly.

Dweck spends a lot of time in her kitchen — in fact, the cookbook out on the counter is the one she wrote seven years ago: "Aromas of Aleppo."

This is the 388-page bible of Syrian Jewish cooking. Dweck, a Syrian Jew herself, spent years gathering the stories of her culture's culinary history, with the recipes to match.

Syrian Jews have established a year-round community of a few hundred people in this seaside New Jersey town. 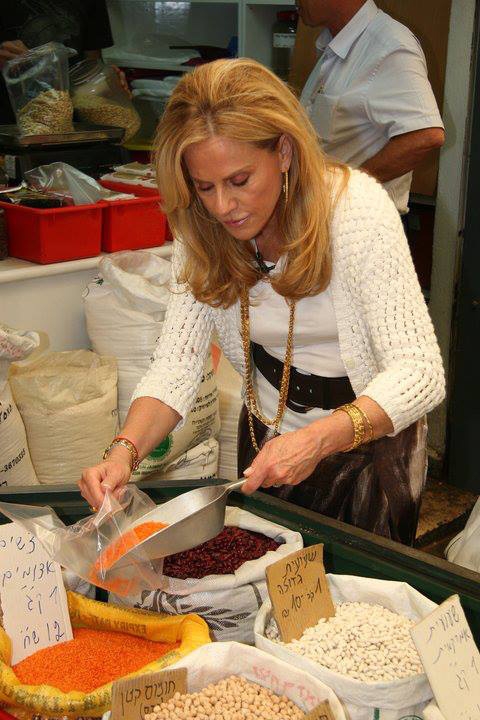 Deal and the surrounding villages, with their orthodox synagogues and Syrian kosher markets, have also become the de facto summer vacation spot for many of the 75,000 Syrian Jews from South Brooklyn. The Syrian Jewish communities in Deal and Brooklyn tend to be religious and tight-knit, though over the years they've welcomed in other Jews from the Middle East, as well as the occasional European and Persian Jews.

Syrian food culture remains a tie that binds. Forget the kugel or smoked fish you find in other Jewish communities in Brooklyn. Syrian Jews luxuriate in the culinary riches of the Middle East. Think stuffed artichokes and eggplants, hummus and lots of kibbeh (meatballs made with ground rice).

Dweck has made it her life's work to document Syrian Jewish cuisine. And she's become something of an expert on a quirky component of the cuisine that's not shared with other Middle Eastern traditions: tamarind.

The fruit, which grows in a brown pod on the tamarind tree, flavors everything from meat-stuffed grape leaves to bulgur wheat salad. Dweck calls tamarind the "sour secret of Syrian cooking," and loves talking about its cultural history.

Tamarind came from India via Persia to Aleppo, Syria, in the seventh century.

"With the camel caravans coming through at the end of the Silk Road, Aleppo was known for its largest souks [markets], its largest cans [warehouses]," Dweck said.

For some reason, Persians didn't incorporate the fruit into their cuisine, but the Syrians did. It became the sweet-and-sour flavoring of choice when other Middle Eastern cuisines might use pomegranate or other fruits.

When cracked open, the brown tamarind pod reveals a date-like fruit laden with fibrous strands and tiny pits. Syrian cuisine doesn't use the actual fruit; it just uses tamarind as a flavoring. That requires an hours-long process of making ou', or tamarind concentrate.

"What I like to say is that you need to visit with it and stay with it," said Dweck. "It's your day."

To make ou', Dweck soaks the shelled fruit in water for several hours. She then pulls it apart and strains it through cheesecloth or a colander to extract the tamarind-flavored liquid. She cooks down this liquid with sour salt, lemon juice and sugar, until it takes on a velvety texture.

"When it's prepared properly, it should be like lip-smackingly [tasting]" Dweck says, smacking her lips to illustrate the experience of eating intensely tart ou'.

Dweck swears by the homemade ou', even though she could easily purchase it pre-made in the kosher markets of Deal or Brooklyn. It's part of her larger philosophy of cooking and eating.

"I really feel that the food is a vehicle, a means of getting us to understand a culture, to help us find who we are, to keep us close," Dweck said. "The women" — the main cooks in most Syrian Jewish households — "get a tremendous amount of credit for keeping the community together."

Indeed, Dweck credits her late mother with passing on an incredible appreciation for fine food and fine ingredients. Dweck didn't learn to cook until she was married, at age 18. "My mother was very patient and she taught me everything: the techniques, the textures that should be achieved."

Dweck has dedicated her life to teaching other Syrian women these same culinary lessons. She travels the world, visiting Syrian Jewish communities and doing cooking demonstrations. And she's working on another cookbook, focusing on some of the lesser-known Syrian Jewish dishes, such as meat-stuffed quince.

"My book was not only to document my heritage and my legacy," Dweck said. "It was also to inspire others to realize that they have legacies, they have rituals, they have dishes that they could preserve."

You can hear a longer version of this story on Vox Tablet, the weekly podcast of Tablet Magazine: http://www.tabletmag.com/podcasts/176314/taking-on-tamarind.

Recipes from "Aromas of Aleppo" by Poopa Dweck