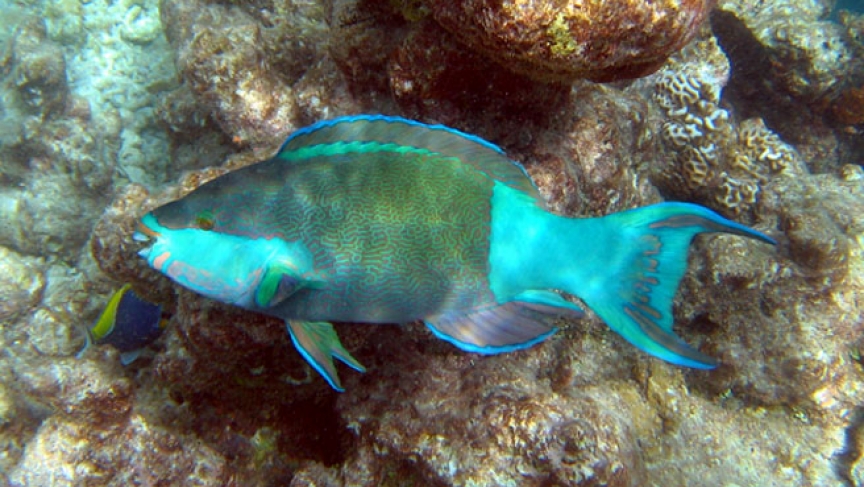 Scientists and environmentalists are sounding the alarm over the future of the Caribbean reef system.

A series of 35,000 surveys, done over 40 years in more than 100 locations, shows the Caribbean coral system has declined by almost 50 percent. If that trend continues, it will mean the effective end of Caribbean coral reefs in 20 years. The Guardian reports that the decline has been traced to the decline in crucial sea creature populations: specifically, sea urchins and parrotfish.

Fortunately, scientists say, rebuilding the populations of parrotfish, sea urchins and other threatened species could reverse the rate of coral decline and even help the reefs grow back to their former size.

These parents pay to get their children into the army

The world's largest army has no shortage of manpower. Slots in the Chinese Army are so prized that parents are paying the equivalent of $16,000 to ensure that their kids win a spot in the country's armed forced. The payments help grease the wheels, so that a failed academic or physical test doesn't disquaiify the applicant.

Bloomberg looks at the endemic corruption for the coveted slots — which many familes see as the best way for a child to get out of rural villages or even find a stable, well-paying job. It's another area that Chinese President Xi Jinping will need to tackle in his effort to rein in the country's corruption.

The sour secret of Syrian cooking is revealed

PRI's The World visited the kitchen of Poopa Dweck, a Syrian Jew who has made her home in coastal New Jersey. Far from the Middle East, she keeps the flavors of home alive through her cooking  — and has published a cookbook of Syrian Jewish recipes. Dweck was making ou' — the tamarind paste that gives Syrian cooking a distinctive, sour flavor — when The World visited.

Dweck shared a secret family recipe for a dish called Helou Mishmosh, or candied apricots, that her mother shared with her the day before she died. There's a copy of the recipe — and instructions for making ou' — at PRI.org.

ISIS sets its sights on a new target: The Vatican

The Papal Swiss Guard better get ready. Abu Bakr al-Baghdadi, the self-proclaimed leader of the ISIS jihadi group and Caliph of a new Muslim "state" in the Middle East, has said he is planning to bring his battle to non-Muslims around the world — and Rome is next.

ISIS has had considerable military success in Syria and Iraq. Now, al-Baghdadi is calling on Muslims from around the world to move to his new state and to take up arms to enlarge the empire of the faithful. The Telegraph reports on al-Baghdadi's latest speech and the role social media may play in it.

Starfish are wasting away in the Pacific

Along the Pacific Coast, starfish, or sea stars, represent an important check and balance on the aquatic ecosystem. The diminutive creatures are actually apex predators, eating muscles and other organisms under the water. But the population of sea stars is declining rapidly, as a disease called Sea Star Wasting Syndrome moves across the oceans and through the population.

PRI's Living on Earth looks at efforts to study the disease and ways to contain it — as well as natural conditions that are promoting its spread.

That tropical system that was stewing off the coast of Florida earlier this week has become a full-on tropical storm, packing 60 mph (96 kph) winds and threatening to become a hurricane in time for July 4 celebrations across the northeast US, according to the National Hurricane Center. Over the next five days, the storm is predicted to skirt along the eastern seaboard, bringing rain and high winds, before it slams into Atlantic Canada over the weekend.