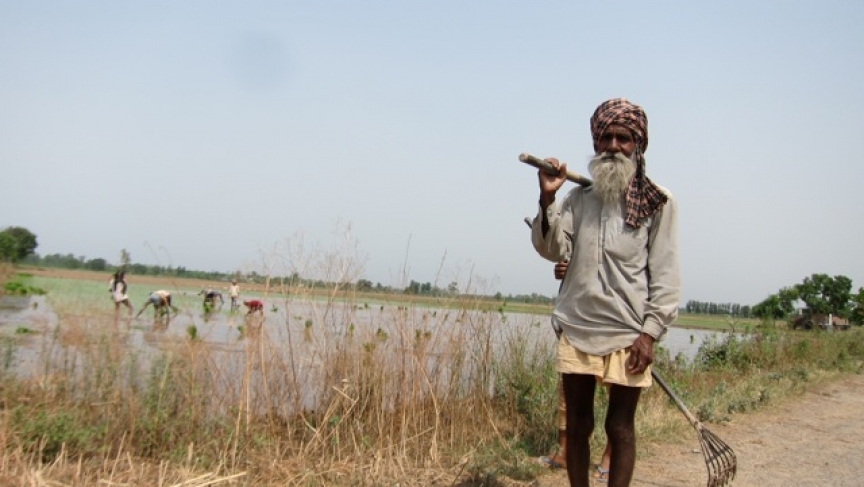 The Indo-Gangetic Basin, which lies at the foothills of the Himalayas, is one of the areas in the world facing a huge water crisis.  The Basin spans from Pakistan, across Northern India into Bangladesh. Apart from runoff from mountainous streams and glaciers, it also holds one of the largest underground bodies of water in the world. But it’s also in one of the most populous regions of the world, with more than a billion people living on the subcontinent.  Still, parts of the region are well-resourced when it comes to water supplies - like the Indian state of Punjab, which has three rivers running through it and a network of canals in some parts.

But Punjab faces serious water shortages and a groundwater table that is falling dramatically. As in California, farmers have been tapping into groundwater supplies via tubewells. There are 1.3 million tubewells in the state, and officials say almost all farms have at least one. There are permits for 90,000 more wells awaiting approval. As a result, the water table is dropping by as much as a metre a year, particularly in the worst-affected regions in central and northern Punjab. It is an alarming figure, and one that has water experts around the world sitting up and taking notice.

There is a complex web of reasons for the overuse of groundwater - but so far, just a few suggested solutions have been followed up by local authorities.
Farmer Gupinder Singh has a holding of 14 acres about an hour’s drive outside of the state capital Chandigarh, in central Punjab. The 28-year-old has been farming for eight years, inheriting the business from his father before him.  In that time, he has seen groundwater levels drop, and has been forced to sink his submersible motor lower.

Gupinder has also seen a drop in the quality of his water.  “It is getting dirtier,” he says. “It has gotten polluted by pesticides and chemicals.” 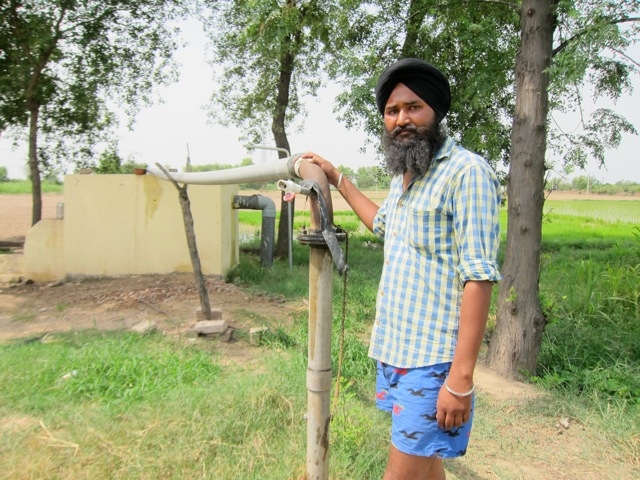 Punjab’s groundwater problem has its origins in India’s Green Revolution, which was launched in the 1970s as a wide-scale bid to bring home-grown food security to the world’s second most populous country.  Government subsidies, mechanisation and technology were introduced to encourage Punjabis to turn their lands over to commercial farming.  As a result, 97% of Punjab is irrigated, and the state is described as the breadbasket of India.

These days rice is the crop of choice - but rice is the cause of the problem.  Farming rice paddy fields requires a lot of water - more than three times the amount of water that Punjab usuallly gets in rainfall each year.  And while surface water from canals fills in part of the shortfall, it’s not enough, so groundwater is needed.  In addition, farmers receive free electricity from the state to run their submersible motors.

Like other farmers, Gupinder Singh is not too concerned with the drop in the water table. Rather, he’s worried about how much it will cost him to reach the water that is there. Right now, our submersible motor is at 250 feet,” says Gupinder. “If it goes any deeper, we will need bigger motors and for that we will put, let us say, a motor of 30 horsepower. We will have to install meters and bear more expenses.”

The government has done little to regulate groundwater use as it’s political: as farmers and their families make up around 60 percent of Punjab’s population, they represent valuable votes.  At the same time, many Punjabi politicians and officials come from the farmer class. It all adds up to enormous political clout. At the same time, farmers are also tacitly encouraged to grow wheat and rice, as the government buys whatever excess stocks they cannot sell at market.

But while there is little pressure from the government on farmers to think about water conservation, the state is pushing some small measures to address overuse of groundwater. One is the use of a laser-guided levelling machine, referred to locally as a laser leveller.

When I visit Gupinder Singh’s farm, a few weeks before the scheduled arrival of the monsoon, an operator is hard at work driving a tractor over dry fields with a laser leveller attached to the back.  The machine communicates with a receiver which guides it on how much to level, and where to go.

The aim is to achieve as smooth a surface as possible, usually at a small slope, so that less water is used.  “With use of this, water stands easily at one inch across the entire field,” says the farmer. “If the field is not level, water is not evenly distributed and the motor is also used longer to irrigate hte fields. By using the laser leveller, the field is irrigated faster and is evenly spread.”

In another part of Gupinder’s farm, fields have been flooded and workers are wading ankle-deep planting rice seedlings.  Punjab suffers a hot, dry summer for a few months in the lead up to the onset of monsoon rains, which generally come in late June. 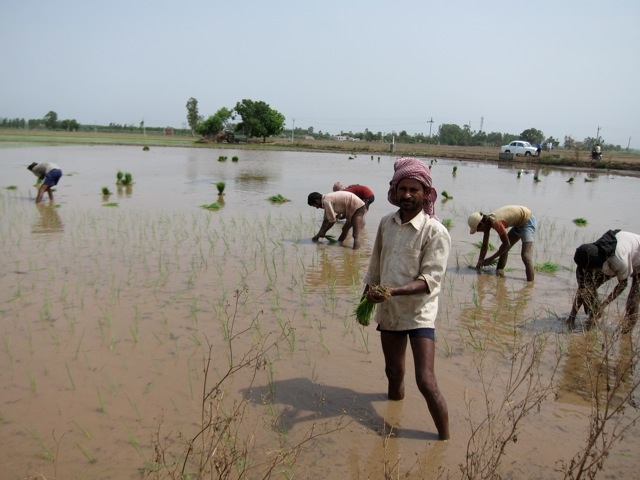 In the past, farmers would plant the seedlings in May and pump groundwater for several weeks until the rains arrived.  But a few years ago, the government decreed that farmers could only start planting after June 15th, closer to the start of the rains.  This has helped check water use, although hasn’t fixed the problem, according to Dr Bharat Sharma of the International Water Management Institute, in New Delhi.

“[Overdrilling] definitely poses a very serious hydrological threat and a very particular level of threat to food security, not only for this part of India but it could be a problem for regional food security,” says Dr Sharma.  He says India depends too heavily on Punjab state, and changes should be made.

“We can take a large amount of paddy production to the eastern region, where there is a lot of water available and not much stress on water resources.”

Dr Sharma also suggests that Punjabi farms, which already have good infrastucture in place, could be turned over to higher value crops, such as fruit, vegetable, meat and dairy.  It is advice that Gupinder Singh has already heeded. He has diversified his crops, and as well as rice, also plants sugarcane, wheat and a bit of animal fodder.

He says he would like to grow maize, a crop that many experts would like to see more widely grown in Punjab, however points out that wild buffalo roam nearby and would likely eat the crop. 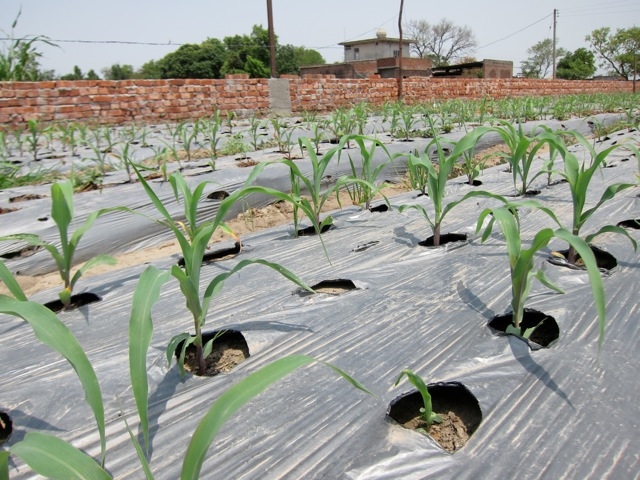 About ten kilometres away, another farm is making use of government subsidies aimed at trying to reduce reliance on groundwater.  Farmer Jaswinder Singh has successfully grown his first crop of strawberries after setting up his farm just eight months ago. With help from the government, he installed a drip irrigation system, also called micro-irrigation. As it drops water straight onto the roots of the plants, where it’s most needed, it saves a significant amount of water.

“There are a few benefits with drip irrigation,” says Jaswinder.  “First, it saves water. Second, with this system we can control the water, which makes it easier to pluck the strawberries. Right now only the top soil is wet and it makes it easier to move around. With too much water the crop gets spoilt and over ripe.”

Local soil officer Gurbinder Dhillon has travelled to the farms with me to see first-hand how farmers are faring using drip irrigation. “He has saved about 70 percent using drip irrigation,” says Mr Dhillon. “The government subsidy is 75 percent, and we are raising it to 80 percent in coming months.”

Still, these innovations are having only a limited effect on reducing India’s agricultural dependence on groundwater. Without political will, the rapid depletion of Punjab’s water table will continue.