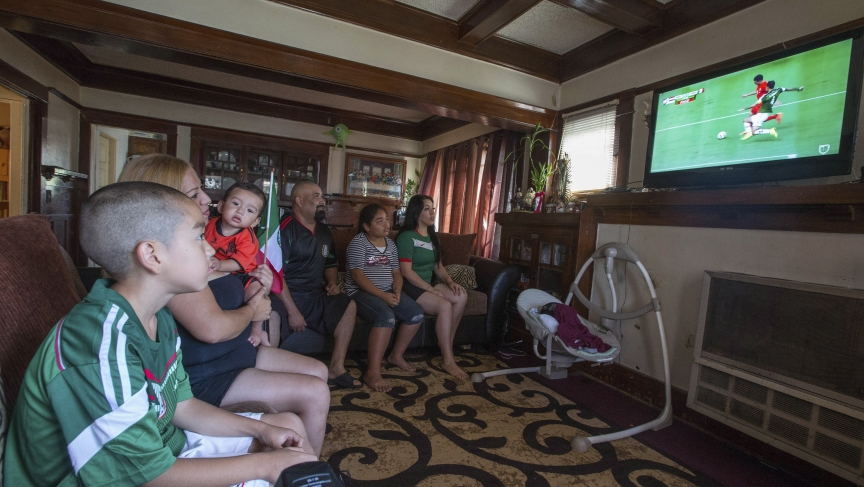 A group in their living room watching Mexico lose their 2014 World Cup round of 16 game against the Netherlands, in the Huntington Park, California on June 29, 2014.
Credit:

When Félix Sánchez, co-founder of the National Hispanic Foundation for the Arts, told PRI’s The World that Univision’s World Cup commentary surprised him, many of you were surprised as well.

Sánchez said he was dismayed by Univision commenters’ use of words like “greña” and “moreno” to describe players. While many people in Latin America are comfortable with these words, American broadcasters, he said, need to adjust.

“There has to be adjustments linguistically because we’re not necessarily in the same worlds. We’re one foot in each world,” Sánchez said.

Jesse Dhillon said that Sánchez’s critique did not account for parts of languages and cultures that cannot be translated:

"The point of Univision is to reach people who participate in the Latino culture, in the US market. They're not using racial slurs to refer to players; they're using familiar nicknames. The bottom line is that you can't translate into US English what they're saying without losing something important."

Many commenters related Univision commentators’ language to their own families’ use of nicknames. Gabriel Guido said his cousins called him “güero,” or light skinned, when he was growing up, but that it was never offensive to him. He wrote that the critique of Univision is “over-sensitivity run amok.”

Antonio Miller said that though these words might be used at home or among friends, broadcasters on air should not have a double standard by using white players’ names but nicknames for Afro Latino players. He wrote:

"I am Moreno, and proud to be and I am not offended by its use in our culture because I know that it is not meant as a racist term ... I am proud to be black and Latin and love when I am referred to as Moreno. However, if I go to a job interview, I would not expect the interviewer to refer to me as a Moreno when speaking to me or about me to any of his colleagues. He should refer to me by my name. The same should apply in sports."

Samantha Romaine also emphasized the importance of context: “I can affectionately refer to my little boys as ‘my little monkeys’ but if I were to refer to a dark skinned footballer on the field as ‘look at that little monkey run,’ it's not so affectionate then, right?”

"I'm from Nicaragua (Central America). I call my darker friends negro and my lighter friends chele. (Moreno is somewhere in the middle of white and black.) I've yet to meet a person who gets offended by being called any of these names. I only have one question. If this same scenario had occurred with a white, blonde, blue-eyed player, where he was the only player being called by the color of his skin, would this discussion be happening? I doubt it. If most Latinos are 'brown' why would it be offensive to call black people black but not if we called white people white?"

Chema Guijarro points out that sensitivity comes on a sliding scale.

"It also has to be noted that Univision is definitely more PC than Mexican broadcasters. Univision edits out the 'Puto' chant that Mexican fans use whenever an opposing team's goalie kicks a ball into play. (That chant is currently being scrutinized by FIFA.)"

The website Latino Rebels also saw lively debate around Sánchez’s comments, including this perspective from Vicenta Del Carmen Valero: "It is sad and heart breaking how we have internalized and integrated racism into language and defend it as part of our definition of culture. We can be better than this as a people. We must be better."

Find more discussions about culture and diversity in the US in the Global Nation Exchange on Facebook.