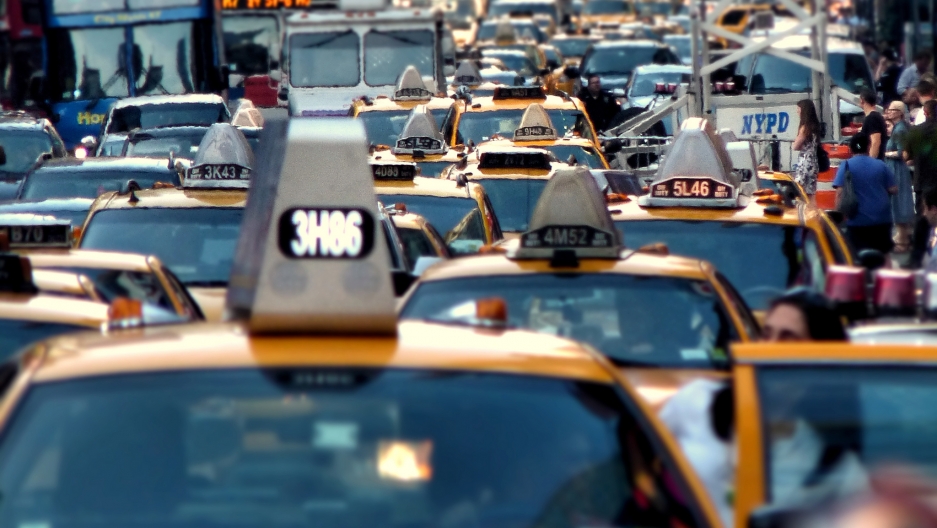 Traffic piles up in New York City's Times Square. New York is one of the cities that attempted to introduce "congestion pricing" — fees for driving at peak hours — but the plan was rejected.
Credit:

If you live in Moscow, Istanbul, New York or Rio, you're part of some of the worst traffic jams in the world. But we're guessing that you hate traffic no matter where you live.

So what's the fix?

Except in the biggest cities, it's usually unavoidable, to some degree or another. But Kara Kockelman, an engineering professor at the University of Texas, wants to improve your commute — though you might not like her solution.

She aruges for a simple approach to reducing congestion: tolls. "The single best thing that has been argued for decades, if not a century, is really pricing," she says.

If you have a car, you've probably paid road tolls. And if you drive often, you probably use an electronic tag — the east coast's E-ZPass system, for example — that lets you pay remotely and breeze through toll booths.

But Kockelman says we're barely channeling the power of technologies that can improve tolls. She proposes replacing those tag system with GPS trackers, which "have become so inexpensive that many manufacturers are already putting them on our vehicles." Highways would be able to see how drivers use the road and charge them accordingly.

Kockelman says that, just like anything else you consume, the use of roadways should be open to the whims of the market. The more popular the road and the busier the hour, the more you pay.

"Pricing signals are what equilibrate almost every market for any good or service," Kockelman says. "Roads are an important public good, but we will continue to see them congested unless we have proper pricing signals."

But there's also a development on the horizon that could, unexpectedly cause even more traffic: self-driving cars. They're usually seen as a way to dramatically reduce congestion. But Kockelman says they could just lead to more cars on the road and more overcrowding.

"The problem is that driving will become so easy," Kockelman says. You'll be able to sleep and read en route, so we will see a surge in driving. You might even see empty vehicles on the road, sort of like a taxi. That's a lot of added travel. So you're still going to need the pricing."