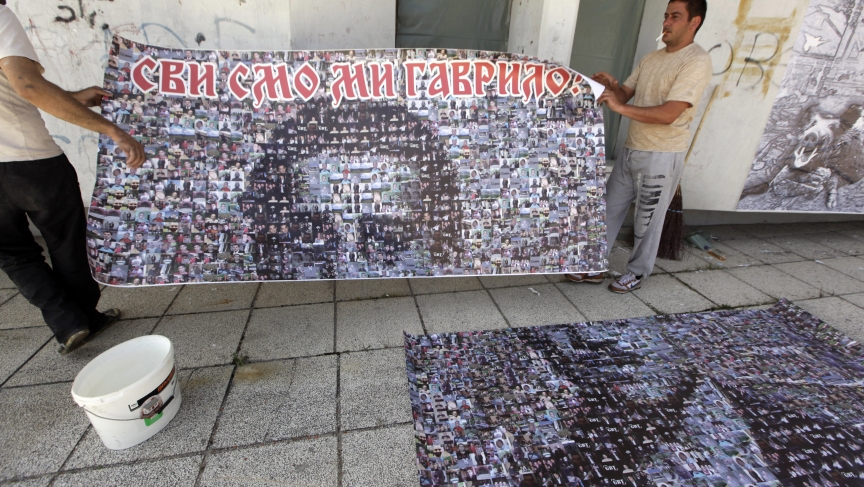 People put up a poster of Gavrilo Princip, the 19-year-old Bosnian Serb who gunned down Archduke Franz Ferdinand in 1914 and lit the fuse for World War One. The banner says "We Are All Gavrilo."
Credit:

To understand the current crisis in Iraq, you’d be wise to dust off your old high school history books and turn to the chapter on World War I.

We all live with the legacy of the “war to end all wars,” which was sparked on a late June morning 100 years ago when a Serbian nationalist assassinated Archduke Franz Ferdinand, the presumed heir to the Austro-Hungarian throne.

The events of that morning set off changes not just in Europe but across the world: empires collapsed, boundaries were redrawn, countries ceased to exist and others were born. We also live with the consequences of the flawed peace process that ended the World War I. Colonial powers, including Britain, France and the United States, drew up new boundaries on maps and created new countries, like Iraq, Yugoslavia and Palestine, to fit their interests.

Dan Damon, a reporter for the BBC is reporting from Bosnia at a place called Andrićgrad — a recreation of different buildings from different parts of Balkan history. At the site, musicians perform to commemorate the brutal moment a century ago that set in motion one of the harshest conflicts in world history.

About 60 miles away in Bosnia's capital city of Sarajevo, the site where Ferdinand was shot, Damon says many Serbs want nothing to do with the history project.

"They've been holding their own here [in Andrićgrad], and there's a reason for that," Damon says. "I've been speaking to the mayor of Sarajevo, and he says that Bosnian unity is something that both Serb and Croat nationalists are simply not going to allow, even though their leaders signed agreements in Dayton in 1995. What they want to achieve, according to the mayor of Sarajevo, Ivo Komšić, is a breakup of Bosnia — which they could not achieve through force."

Nationalism may have been the catalyst for the Great War, but it still runs very deep in this region.

"Politicians misuse emotional aspects of our history to cover their own incompetence," says Dennis Gratz, a center-left politician who spoke with Damon. "The whole historical process is observed as, 'we [are] the victims and we have to defend ourselves. And if you don't elect us as your representatives, you are doomed.'"

But not even nationalism is a simple idea. Damon says historians still disagree over just who Gavrilo Princip, the man who shot Archduke Ferdinand, was trying to support when he pulled the trigger.

"Was he fighting for Serbia — and certainly Serbia gave him the gun — or was he fighting for all Serbs who were under the control of empires, including the Austro-Hungarian empire?" Damon ask. "Or was he fighting for Yugoslavia — for South Slavs? And, of course, Yugoslavia, or 'the Kingdom of Serbs, Croats and Slovenes,' as it was first called, was created out of the ashes of the First World War. What's significant is, it's history — it's 100 years ago — but here it feels so alive."

The Lessons Still to Be Learned

Charles Sennott, the co-founder of GlobalPost and head of the GroundTruth Project, says that while the start of World War I may be 100 years behind us, the events that led to the great conflict still matter a great deal.

"Looking at the way contemporary conflicts are ... taking shape along the lines that were created by the maps drawn during and in the immediate aftermath of World War I [is] amazing," Sennott says. "These maps are now being erased. ... You see ISIS openly talking about wanting to erase that history, to cross those lines and create a new map of the Middle East.

Sennott says that the Kurds, too, have a desire to reshape the map and reclaim Kurdistan with a capitol based in Kirkuk, a city located in northern Iraq. "The Kurds are saying the same thing in a different language and in a much more nicer, diplomatic way," he says.

That redrawing of the map isn't limited to the Middle East. "This is dramatically unfolding not only there, but also in Nigeria," Sennott says. "It's very much fueling the ideology of Boko Haram — the notion that Western colonialism and its education is blasphemeous."

Sennott thinks that the world is perilously close to another Great War. Books like Christopher Clark's "The Sleepwalkers: How Europe Went to War in 1914," detail how the current geopolitical situation is similar to how the world looked on the eve of World War I.

"We have a multi-polar world in which there are rising and declining empires. That creates great uncertainty, and seemingly small events can just erupt into world or regional conflagrations," Sennott says. "I think that's the context in which a lot of people are looking at Iraq, and it's why everyone is so worried."

The effects on former colonies are obvious, but the major world powers who drew the maps aren't immune to change, either.

"The United States is in a moment where its rhetoric is disconnected from the way we really carry ourselves in the world," says Sennott. "We talk about democracy, but did we really stand up for it during the Arab Spring? We talk about these grand issues that inform the narrative of our country, but to the world we're not living up to them."

Sennott again turns to the work of Christopher Clark as an example. If World War I can teach us anything, he says, it's that the balance of power can shift in an instant.

"Empires can decline — they can decline rapidly — and that can create a time of great uncertainty," Sennott says. "I think Clark was right on the money — we're living in a moment where there's a lot at play, and it's really time to dust off the history books."

Check out a video clip from "The Eleventh Hour":