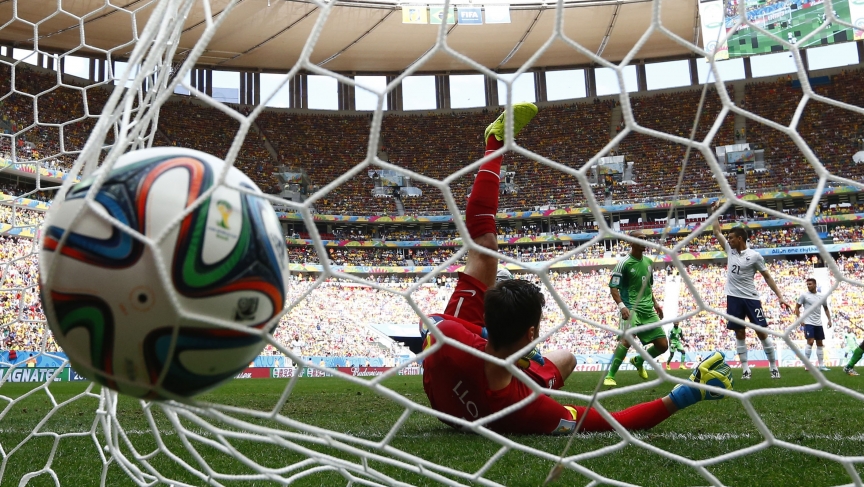 France's goalkeeper Hugo Lloris fails to stop a shot by Nigeria's Emmanuel Emenike during their 2014 World Cup round of 16 game at the Brasilia national stadium in Brasilia June 30, 2014. The goal was later disallowed.
Credit:

Soccer wouldn't be soccer without the announcer calling out the elongated “Goooooooooooooal!” after one team scores.

The cry has become a symbol of soccer worldwide, but it has a more humble origin — in Brazil in the 1940s.

The first broadcaster to scream out the distinctive “Goooooool!” was the Brazilian radio announcer Rebello Júnior.

“Before his time, everyone would call ‘goal’ like the British announcers here in the states do,” said reporter Fernanda Santos, who wrote about the origins of the cry for the New York Times.

Júnior, according to Santos, basically borrowed something from soccer fans who would howl “goal” in the stadium during the games.

“At the time, soccer was mostly consumed over the radio especially in Brazil. People in the hinterlands would hear soccer games on the radio,” Santos said. “It was largely a question of bringing the game alive to people who didn’t have the benefit of the images on the screen.”

The cry has become so entrenched in Brazilian soccer culture that is now almost a must for every radio and TV play-by-play announcer, according to Santos, who informally asked the director of sports for Globo Television, Brazil’s largest sports station, if he would hire an announcer who didn’t cry “Goooooool!”

“It’s not written on a job requirement sheet, but everybody kind of knows you have to be able to do that to work in this business,” Santos related.

Announcers have developed many techniques to warm up their vocal chords and protect them from becoming strained during continuous game time screaming.

“A lot of these guys do exercises just like singers do,” Santos said. “They don’t drink distilled beverages because, for some reason, it affects the chemical balance of your vocal chords. They do things like eating apples before a game, because eating apples moistens the vocal chords.”

One Brazilian announcer, José Carlos Araújo even went so far as to take singing lessons.

“He compared the cry of ‘goal’ to the tenor high C, which anyone who understands opera knows is one of the most challenging notes a tenor can sing,” Santos added.

It is Araújo’s cry that Santos herself remembers most fondly. She grew up in Brazil tagging along with her father to the stadium to see soccer matches.

“He would sit there with his little radio and I would hear the voice of José Carlos Araújo every time any team scored,” Santos said. “When I met José Carlos Araújo, I had to hug him because it was kind of like meeting a piece of my past.”