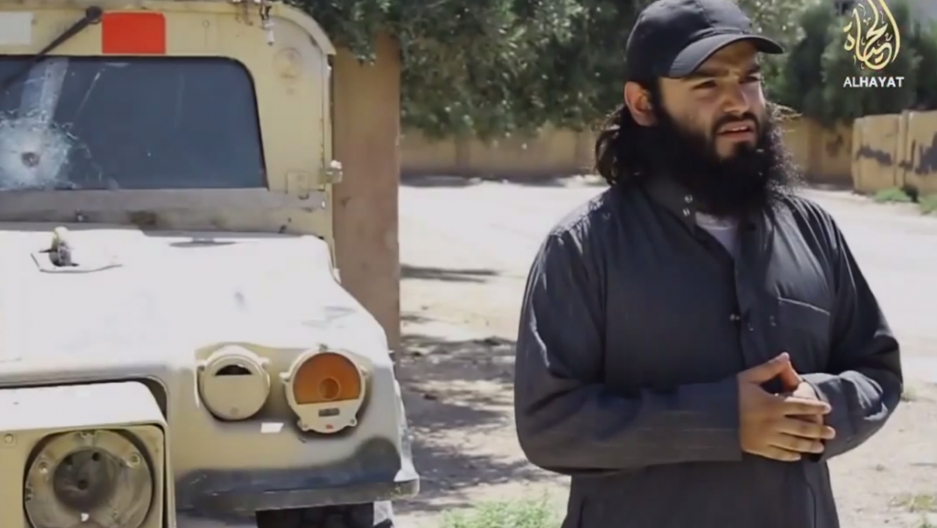 The Islamic State in Iraq and the Levant (ISIL), also known as ISIS, just announced the borders of its new Islamic State, and it looks like this:

That's the subject of the following video, "The End of Sykes-Picot," starring an ISIL fighter who goes by the name Abu Safiyya. Hailing from Chile and speaking excellent, accented English, Safiyya slams the "imaginary borders" established by Western powers in the early 20th century, literally walks across a strip of barren land that serves as the supposed border between Iraq and Syria, and mocks the failed US war in Iraq while standing next to a Ford F-350 pickup truck.

He seems to kind of know what he's talking about. (Although he loses some credibility when he starts insisting that most of ISIL's prisoners worship Satan.)

It's really hard to think of ISIL as both a militant group so violent that even Al Qaeda disavowed them AND as a group of individuals with historical knowledge and strategic interests beyond just causing death and destruction. But you might start thinking that way after watching the video.

Here's what Safiyya is talking about.

In terms of national borders, the Middle East we know today was largely created in 1916, when two diplomatic advisers — Britain's Sir Mark Sykes and France's Francois Georges Picot — got together in secret, looked at a map, and made plans for the region, which they hoped to win from the Ottoman Empire at the end of World War I.

There were plenty of French and British experts who might have known something of ethnic identities, tribal cultures, and theological divisions in the Middle East. Sykes and Picot were not those experts. And their goals in dividing the territories had less to do with establishing peaceful, stable Arab nations and more to do with furthering their own nation's ambitions and strategic interests. Britain was particularly interested in access to petroleum in Iraq. France, for their part, wanted access to Mediterranean harbor cities like Beirut.

Their secret map, known as the Sykes-Picot Agreement or the Asia Minor Agreement, established the geography of French and British colonial rule and influence. And it established national borders.

The reverberations have been felt in the region since.

"The artificiality of state formation has caused numerous conflicts over the last few decades," said Henner Fürtig, director of the Institute of Middle East Studies at GIGA research institute in Hamburg. "These questions haven't been solved for a century and burst open again and again, in a cycle, like now with the ISIS advance in northern Iraq."

For decades, the cobbled-together Sykes-Picot map was maintained through a combination of authoritarian rule and outside influence. But that's all been exploded, a result of many factors including the US invasion of Iraq in 2003 and the Arab Spring.

Fareed Zakaria, writing recently for the Washington Post, described this complex and unfolding history this way:

If you had looked at the Middle East 15 years ago, you would have seen a string of strikingly similar regimes — from Libya and Tunisia in the west to Syria and Iraq in the east. They were all dictatorships. They were all secular, in the sense that they did not derive their legitimacy from religious identity. Historically, they had all been supported by outside powers — first the British and French, then the superpowers — which meant that these rulers worried more about pleasing patrons abroad than currying favor at home. And they had secure borders.

Today, across the region, from Libya to Syria, that structure of authority has collapsed and people are reaching for their older identities — Sunni, Shiite, Kurd. Sectarian groups, often Islamist, have filled the power vacuum, spilling over borders and spreading violence. In Iraq and elsewhere, no amount of U.S. military power can put Humpty Dumpty back together.

And now we have ISIL creating a new map. They say they want to undo the legacy of Western colonialism, but they sure are wreaking a lot of havoc in the process. And it's hard to believe anything from people who play football with the decapitated heads of their enemies.