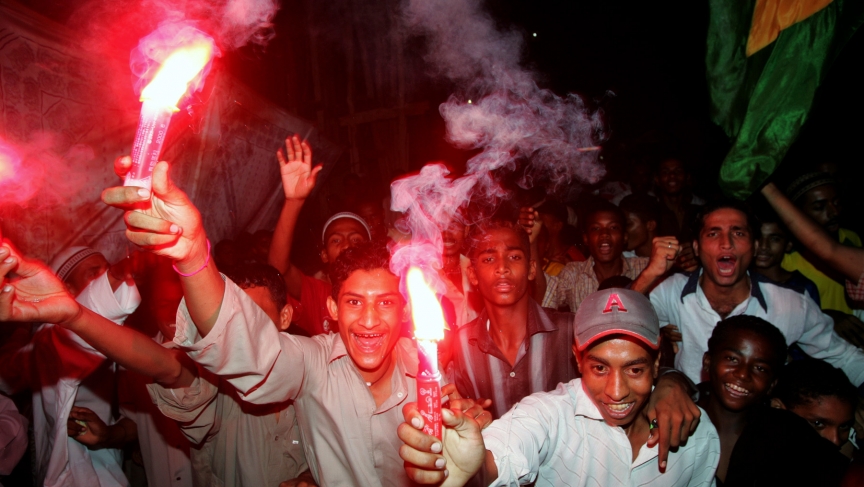 Pakistani soccer fans celebrate a Brazil victory in Lyari, one of the oldest and most densely populated parts of the city, plagued by street crime, drugs, and unemployment.
Credit:

In one of the oldest, poorest neighborhoods in the Pakistani megacity of Karachi, a place known mostly for the violence and gang warfare that have ravaged the area since the late 1990s, there is another legacy that goes much further back: soccer.

On a recent Saturday, in dozens of spots around the neighborhood, people bring television sets and projectors into the street to watch the knockout match between Brazil and Chile. Others head to a nearby sports complex for a screening, where hundreds of adults and kids arrive toting mats and picnic baskets.

Lyari is in love with Brazil.

Almost everyone here supports the Brazilian team, and residents proudly point out that the neighborhood has been labeled “mini-Brazil" thanks to its fervor.

“God willing, Brazil will win today and it will keep on winning," says one boy sitting on the ground surrounded by his friends. Other boys express their admiration for their hero, Neymar, a star Brazilian forward.

Karachi's roots in soccer go back to the days of the British Empire. As one of British India's key seaports in the early twentieth century, many ships carrying European sailors would dock here. In their free time, visiting sailors played soccer near the harbor and would invite locals to join them.

“This became a tradition — that whenever sailors came, these people used to go there and play with them,” says Nadir Shah Adil, a veteran journalist from Lyari.

While much of Pakistan took on the British game of cricket, says Adil, people in Lyari chose soccer. It wasn't just because of the European sailors, though. Soccer was also a much more affordable sport for poor Lyari residents.

As for the overwhelming support for Brazil, Adil believes the people here feel an ethnic affinity with Brazilians. Like many Brazilian players, a large number of Lyari residents have African roots as a result of the slave trade.

“They feel great resemblance when they see that Pele is just as they are," Adil says. "They feel similarity, and a sentimental attachment, when they see Rivaldo, Roberto Carlos or Adriano.”

The attachment to the Brazilian players is not just sentimental. Lyari is also known as a breeding ground for some of Pakistan's biggest soccer stars. At the match screening, there were several current and former professional players watching the game.

Ghulam Shabbir, an assistant coach for the National Bank of Pakistan's team, says the stigma of being from Lyari makes it difficult to get white-collar jobs. The discrimination is so powerful that many people here feel they have better career opportunities playing sports.

“I have a master's degree, but it’s of no use,” Shabbir says. “We are only given jobs because we are sportsmen. Because of the address on our ID cards, we are accused of being gangsters and terrorists. So if we don't play sports, then we'll go hungry.”

But even the opportunities in sports are drying up. The golden days of soccer here were in the 1960s, when the bulk of Pakistan's national team was made up of players from Lyari. But now there are better facilities and training academies in other parts of the country. Lyari has been left behind.

Lyari has also been affected by the neighborhood’s well-deserved reputation for crime and gang violence. Last year, a youth soccer tournament was bombed. Eleven people died, including several children.

But economic realities have not dimmed the passion for soccer — or for Brazil. At the end of last weekend’s game against Chile, the result came down to a penalty shoot-out. As Chile's Gonzalo Jara lined up a must-make penalty, everyone was on the edge of their seats.

Jara's shot banged off of the goalpost, giving Brazil the victory, and the neighborhood erupted. Everyone sitting on the ground jumped to their feet, cheering and running around with Brazilian flags. It was just as big a win for Lyari as it was for the World Cup hosts.