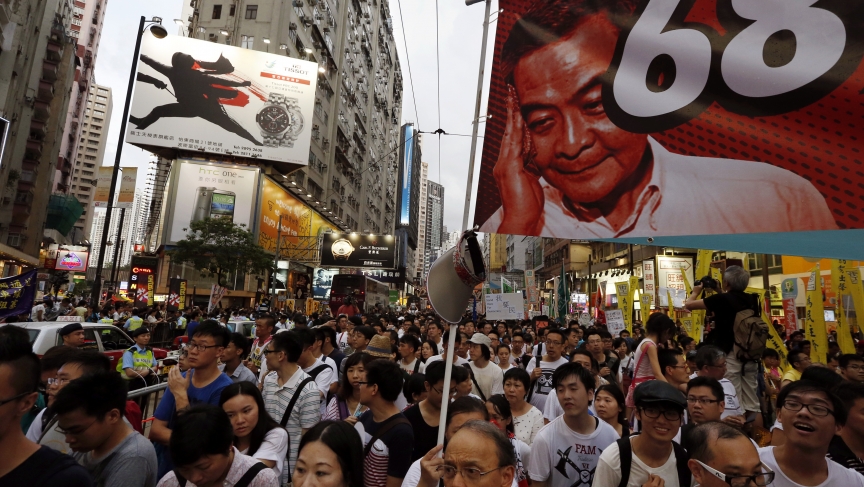 Protesters carry a banner with a portrait of Hong Kong Chief Executive Leung Chun-ying, as they join tens of thousands during a march to demand universal suffrage in Hong Kong July 1, 2014, the day marking the 17th anniversary of the territory's handover to China.
Credit:

Tuesday marked the 17th anniversary of the handover of Hong Kong to mainland China. And, in what has become an annual tradition, a hundred thousand or more residents took part in a pro-democracy rally to press for reform and free elections.

The demonstrators say China is clamping down on political rights and the media, while doing little to combat rising poverty and economic stagnation. Quartz reports that income inequality has grown dramatically in Hong Kong since the handover. Discontent is especially large among young Hong Kongers and students, who played a major role in the protest.

Organizers claim 500,000 people attended, while the police put the number over 90,000, either of which makes it the largest protest in the city in about a decade.

What will it take for Pakistan to make a rape conviction?

Zero. That's the number of alleged rapists who have been convicted in all of Pakistan over the last five years, according to a Pakistani lawmaker.

Syeda Sughra Imam, a senator from the opposition Pakistani People's Party, is pushing for constitutional amendments to tackle the problem. She wants to prohibit the publication of names of rape victims and increase punishment for officials who fail to properly investigate crimes.

The Express Tribune of Karachi reports that the chairman of the Senate's law and justice committee says that lawmakers will investigate whether or not the conviction rate is as dismal as Imam suggests. What's not in doubt is that rape is a major problem in the country. In one study, 66 percent of women across six Pakistani districts said they had experienced sexual violence.

Brazil's biggest World Cup fans may be in Pakistan

In a crime-troubled neighborhood more than 7,000 miles from Rio, Brazil has fans so fanatical that their area has been named "mini-Brazil." The real name is Lyari, a slum in Karachi that has bred many of the best Pakistani soccer players — albeit in a country that cares more for cricket than soccer.

PRI's The World went to watch Brazil's latest World Cup game with residents of Lyari, who feel distant ties of kinship with Brazilians. In both places, Europeans not only brought soccer, but slaves. While Lyari's golden age of producing soccer stars has faded as crime and violence have mounted in recent years, the area's passion for the sport and their adopted heroes in Brazil hasn't faded.

Here's the guy who invented hayfever

The start of summer is among the worst times of year for hayfever sufferers. But the malady didn't even exist — or at least had a name — until 200 years ago. That's when a London doctor, John Bostock, cajoled his colleagues into accepting hayfever as an ailment resulting from an allergy to pollen.

For a time, hayfever was considered a disease of the aristocrats. Now one in four people in Bostock's native UK suffers from hayfever. The BBC looks at how Bostock, himself a sufferer, got his medical colleagues to embrace diagnosing and treating hayfever.

The US is one of a handful of countries that has not signed onto a global ban against the use of land mines. But this week, the US did agree to stop making new mines and renewing the land mines it still has.

That move effectively puts a 20-year-clock on the remaining stockpile, which degrades over time. Nobel Prize-winner Jody Williams was behind the global ban in 1997. She talked to PRI's The World about the pressure on the US to give up its land mines, which the US believes are critical to its defensive formations on the Korean peninsula.

It's been a wet spring for Winnipeg residents. In fact, June marked the wettest June, ever; the wettest month, ever; and it closed out the wettest spring, ever. So you'll understand that Winnipeg resdients are thrilled with forecasts for a warm — and dry — July. The Winnipeg Free Press reports.