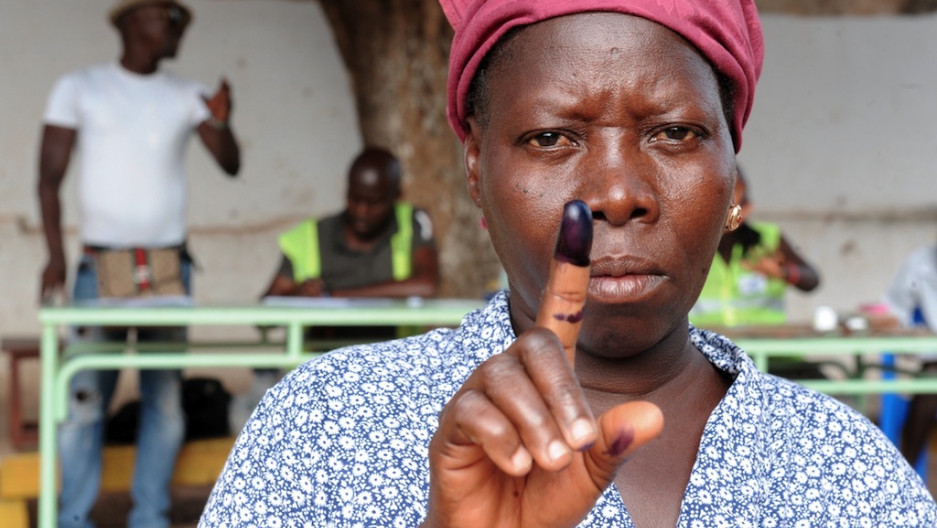 A woman raises her ink-stained finger after voting in the second round of the presidential election on May 18, 2014 in Bissau. Guinea-Bissau voted for a new president on May 18 in a key test for a fragile state plagued by powerful cocaine cartels and upended in a military coup two years ago.
Credit: SEYLLOU
Share

Two weeks after UN Special Envoy Angelina Jolie and British Foreign Secretary William Hague’s four-day summit to end rape in war, media coverage has died down and the international community has been left with one question: do these wildly popular conferences actually effect change, do they fall flat, or worse, pose a threat to the work many are doing on the ground in every continent, nation and state? In this conversation with RIGHTS, Sanam Naraghi-Anderlini, senior fellow at MIT Center for International Relations and co-founder of the International Civil Society Action Network (ICAN), explores traditional conferences and alternative approaches to tackling violence against women. Transcribed below is part two of a two-part Q&A. Read part one here.

RIGHTS: In terms of tackling sexual violence in conflict, what is enough?

SANAM NARAGHI-ANDERLINI: It’s complex but if we’re serious we have to think broadly and outside of the box. A group of us were invited in 2012 at the beginning of the PSVI [Preventing Sexual Violence Initiative] to help inform the United Kingdom government’s thinking. We all said first, prevention is really important, whether you start with prevention of war, which is critical, prevention of rape in refugee and displacement settings, there are plenty of specific measures that can be put in place. Secondly, you have to shift the shame and shift the fear of sexual violence away from the potential victim to the potential or actual perpetrator. So, the guy who is about to rape — what do we need to do to get into his head, for him to be fearful of raping? What do you need to do for the community to isolate and shame the men who are committing the honor killings?

What scares the hell out of a militia fighter or an army officer in Democratic Republic of Congo? What would scare him the most — perhaps the idea of losing his virility? Court clearly doesn’t scare anybody because the vast majority of them are never going to see court.

More from GlobalPost: Seeking justice for victims of rape in Minova, DRC (VIDEO)

These are just some of the questions we could be asking. We should be creative in our approaches and work with religious leaders, musicians, sports figures, business people, etc., to get the right message through, so that the solutions or prevention tactics used are tailored to different contexts.

There’s a psychosocial approach to consider if we’re serious about what a friend of mine calls these ‘guerrilla tactics.’

But the UK approach is to focus on investigation and documentation. Jolie and Hague’s protocol was also about documentation — so that we can eventually bring to prosecution, but that’s not exactly prevention. That’s after the fact for the people who have been raped. It’s essential for a victim's justice but is it prevention? I’m not sure, even if we saw 1,000 guys being brought forward to be prosecuted for rape, whether that stops the next country or the next round of people from doing it. Documentation is very important, but not sufficient. I just hope it’s a first step and that they will continue to build more into this initiative.

RIGHTS: At a panel I recently attended, on rape in DRC, activists from Goma and surrounding areas said that rape is “just the tip of the iceberg.” The activists argued that in order to stop rape in DRC, you have to stop looking narrowly at rape, and address the conflict over resources — essentially that the prevention of war, or elimination of war, as you mentioned, would dramatically decrease violence against women. Would you agree?

SNA: Yes. You cannot separate sexual violence from the political economic cultural context in which it is occurring. DRC is partly about mines. It’s about various countries fighting over these resources and the corporations behind the conflict. So why not have a high summit with the countries to determine how they are going to share those resources and stop this fighting and stop these proxy wars using militias and armies? Researchers can trace it back to the companies that benefit too, but at the end of the day if we know that these militias are being backed by various countries, bring those guys together to the table and figure out what’s the best way of sharing the resource and ending the violence.

RIGHTS: In the op-ed you published prior to these conferences you said, “It is an insult to the women and girls of these countries to see their political leaders applauded in London for promising to take action in the future in their capacities as international peacekeepers, while today the reality on the ground is often one of impunity and inaction.” Can you talk more about why this is problematic?

SNA: The idea that we congratulate governments for signing up to pledge is awful. Why don’t we have a standard where we say, “for you, government X, to be recognized as part of this group of countries that’s doing something positive, you have to be doing at least this minimum standard of work.” Why don’t we set a bar that determines who gets to be included and who doesn't?

Why is it that when it comes to human rights or any inclusion in peace processes, we say “OK, we’re going to have the policy, we’re going to make fantastic speeches, but we’re not actually going to do the work.” You’ve got to do the work and then you have to keep improving on what you’ve done, like every other profession. If you look at the world of finance, every year there’s a new policy or new rule that comes out about money laundering and ethical standards, and people try to get around them but the individual fund managers are held liable if they’re not abiding by those rules. In our world, we have those rules and norms but it’s a cafeteria approach — we’ll do this one but not the other.

And when it comes to women, everything is constantly questioned. Anything to do with the discourse on women in conflict, women in peace and security for the last 15 years, is rooted in women’s voices from war zones. And what those voices say is that they need engagement, not accommodation. They want to be involved in decision-making systematically, not just the odd meeting or ‘consultation.’ They talk about a space to have their voices heard. They also say that the overwhelming focus on women as victims coming from the west can undermine their efforts.

Yes, the attention of a conference is really good, and we’re not against what Hague is doing or what’s happening, but this is about transforming the way we do business. It’s not just being 'nice' to women.

I worry that the constant reiteration of the same messages without adequate action and profound change is like reinventing a very, very dodgy cracked wheel.

RIGHTS: Is there a point where the dodgy wheel becomes a dangerous one?

SNA: Yes. First, when Western countries wag their fingers at the rest of the world and say “you rape your women!” that doesn’t really open the door for dialogue. It puts up a huge defensive wall.

Number two, when countries do sign up to these protocols of ‘protection’ without real action they perpetuate the patriarchal mentality that says, “yes, we have to protect our women, these poor women need our protection.” They’re allowed to play the wolf guarding the chicken coop without being held accountable for anything. And those two dynamics can become dangerous because part of the rhetoric of some extremist Islamist groups — in Libya, for example — is to say “yes, it’s very dangerous for women to be out in the public space — get back inside!”

It’s reframing and shaping this notion of power that’s really important and I do find it a bit appalling that when it comes down to Western countries they will say women should be at the table, but where are they? It may be taboo to critique Hilary Clinton on this but she was Secretary of State when the Libyan crisis broke, what did the US do to hear and ensure that Libyan women — who were leaders in the protests — were heard once the west recognized the self-proclaimed opposition leaders? Did Clinton ensure Afghan women a formal seat or space on the agenda of the [2012 NATO] Chicago summit? Not really.

How sad that we have a summit as big as this and the theme wasn’t also and equally about women as decision makers for peace, or involved in peace and security. It was about women as victims.

Which government will bring 155 different countries together to say from now on the voice of civil society, the voice of women on the ground, the voice of our youth matters in decisions of peace and security for our countries? We’re really going to implement the resolutions that we have. Why don’t major world governments have the guts to do that kind of work?

We really need this now. With the rise of extremist groups, and their sophisticated use of social media and messaging, we can’t afford to exclude and marginalize the moderate actors — the ones who are on the frontlines, fighting for peace and rights and justice peacefully.

At the end of the day what we say in London or New York only matters in terms of its impact on the ground. If women in war zones say they don’t feel the impact on the ground, or that our policies and strategies are doing more damage, then whatever it is that we’re doing isn’t the right thing. It doesn’t mean we give up. It means we listen and together with them do things differently.