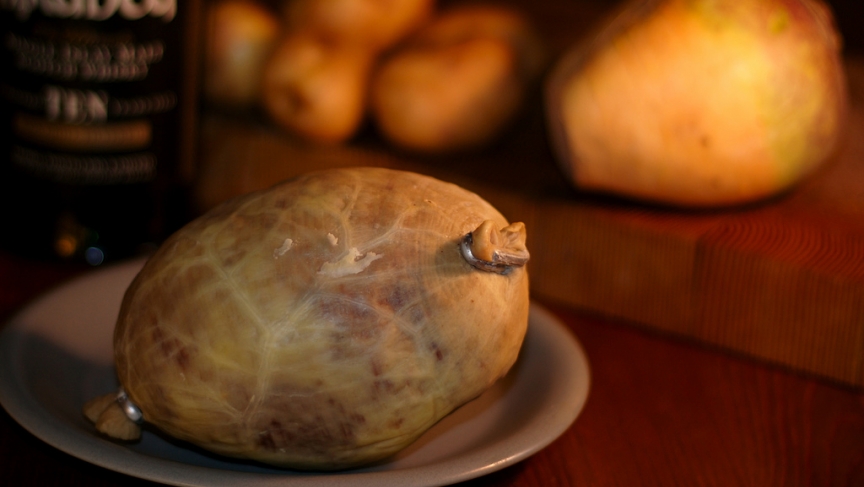 Haggis imports have been outlawed in the US for more than 40 years.

Now, the UK government is hoping to overturn the import ban on the traditional Scottish dish that's made by stuffing a sheep's stomach with diced sheep's liver, lungs and heart, oatmeal, onion, suet and seasoning.

The reason for the ban is because sheep lungs are prohibited in food products in the US. The USDA's Food Safety Inspection Service considers sheep lungs an adulterated food item; research shows they too often contain "stomach contents, lesions and bacteria."

But, according to the BBC, UK Environment Secretary Owen Paterson is expected to raise the issue with Obama administration officials this week.

Scottish TV chef Hardeep Singh Kohli is a great fan of haggis. “What is haggis? Can one sum up such an institution of food in mere words?" he asks. "Haggis is beauty. Haggis is poetry. Haggis is delicious. Haggis is the entrails of animals.”

“The thing about haggis that’s quite surprising is its spiciness. It’s very peppery.” And he says modern chefs are taking haggis to the next level. “There’s some more exotic seasoning in the more modern batches.” Some varieties include cayenne pepper and, others, celery salt.

“It’s the seasoning really that elevates it to another place,” Kohli says. He says he always enjoys watching what he calls “haggis virgins” as they tuck into a plate and seeing “their faces change with delight.”

“It’s incomparable. It has a beautiful texture … You have nuggets of flavor exploding across your tongue," he says.

“I am the microcosm of haggis myself," Kohli explains. "My heritage is from the northwest of India: The Punjab, the land of spice, the land of strong flavors and great food. And I’m from Scotland, grew up in Glasgow. And, in a way, that is what haggis is: very Scottish ingredients with this twist of spice and flavor.”

Kohli says haggis also makes a great accompaniment, such as in the popular Scottish dish called "balmoral chicken." That's a chicken breast stuffed with haggis, wrapped in parma ham, and then poached in white wine with garlic and cream. Kohli calls it an “entry-level” experience for people not used to haggis.

Many people, including some Scots, find haggis revolting. When challenged as to whether haggis is truly popular in Scotland, Kohli insists that it is, indeed, widespread. He argues that it’s even becoming more popular with the recent resurgence in Scottish culture. “Increasingly, chefs across the UK and across Europe are discovering haggis as an ingredient that gives that punch of flavor," he says.

He expects real haggis to become popular in the US if the USDA is persuaded to lift its ban.

Here in The World’s newsroom, haggis delights some, and disgusts others. What do you think? Let us know in the form below.