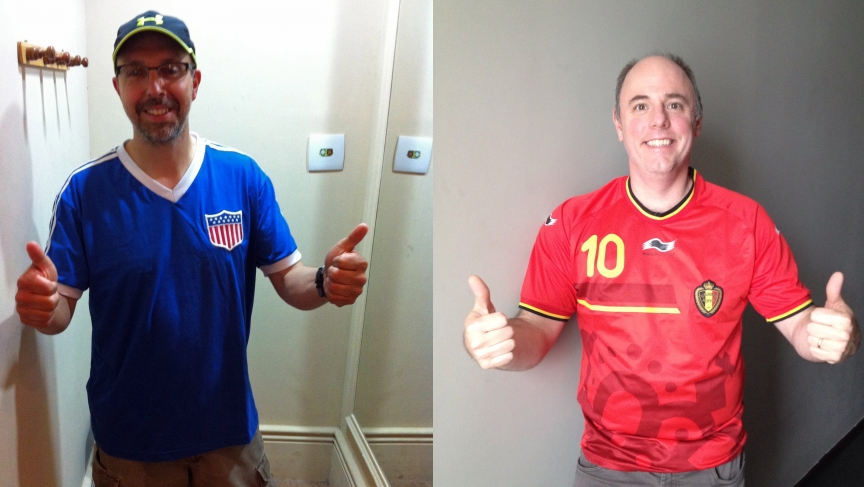 The big showdown Tuesday between Team USA and Team Belgium is causing divided loyalties for the staff of The World.

The World's soccer super-fan William Troop is in Brazil to see some World Cup matches. He attended Sunday’s game in the northern city of Recife between Costa Rica and Greece. That gamed ended with Costa Rica winning in a penalty shoot-out.

“The players were exhausted," said Troop."I can tell you from my own drenched shirt that the humidity was over 90 percent. It was exhausting to be out there as a spectator, I can’t imagine playing. And these guys were giving it all on the field.”

He's flying on Tuesday to Salvadore to see the second round game between USA and Belgium.

"I have my American flag and my US jersey ready to go. So I'm ready as I'm going to be. I've seen Americans on the planes and walking around in the cities we've been in. They seem just as pumped as I am," he said.

“The entire country is geared up for tomorrow’s match. Everywhere you look there are Belgium flags out — much more than I’ve ever seen. It’s amazing, just the spirit here," he said.

So will it be USA or Belgium? Well, according to our game-predicting ocelot, Izzy, it's going to be Belgium coming out victorious.

But Clark Boyd is less than impressed.

"What can I say? I'm so happy that a small-brained feline has decided that Belgium is going to win the match tomorrow," he said.