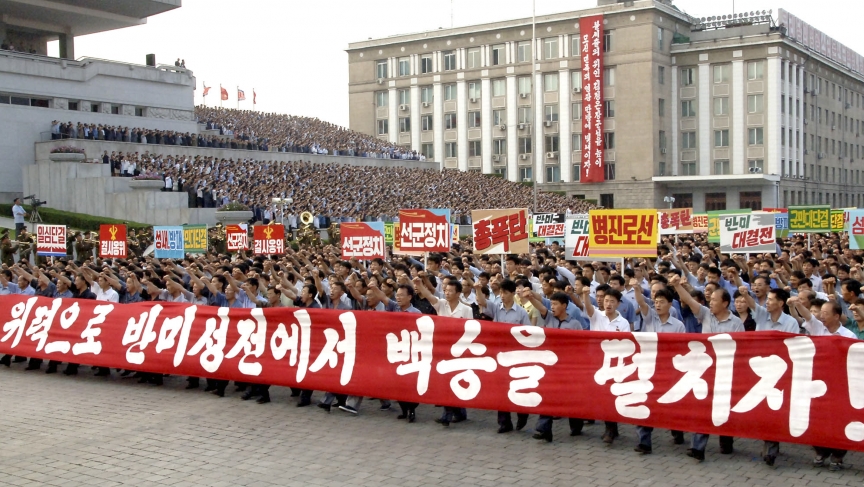 Jeffrey Fowle and Matthew Miller both travelled to North Korea in April on approved group tours for foreign visitors. Now the men are expected to be put on trial by one of the world's most isolated and oppressive governments.

The indictments for Fowle and Miller were announced on Monday by the Korean Central News Agency, North Korea's official state outlet. The two men face unspecified charges of acting against the North Korean state. At least one other American citizen, Kenneth Bae, was sentenced last year under the same broad category to 15 years in a North Korean prison. To make some sense of what the charges mean, PRI's The World spoke with Adam Cathcart. He's an expert on northeast Asia who lectures at Leeds University in Britain. The following is an edited transcript of the interview.

What do we know about these two men?

We know that one of them has a track record of being interested in Christianity and might be disposed to missionary activities. He's Jeffrey Fowle and he's 56 years old. The other man, Matthew Miller — who is 24 — all we really know about him is that he reportedly tore up his visa when he arrived in North Korea and asked for asylum. So we're talking about two very different ends of the spectrum when it comes to views on North Korea — one person ostensibly going into the country to try to encourage a revival of Christianity, which the state is opposed to, and then another man saying, essentially, 'Here I am, take me in!' The state responds very poorly to both of those trends.

Why did North Korea respond poorly in the case of Miller? Wouldn't it be just as much of a PR coup to welcome someone who wants asylum?

I think North Korea doesn't really trust people. Statements of intent don't mean so much. Finding avenues of cooperation with North Korea is a lot harder than you might imagine. There's a lot of distrust between agencies. While it could be a propaganda coup, the downsides could outweigh the positives.

When are these trials supposed to take place? They're not happening immediately, as I understand it.

No, and that's the thing about the North Koreans controlling the tempo. They had a trial of a very, very important North Korean — Chang Song-thaek, the uncle of the current leader, Kim Jong-un — last December. And the trial happened in a day or two. It was about as rapid a legal occurrence as you could imagine. The fact is, they're not gathering more evidence [with the cases of Fowle and Miller] or taking more time to do the investigations. It's just, basically, these trials are being done when it's politically expedient for the country and when there are more foreign eyeballs on North Korea.

How is the case of Kenneth Bae different from these other two men?

His background is connected to China. There is more documentation about his desire to set up a revival of Christianity in North Korea. He's also ethnically Korean. He speaks the language. So this is qualitatively different. Here's a person, according to North Korea, that's trying to set up networks inside of North Korea — long-lasting networks that would resist the state and where Christianity would be used as a lever in that regard. So his case is different, and that's one reason why he's not really a bargaining chip at the moment. He's just serving out this 15 year sentence and nobody I've spoken with has any hope that that will be rescinded.

Why is North Korea so allergic to any kind of religious activity?

I think it goes back to the origins of the state and the division with the South. There used to be a large number of Christians in the North and Pyongyang. In fact, it was kind of a hub for Presbyterian activity. They used to call it the Jerusalem of northeast Asia. But with the Korean War, many Christians went to the South. Prior to the Korean War, there were strong attacks and pressure put on Christians to leave the country. Since then, people like Billy Graham will occasionally go to North Korea. There is a church — it's a Russian Orthodox church. [The government says] religion is part of the country's constitution and people have the right to practice what they like. But in fact, the state religion is more or less "Kimism," or the worship or deificaton of the leader — including all three generations of Kim leaders — which is one of the most interesting and disturbing aspects of where the new North Korea is going. It's essentially heading in the same direction as the old North Korea, more or less worshipping a 30-year-old dictator.

China's president, Xi Jinping, is visiting Korea this week. And he's going first to South Korea and later to North Korea. That's a change in routine for China. What does it mean?

This is part of what China wants to get across to North Korea, which essentially goes like this: "We're going to treat you more like a normal country. Yes, we've had a special relationship in the past, party to party" — the Communist Party of China has connections with the Workers' Party in North Korea. "But there are red lines, and you are stepping over them." North Korean activities around the nuclear issue, missile testing, even action along the Chinese-North Korean border, are things that China doesn't approve of. These include refugees, drug running, all kinds of things. There are many, many irritants in this relationship, but the nuclear one is foremost. And I think that China is trying to say that more change could be in the offing if things continue in this direction.

The US State Department has a travel warning for Americans that says they shouldn't go to North Korea. What is the reality about how safe it is to go?

The reality is that even last spring, in 2013, there were nuclear war rumors and things were tense — but tours were still continuing. The BBC's John Sweeney went and there was a lot of drama around his visit, but, in fact, it was quite a safe visit. There was no danger of conflict breaking out. For Americans in particular, though, it's difficult. Because should you get into any trouble — if there's an accusation about a photo that someone doesn't like, or that you might be trying to speak with people you're not supposed to be speaking with — basically, your only recourse is the Swedish embassy. So that's where these two Americans are having to liaise with, and so have previous Americans in detention there. That's why the State Department issues these travel warnings, because there is no diplomatic infrastructure. There isn't even a liaison office like the US had in China during the 1970s.

How many Americans visit North Korea every year?

I don't have precise figures, but I think it's between 300 and 500. But there are a lot of groups doing great work. There's a group called Pyongyang Project from Canada that brings people to northeast China to learn some Korean, and they take people into North Korea. Chosun Exchange is trying to work with North Korean business people, trying to build up a new generation of young, urbane business class. They go Singapore, they're in North Korea, and they bring people in occasionally. They bring in experts. So it's not that the country is absolutely closed and there's no way to get in and it's all cloak and dagger the minute you get there. There are people who make a habit about going to North Korea — tour operators, small business people, NGO types. But I think the challenges are absolutely massive. North Korea's openness is something that's famously problematic. There's a lot of paranoia built into the system.