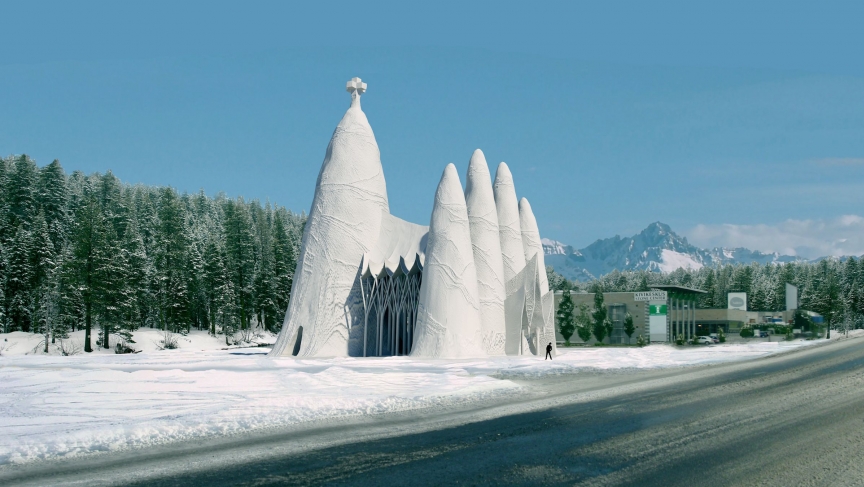 Barcelona's famous Sagrada Familia is built to last, but it's still not done. Students want to build a model of the famous church, as shown above, out of ice.
Credit:

Courtesy of Sagrada Familia in Ice

The famed Catalan architect Antoni Gaudí spent 4 decades working on his Sagrada Familia church before he died in 1926 — his masterpiece still less than a quarter done.

Yet his grand project didn't die — though given its slow progress, you'd be forgiven for thinking it did. It is planned to be completed between 2026 and 2028.

Fortunately, for the impatient, a group of students at Eindhoven University of Technology plan to build a complete version well before then — out of ice. And they've created the architectural rendering above to show how it will look. Quartz reports that the group aims to complete their 1:4 scale model in just three weeks.

For this Canadian journalist, heroism ended in an Egyptian prison

Mohamed Fahmy grew up in Egypt, but emigrated to Canada with his family when he was 17. He returned to report on the 2011 Egyptian revolution for CNN. And during that time, he was known for fearless coverage.

Canada's Globe and Mail reports that in one situation, he ran across a PBS NewsHour reporter and crew being chased by an angry mob and helped them escape through the streets of Cairo he knew so well from his childhood. But his career was silenced in December when he was jailed by Egypt's military government. At the time, Fahmy was Cairo bureau chief for Al Jazeera English.

Last week, he was sentenced to seven years in prison for "being a mouthpiece of the Muslim Brotherhood" — charges that have been blasted by governments around the world.

Is haggis the next American fast food?

The national dish of Scotland, haggis, is a sausage made from diced sheep's liver, lungs and heart, oatmeal, onion, suet and seasoning, all stuffed into a sheep's stomach. And it is loved by many, even outside of Scotland. But haggis is banned in the US.

It turns out that sheep's lungs are considered unsafe by the USDA for having "stomach contents, lesions and bacteria." Now, UK officials are hoping to get the ban overturned so the national dish can be enjoyed by Americans.

PRI's The World interviewed a Scottish TV chef about the appeal of this dish. More than 150 people have said they would eat it in on our online poll. Share you opinion.

Blackwater was the private security firm that got a billion-dollar contract to protect US personnel in Iraq during the war. The company's lawless tactics came under scrutiny in Iraq and the US after its guards killed 17 civilians in 2007, outraging Iraqis and sending a shadow across the US occupation of Iraq. But it gets even worse.

On Sunday, the New York Times published a report saying that the State Department sent an investigator to look into Blackwater even before the civilian deaths. Blackwater's top manager threatened to kill the investigator, insisting he could do it with impunity. In spite of charges of Blackwater's misconduct and lax oversight, the investigators were sent home.

Four Blackwater guards are now on trial because of that civilian shooting. The company has changed ownership and names at least twice since then.

If you are a French soccer star, odds are you aren't playing for France in the World Cup

France is a country where soccer is more than a sport. And that importance can be seen in the number of French-born players participating in the World Cup — on teams that aren't France. In fact, a full 25 French soccer players are playing on five other World Cup teams this year — 16 of them playing for Algeria, a former French colony.

PRI's The World looks at the issues of nationality and identity that help explain why France exports so many soccer players. And our graphic shows where they go to play.

The overdue Atlantic hurricance season may finally get started this week. The US National Hurricance Center lists an 80 percent chance that a storm currently swirling between the Bahamas and Florida will become a hurricane. It's drifting southwest, but is expected to surge back north and west toward Florida in the days ahead, perhaps by Thursday.